Tribeca 2021: Randall Okita and Skyler Davenport talk ‘See For Me’ 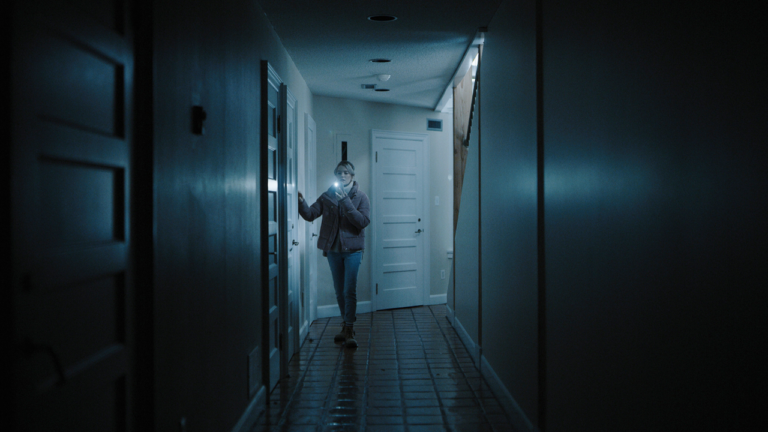 As the 2021 Tribeca Film Festival winds down, tension-filled home invasion thriller See For Me — centering on Sophie, a blind woman house-sitting in a remote mansion during a break-in, who uses a new app to connect with a military veteran to acts as her eyes over a video chat connection — remains one of the highlights. It’s a film that plays fast and loose with genre conventions, eschewing them at key points and embracing them elsewhere, and featuring a protagonist whose moral complexity adds an interesting and unique wrinkle.

“It came to me as this incredibly fully formed thrill ride that had all these resonant layers of character,” director Randall Okita told us via Zoom, the morning after the film’s Tribeca debut. “The different ways [technology] can help fill in the gaps that are faced by differently abled people presented this really delicious opportunity.”

Authenticity was a crucial component, and although screenwriters Tommy Gushue and Adam Yorke had done their homework — Okita said they had numerous conversations about “the nature of assistance and what it means to ask for help” — he also relied heavily on the perspective of his visually impaired star, Skyler Davenport.

“The whole physicality of Sophie is from my own personal experience,” Davenport told us, praising the open communication and Okita’s willingness to make changes to ensure accuracy. “There were one or two occasions where I had to say ‘I don’t think this is going to read the right way,’ having experienced a situation like this myself and being visually impaired. Randall was there to coordinate all of that.”

One area where Davenport couldn’t quite relate was Sophie’s anger and bitterness, and the morally questionable choices she makes during the first half of the film. “I feel like Sophie and I were put in the same circumstances, but had polar opposite ways of dealing with it,” said Davenport. “I just naturally come from a more tender place and have had to work my way into being tougher and independent, but I think Sophie was the opposite, where she’s almost independent to a fault.”

The tense game of cat-and-mouse that plays out over the course of See For Me made it necessary to find the perfect location, and Okita “hunted high and low” before coming across the sprawling manor where the film takes place. “The combination of warm wood finishes and the unique details, and these floor-to-ceiling windows and these long and narrow passageways” provided plenty of fodder for cinematographers Jackson Parrell and Jordan Oram, including a spectacular ultra-wide shot where Sophie can be seen sneaking down the hallway at one end of the frame while the burglars hunt for her at the opposite end.

“It’s like a little ant farm!” Davenport said with a laugh.

Okita called the experience of shooting during the pandemic “difficult and joyous,” praising both the cast and crew for their work. He and Davenport were pleased with See for Me‘s initial reception at Tribeca, and Okita hopes the film’s “sexy and scary” vibe and frequent subversion of genre tropes will continue to resonate with audiences. “As somebody who loves to talk about ideas, it’s easy to come up with an interesting premise,” he said. “But it’s also about making sure we deliver.”

See For Me screened at the 2021 Tribeca Film Festival. Find more of our festival coverage at this link.