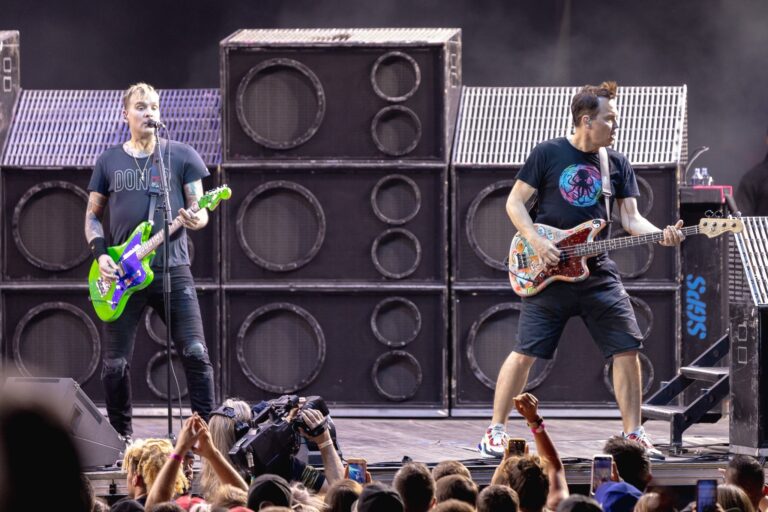 PHOENIX — It may have been two decades since the release of Blink-182’s breakthrough album, Enema of the State, but if Monday’s performance at Ak-Chin Pavilion was any indication, the band hasn’t lost sight of the juvenile humor that has long been their trademark. Dusting off tracks like “Family Reunion” — a gleeful 30-second celebration of profanity — and joking about “shooting our load too soon” when a volley of streamers became entangled in the rafters overhead, Blink-182 proved they still haven’t grown up.

As the band played through Enema in its entirety, the departure of founding member Tom DeLonge was particularly felt on tracks like “All the Small Things” and “Aliens Exist,” the latter of which found the band launching dozens of inflatable aliens into the crowd — perhaps a jab at DeLonge’s known fascination with UFOs and conspiracies about extraterrestrial life. Alkaline Trio frontman Matt Skiba, who replaced DeLonge in 2015 and toured with the band in support of 2016 release California, did an admirable job of filling in, and original members Mark Hoppus and Travis Barker sounded as good as they ever have.

Post-Enema (heh), Hoppus and Skiba treated the lawn crowd to acoustic versions of “Down” and “Wasting Time” before disappearing to make way for the biggest spectacle of the evening, a drum solo that found Barker in an enormous gyroscope-like metal sphere that levitated and rotated while he pounded away. The evening closed out with the band’s first mainstream hit, “Dammit,” culminating with a massive blast of confetti and a thunderous ovation from the audience.

Check out photos from Blink-182’s performance at Ak-Chin pavilion below, along with remaining tour dates, including a few festival stops.