Movie Review: ‘Dora and the Lost City of Gold’ 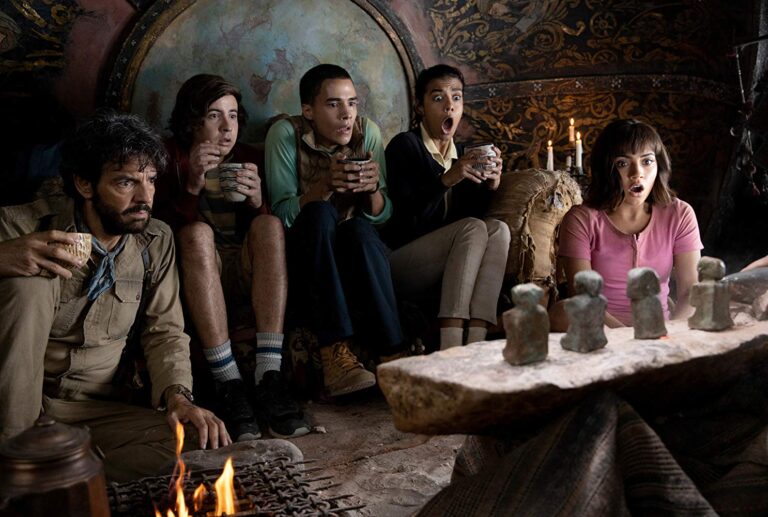 If you think beloved children’s cartoon Dora the Explorer seems like an odd choice for the big-screen live-action treatment, you’re not alone. The series was always meant to be more of an educational tool than a vehicle for entertainment, and some if its most recognizable elements — a talking backpack, a monkey in red boots and a kleptomaniac fox named Swiper — are incongruous with a realistic setting. And yet, Dora and the Lost City of Gold not only manages to make some of these weirder elements work in the context of the larger narrative, but also delivers a surprisingly enjoyable adventure at the same time.

After a brief prologue during which we’re introduced to 6-year-old Dora (and some of the aforementioned tropes of the series), we leap forward an entire decade to find the teenage adventurer (Isabela Moner) being plucked from the jungle and deposited in Los Angeles, where she’ll be attending high school alongside her cousin Diego (Jeff Wahlberg). Despite sharing a very close bond as children, Diego is firmly focused on navigating the complicated waters of high school and has zero patience for Dora’s wide-eyed exuberance or complete obliviousness to social cues. When she arrives for the first day with a backpack full of flares, camping gear and a personal generator, Dora is immediately ostracized, but while she barely seems to notice the stares and snickers, Diego is left distraught at the very notion of being associated with his cousin.

Reluctantly paired with Dora for a class field trip to the natural history museum, Diego tries to play it cool in front of class know-it-all Sammy (Madeleine Madden) until the trio — alongside uber-nerd Randy (Nicholas Coombe) — find themselves embroiled in a kidnapping plot. It seems Dora’s parents (Michael Peña and Eva Longoria) are hot on the trail of Parapata, a fabled lost city with untold riches, and a group of mercenary treasure hunters intend to trade Dora and her friends for the location. Help arrives in the form of Alejandro (Eugenio Derbez), a former colleague of Dora’s parents who spirits the children away into the depths of the jungle, with the mercs — and a talking fox — in hot pursuit.

Dora and the Lost City of Gold is a goofy, light-hearted riff on the Indiana Jones films that never shies away from poking fun at cinematic cliches — or itself. When entering an ancient structure, one character eagerly begins pulling levers, citing his knowledge of “jungle puzzles” from viewing so many adventure movies. In another sequence, director James Bobin (The Muppets) cleverly utilizes animated versions of Dora and Diego that hearken back to the original series, and Sammy takes issue with the fact that Swiper wears a mask — “why does that fox need to remain anonymous?” — but seems completely untroubled by his ability to speak.

Moner is perfectly cast in the leading role, portraying the same cheerful demeanor and positive attitude as her animated counterpart, which stands in stark contrast to most of her classmates. The fish-out-of-water humor is reminiscent of the Brady Bunch films of the mid-90s, with Dora keenly unaware the rest of the world sees her as an outcast. Even when she comes to this realization, she soldiers merrily onward, steadfast in her belief that trying to be anything but herself will only result in unhappiness. That a film with so much humor and entertainment also bakes in an excellent message for young people to take away is just an added bonus.