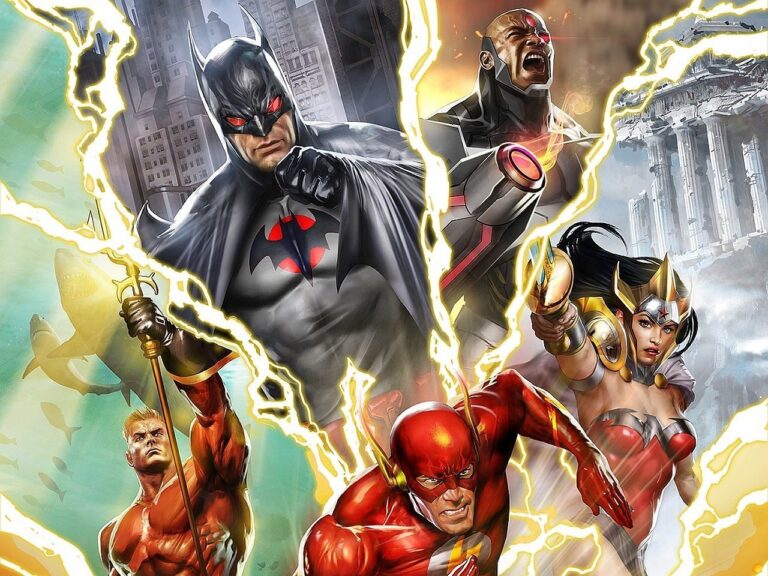 DC Entertainment has given fans some great animated film content and whole heapings of starring roles for Superman, Batman and even Green Lantern and Wonder Woman. But what about the beloved heart of the Justice League, the Scarlet Speedster aka The Flash? Especially with rumors swirling of a Flash major motion picture set in the Man of Steel universe, you’d think he would have gotten the spotlight already. Well, this may not be his own self-titled adventure but Barry Allen/The Flash takes center stage in the latest effort from Warner Bros. Animation, Justice League: The Flashpoint Paradox.

[pullquote_left]This may not be his own self-titled adventure but Barry Allen/The Flash takes center stage.[/pullquote_left]The story is an adaptation of the DC comics event that ended the last of era of continuity of the DC universe and ushered in the much hyped “New 52” – basically a reboot, if you want to use the ugly “R” word. As with most universe-altering events the basis of the story involves time-travel, with The Reverse-Flash/Professor Zoom aka Eobard Thawne deciding to use the speed force to go further back in time and alter minor events, creating a butterfly effect that drastically alters the world much for the worse, with intention of mentally and physically crushing The Flash.

Barry Allen/The Flash wakes up at his job at the police station but finds things shockingly altered and the world on the verge of war with certain key figures in his life returned, gone or drastically changed. While the mystery unravels and he attempts to figure out just what has happened to everything, he crosses paths with the “Flashpoint” versions of his Justice League teammates, unveiling a much darker and dangerous world.

The raw brutality aside, the film does a nice job of condensing the Flashpoint arc from the comics and making it cohesive enough for people who haven’t followed recent storylines. It does get a bit muddy at points and the narrative throws a lot of info at you with quick lines of dialogue, but enough explanation is given so you can just roll with the story and enjoy the epic action instead of worrying too much about those pesky logic details. The desperate and blood-soaked final battle will leave a few jaws dropped, not to mention they nailed (for the first time) how neat it would be to see two speedsters throw down at high velocity, and in doing so may have just made a moving storyboard for how to choreograph such scenes for whichever filmmakers are mulling over bringing The Flash to the big screen.

The weakest elements of the film come in its campy moments, with Flash’s hokey rogues gallery and plenty of lame one-liners peppered throughout that belong in a more all-ages appropriate movie. Also, I know time-travel is the basis of the story but there’s just something that feels cheap about a narrative that has stakes that can easily be remedied because Hey! It’s time travel!!

[pullquote_left]There’s just something that feels cheap about a narrative that has stakes that can easily be remedied.[/pullquote_left] The voice cast is eclectic but still top-notch, with a large list of names portraying characters from both the regular DC-verse and Flashpoint-verse. Justin Chambers (Grey’s Anatomy) takes on Barry Allen/The Flash and plays him fairly well in a straight-forward and more stoic lead hero version of the speedster. C. Thomas Howell is his nemesis, Professor Zoom/Reverse-Flash/Eobard Thawne, and is unrecognizable and a bit silly but in contrast has some chilling moments as the film’s heavy. In a welcome addition, Kevin Conroy and Nathan Fillion reprise their fan-favorite roles as Batman and Green Lantern of the DC-verse in minor roles, but sadly Conroy does not play the Flashpoint-verse Batman, which makes sense in the context of the story being told. I recommend IMDB’ing the rest of the voice talent because there’s lots of fun and familiar casting names filling out smaller DC roles.

The special features are packed, as is usually the case with DC Entertainment releases, and include a fascinating piece about the possibility of time travel and what it would be like if The Flash actually existed called A Flash in Time. You’ll also find a feature on The Flash’s rogue gallery that will catch you up on his obscure villains, an audio commentary with Geoff Johns and director Jay Olivas and four classic cartoon episodes from the DC Vault. Oh, and your first look at the next release Justice League: War (fans should keep a sharp eye on The Flash’s suit at the end as well as stick around during the credits).

Justice League: The Flashpoint Paradox is the biggest risk and most out-there film from DC Entertainment and luckily it almost all works. The story manages to have a sweet and sincere core but surrounds it with sinister moments, unleashing all kinds of horrors on its characters showing the darker and unexpected sides of beloved Justice League characters. Filled with Easter eggs for fanboys and pure carnage for the non-comic initiated, Warner Bros. Animation has another great addition to their excellent growing DC catalog.