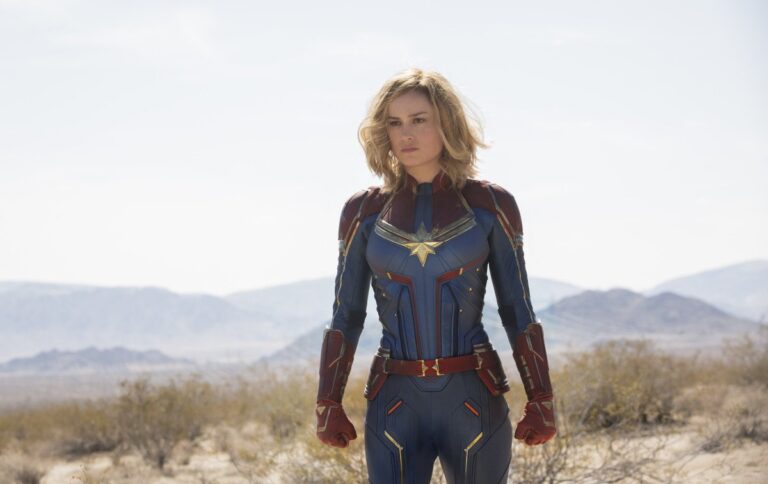 Despite a whopping twenty films under its banner, the Marvel Cinematic Universe is a bit late to the party when it comes to showcasing their female superheroes. Sure, Black Widow has been part of The Avengers since the early days of the MCU, but it’s taken eleven years for the studio to release a solo adventure headlined by a heroine. That moment has finally arrived, with Brie Larson as Captain Marvel.

Awakening on a strange planet with no memory of her past, Larson’s character is adopted by a race of alien warriors known as the Kree, given the name Vers (pronounced veers) and trained by a stern commanding officer named Yon-Rogg (Jude Law). Quickly rising through the ranks in spite of her flippant attitude and impulsiveness, Vers is plagued by a recurring nightmare that finds her on a beach, surrounded by flaming wreckage and watching in horror as a mysterious woman is gunned down.

When a routine extraction mission goes south, Vers is captured by the Skrulls, an insidious species of shapeshifters led by General Talos (Ben Mendelsohn). The Skrulls believe that buried somewhere in her subconscious is the secret to a coveted new technology, but as their interrogation techniques unearth flashes of her former life — not to mention the identity of the woman in her visions — Vers escapes from her captors and crash-lands on Earth, circa mid-90s.

Of course, when a woman clad in a green bodysuit plummets from the sky and through the roof of a Blockbuster Video, the government tends to take notice. Enter Nick Fury (Samuel L. Jackson), intrigued by this newcomer but skeptical of her explanation about shapeshifting aliens — that is, until one of those aliens nearly obliterates Fury and his team with a single blast from a plasma rifle. Against his better judgment and in direct violation of protocol, Fury agrees to help Vers piece together her memories, even as Talos as his minions pursue them across the country.

Directed by Anna Boden and Ryan Fleck, Captain Marvel leans heavily into 90s nostalgia, often going to great lengths to remind you of the era in which the story takes place. When Vers first arrives on Earth, she’s startled by a cardboard cutout of Arnold Schwarzengger and Jamie Lee Curtis from True Lies, a nearby record store window is plastered with advertisements for the Smashing Pumpkins record Mellon Collie and the Infinite Sadness, and when Vers ditches her otherworldly garb for something less conspicuous, she chooses a Nine Inch Nails t-shirt.

The 90s-inspired soundtrack features the likes of No Doubt, Hole, Nirvana, and more, and although the film tries to follow the example set by Guardians of the Galaxy, using carefully chosen music selections to augment the storytelling, this doesn’t always work — in fact, some of the needle drops are downright obnoxious. On the other hand, there are a handful of clever sight gags and smart riffs on the technology of the era — like dial-up internet connections, archaic online search engines and clunky CD-ROM drives — that will certainly elicit chuckles from older viewers. 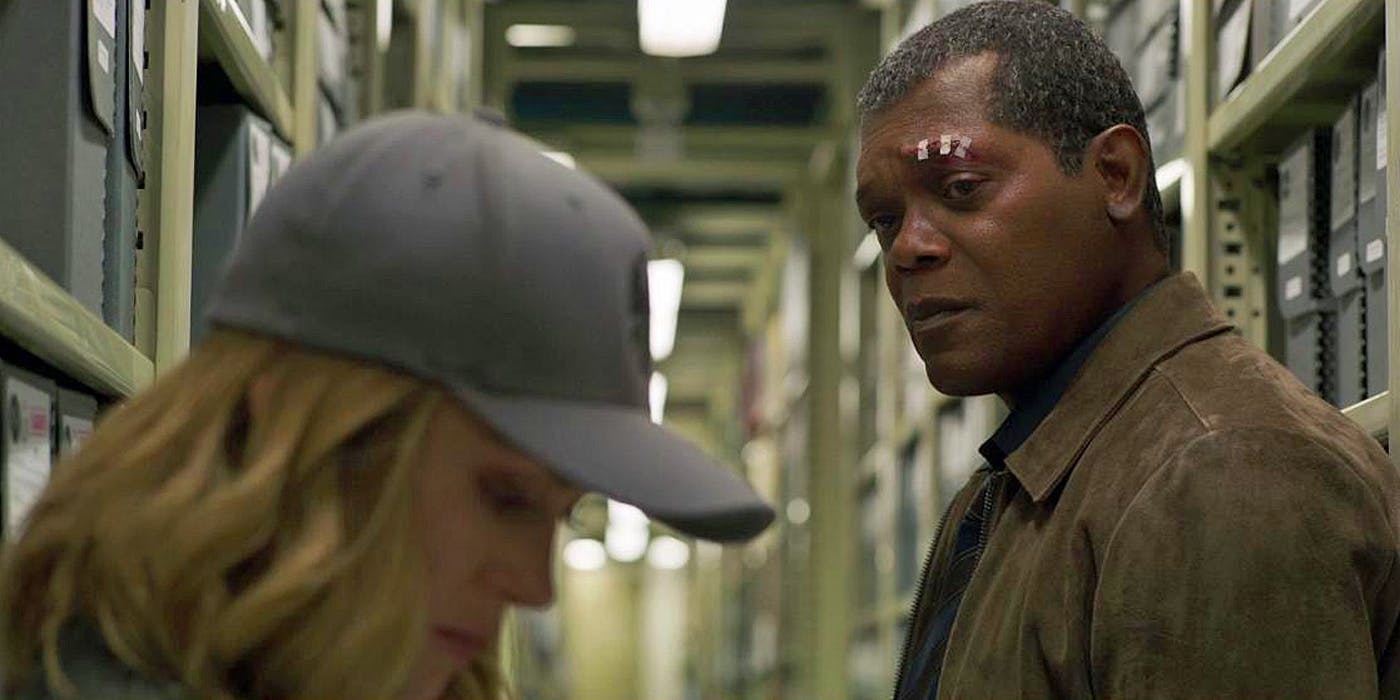 Fans looking forward to a tie-in with next month’s Avengers: Endgame won’t be disappointed, as Captain Marvel has numerous connections to the existing films of the MCU — so many, in fact, they almost feel like a crutch. Pairing Vers with Fury makes sense, given the distress signal sent during the final moments of Avengers: Infinity War, but adding a younger Agent Coulson (Clark Cregg) into the mix feels like pandering, especially considering his limited screen time and mostly inconsequential contribution to the narrative. The same can be said for other ancillary characters that have appeared elsewhere in the MCU: their inclusion here serves little purpose other than to give viewers a chance to say “hey, it’s that guy!”

Captain Marvel also ranks among the more humorous entries in the Marvel catalog, thanks in no small part to the wonderful comedic chemistry between Larson and Jackson. The bulk of the film plays like an intergalactic buddy cop movie, with Larson as the wisecracking rookie and Jackson the seasoned, straight-laced veteran. Both performers seem perfectly suited to these archetypes, and the smaller dialogue-driven moments often outshine the major action setpieces.

The film also gives Jackson the opportunity — aided by spectacular de-aging technology — to portray a very different version of Fury than we’ve seen before. Long before the shaved head, the black leather trenchcoat and the signature eye patch, the younger Fury is devoid of the cold cynicism and matter-of-fact disposition that have become a trademark of the character. Instead, he’s optimistic, warm-hearted and even a little goofy, as evidenced by a scene where he sings The Marvelettes’ classic “Please Mr. Postman” into a dish wand.

But lest there be any confusion, Captain Marvel belongs to Brie Larson, whose enthusiasm for the role can barely be contained. One can argue that Larson has already played a superhero of sorts in 2016’s Room, for which she took home an Oscar, but that sort of real-world heroism is on a different plane than the fisticuffs and photos blasts of the MCU. Luckily, she’s more than up to the task, and when she pumps her fist triumphantly after taking out a roomful of baddies or smirks at a soliloquizing villain whose ass she’s about to kick, we can’t help but wonder how much of that zeal is just Larson herself, relishing the moment.

Never straying far from the origin story blueprint, Captain Marvel nevertheless manages to forge an identity for itself and its titular character. Perhaps even more important, it gives young ladies another strong role model to look up, a confident and capable woman who rails against the patriarchy and the cries of “you don’t belong here” and emerges triumphant. There’s a brilliant moment where an adversary demands that Vers prove her mettle by facing him without the use of her powers. Her response could just as easily be levied against the online trolls who’ve launched a campaign to sabotage the film’s reputation even before its release: “I don’t have to prove anything to you.”