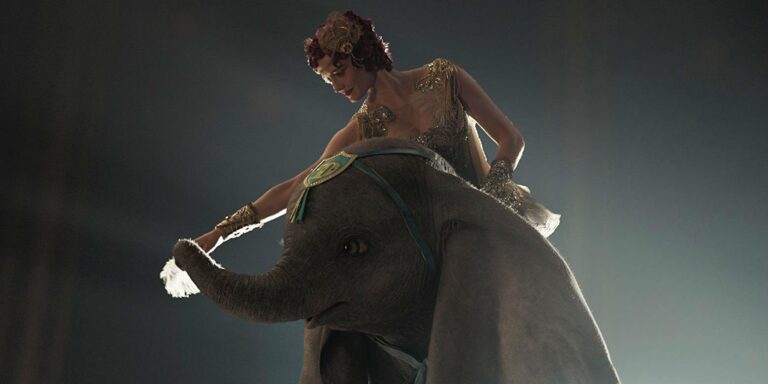 Over the past few years, Walt Disney Studios has taken a number of characters and stories from their animated classics and updated them for modern audiences in the form of live-action features. It’s a strategy that has been wildly successful, with Beauty and the Beast grossing well over $1 billion worldwide and even the lowest performer, Cinderella, raking in a respectable $543 million. This weekend’s Dumbo, directed by Tim Burton, should have no trouble topping the box office, despite being the most ill-conceived and disappointing adaptation yet.

At a scant 64 minutes, the original 1941 animated film hardly contained enough material to justify revisiting, so Burton and screenwriter Ehren Kruger opt for another approach altogether, weaving in familiar elements as they spin a new tale. In this version, former circus performer Holt Farrier (Colin Farrell) has just returned from the war and looks forward to getting back in the ring as the main attraction of the Medici Brothers Circus. But owner Max Medici (Danny DeVito), having sold the Farrier family’s horses to pay debts, has a new position in mind: elephant wrangler.

Holt’s children, scientific-minded Milly (Nico Parker) and kind-hearted Joe (Finley Hobbins), are far more enamored with the assignment than their father, particularly when the newly acquired Mrs. Jumbo gives birth to an adorable baby elephant with prodigious ears. Medici is horrifed at first, demanding that Holt come up with a solution — “make those ears disappear” — before allowing the peculiar pachyderm under the big top. But when Milly and Joe teach Dumbo (whose nickname is earned in absurdly ham-fisted fashion) to flap his ears and soar above the crowd, it turns the Medici Brothers Circus into an overnight sensation, capturing the attention of millionaire theme park owner V.A. Vandevere (Michael Keaton).

Vandevere is the proprietor of Dreamland, a sprawling entertainment destination cast in garish art deco style where he hopes to turn Dumbo into the main attraction, teaming him up with high-flying trapeze artist Colette Marchant (Eva Green). Burton’s films always tend to exist in a heightened reality, but Keaton is on another planet altogether, delivering nearly every line of dialogue with a different accent or inflection and making the character seem more schizophrenic than sinister (although there’s plenty of the latter at play, too). One can’t help but wonder what sort of direction Keaton was given before cameras began rolling, and if he chose to just ignore that direction completely, or if this was exactly the sort of performance Burton had in mind.

As for Dumbo himself, he receives remarkably little screen time for a film bearing his name. Even when he does appear, Dumbo spends a large portion of the film either terrified or depressed — we’re hardly given an opportunity to appreciate his cuteness before we’re witnessing another disturbing event being visited upon the poor little guy. The number of frightening images and sequences on display here — including repeated instances of animal cruelty — is alarming, and if Burton’s intent here was to elicit sympathy, he’s severely overplaying his hand.

Speaking of Burton, there are a number of choices, both stylistic and narrative, that seem ill-fitted for what should ostensibly be a film for the entire family. While his previous work for Disney (Alice in Wonderland, Frankenweenie) included some of the macabre elements that have long been his trademark, Dumbo repeatedly veers into territory that could easily become traumatizing for younger viewers. The overall dark and dingy aesthetic adds a layer of bleakness the film can never quite escape, even at moments when it tries to be uplifting. The titular elephant may soar through the skies, but Burton’s film never manages to take off.