TV Review: ‘The Falcon and the Winter Soldier’ 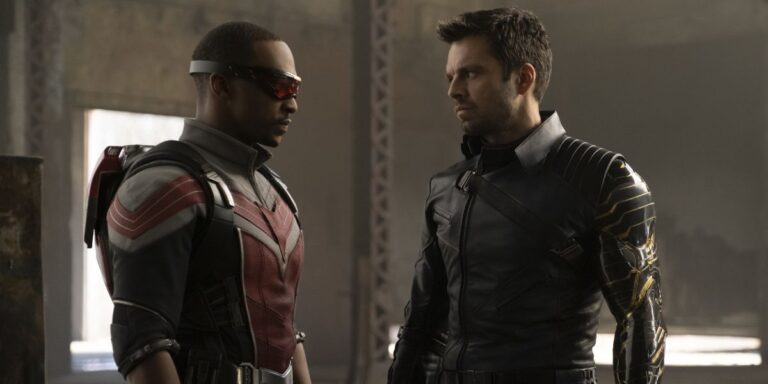 Originally planned as Marvel’s first television offering before the COVID-19 pandemic derailed the production schedule, The Falcon and the Winter Soldier arrives fresh on the heels of the critically acclaimed WandaVision. After the bold stylistic choices and stirring emotional arc of its previous series, Marvel finds itself with some mighty big shoes to fill, and the further adventures of Sam Wilson (Anthony Mackie) and Bucky Barnes (Sebastian Stan) are off to a shaky start.

The show opens with Sam contemplating his final conversation with Steve Rogers, where the elderly Captain America passed the iconic shield to his longtime friend and protégé. Rather than take up the mantle of his mentor, Sam elects instead to donate the shield to the Smithsonian as part of a retrospective on the First Avenger’s life and legacy. But first, we’re treated to an exhilarating action sequence in the skies above Tunisia, where Sam utilizes every trick in his arsenal to rescue a military liaison kidnapped by an extremist group. It’s big, bombastic stuff, the kind of sequence you would expect from a big-screen Marvel adventure, and proves the studio wasn’t kidding when they said their Disney+ spinoffs would share the same production values as their theatrical releases.

Elsewhere, Bucky is plagued by PTSD, reliving the horrific deeds he committed during his decades as a Hydra assassin. A government-mandated therapist urges him to open up about the nightmares, to cope with the demons of his past and try to move forward, but the torment never stops. He frequents a sushi restaurant with an elderly Asian gentlemen and tries to make it through a date with an attractive bartender, but every conversation, every interaction, every decision always seems to lead back to his shadowy past.

While Bucky tries to find peace in a world he scarcely understands, Sam returns home to Louisiana, reuniting with his sister Sarah (Adepero Oduye), who struggles to keep the family business afloat (literally). Sam’s advice and offers of assistance are met with resistance: there’s clearly a rift here that hasn’t fully healed, but the first episode merely scratches the surface of their relationship, leaving us with more questions than answers.

In fact, that’s a fairly apt description of the first episode — the only one that Disney provided in advance of the series premiere. By the time the credits roll, Sam and Bucky haven’t shared a single moment of screentime, so even though The Falcon and the Winter Soldier has been marketed on its buddy cop formula, we haven’t yet been given an opportunity to judge whether that formula is successful. Where is Sharon Carter (Emily VanCamp)? Where is Zemo (Daniel Brühl)? How long do we have to wait for Sam and Bucky to team up and kick some ass?

For now, The Falcon and the Winter Soldier offers little beyond an enjoyable slice of airborne action, and a hefty amount of table-setting for the future. Mackie and Stan have showcased strong chemistry in previous Marvel outings, but only in fleeting moments — whether or not their onscreen dynamic will be enough to carry the series forward remains a giant question mark hanging over this project.