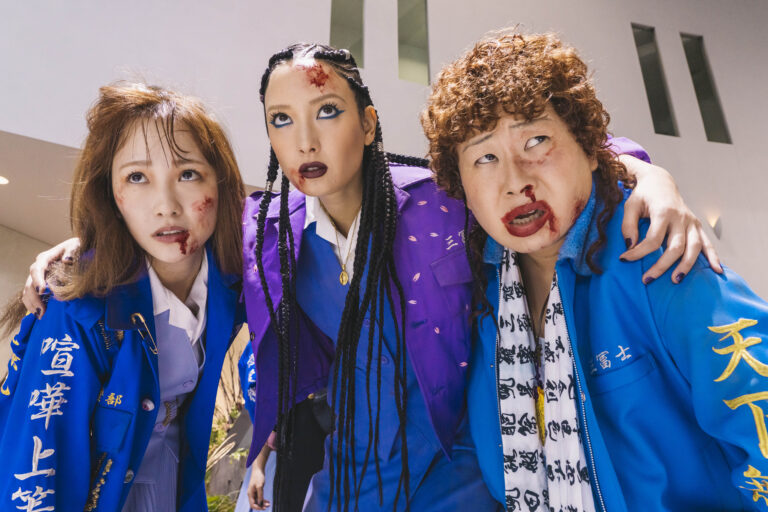 A wickedly funny but wildly uneven riff on office politics, Kazuaki Seki’s Office Royale — enjoying its Canadian premiere at the 2021 Fantasia International Film Festival — is predicated on the amusing premise that female clerical workers in a nondescript Tokyo tech firm have separated into violent factions vying for supremacy. The sales team is led by the fierce Shiori “Mad Dog” Satake (Rina Kawaei), archnemesis of Shuri “The Demon” Ando (Nanao), who heads up Research and Development. Both women are eager to take advantage of the power vacuum left by Manufacturing matriarch Etsuko “The Beast” Kanda (Miyuki Ohshima), recently tossed in jail for nearly beating a rival to death.

We’re introduced to each leader and their respective pastel-clad followers by Naoko Tanaka (Mei Nagano), a newly employed member of the firm who looks on in awe as these women hurl each other into lockers or engage in bloody brawls on the rooftop recreational area. The nigh-superhuman abilities of these office warriors and the constantly shifting balance of power reminds Naoko of her favorite comic books, complete with the occasional plot twist: after witnessing the enigmatic Ran Hojo (Alice Hirose) rescue a helpless passerby from being tormented by Satake’s faction, Naoko is shocked when Ran becomes the firm’s newest employee, putting her on a collision course with its three toughest competitors — not to mention the top fighters from other nearby companies.

Production design proves to be the biggest strength of Office Royale, with the brightly colored uniforms of each group creating a stark contrast with the drab, washed-out colors of the cubicle-laden workspace, and images of bloody, bruised and bandaged office personnel going about their duties of filing and copying will no doubt remind viewers of Fight Club. The film also boasts a wicked sense of humor, particularly after the introduction of the hilariously aloof Ran Hojo, and there are numerous dialogue exchanges guaranteed to elicit some chuckles. Alas, what should be the major attraction — the anime-inspired fights themselves — are often marred by rudimentary choreography and sub-par special effects, leaving them less engaging and exciting than they should be, especially for a film that seeks to make its action beats a cornerstone. Office Royale is still a fun ride, but doesn’t quite deliver on the promise of its initial setup.

Office Royale screened at the 2021 Fantasia Film Festival. Find more of our Fantasia coverage at this link.