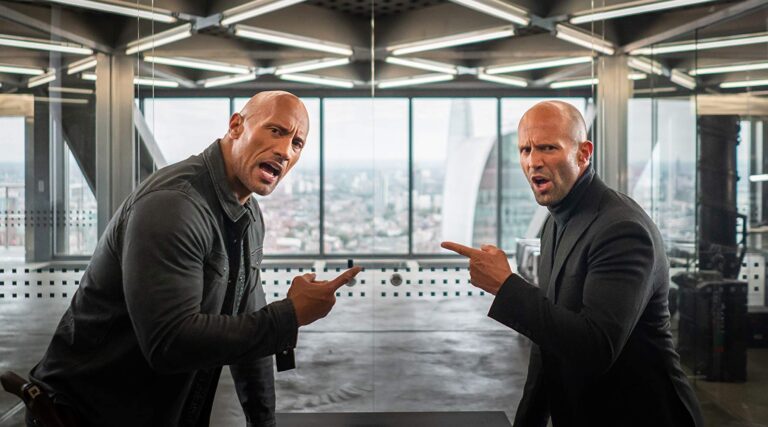 The Fast and Furious franchise has always enjoyed a somewhat tenuous relationship with the laws of physics, and that relationship has grown more strained with each successive installment. Hobbs and Shaw, the first attempt to spin characters from the primary series off into their own adventure, takes things a step further, casting off the chains of reality altogether to deliver one of the most preposterous, ridiculous, and downright enjoyable action films in recent memory.

The film opens with a group of MI6 agents attempting to recover the Snowflake virus, a genetically engineered bioweapon with the ability to “liquefy your insides.” When a cybernetically enhanced rogue operative name Brixton (Idris Elba) shows up and decimates the entire team, Hattie (Vanessa Kirby) injects the virus into her own body and goes on the run, only to discover that she’s been framed for the murder of her colleagues and designated a global threat.

A joint operation between multiple international law enforcement agencies reunites Luke Hobbs (Dwayne Johnson) with Deckard Shaw (Jason Statham), but after the events of Fate of the Furious, neither is especially thrilled about the notion of teaming up. Egos flare, masculinity is called into question, and the duo come to blows almost immediately. “Every time you speak, it’s like dragging my balls across shattered glass,” Hobbs says. “It hurts.” But when Brixton conducts a daring raid of a CIA blacksite and makes off with Hattie, Hobbs and Shaw are forced to set aside their differences to get her (and the virus) back.

Elba’s Brixton may refer to himself as “black Superman,” but his cybernetic implants — giving him increased power and agility, along with a diagnostics overlay that displays incoming threats, building schematics, and whatever else the plot deems necessary — actually render him closer to the Terminator, or Iron Man (the film even employs the “Tony Stark cam” from inside Elba’s helmet on more than one occasion). Previous Fast and Furious entries have offered their share of implausibilities, but the very idea of Brixton and his team — with “delusions of saving the world by augmenting the human race” — pushes Hobbs and Shaw well into science fiction territory. It’s a dicey proposition that could have fallen flat, but the cast does an admirable job of selling the sheer ridiculousness of it all.

After showcasing his action sensibilities on Deadpool 2 and Atomic Blonde, director David Leitch brings that same level of inventiveness to Hobbs and Shaw, constructing a series of insane setpieces that refuse to be bound by the limitations of the real world. Motorcycles zip along walls and change configuration like Transformers, while bodies crash into city buses and walk away with nary a scratch. The climactic third act, which finds Johnson paying homage to his Samoan heritage by staging a massive battle on the island, is not only one of the most original ideas we’ve seen, but also boasts a chase sequence — featuring a helicopter, a tow truck, and a group of souped-up hot rods — that’s absolutely bonkers.

Hobbs and Shaw is anchored by excellent comedic chemistry between Johnson and Statham, building on their dynamic from the previous film and ensuring laughs are in ample supply. Many of the jokes are low-hanging fruit, with Hobbs frequently poking fun at Shaw’s diminutive size, Shaw pointing out the inherent absurdity of someone with Hobbs’ hulking frame trying to remain incognito, and both men frequently bragging about the size of their genitalia or hypothesizing about their rival’s perceived lack of endowment. It’s juvenile, to be sure, but Johnson and Statham make it work. That being said, some of the film’s biggest laughs come courtesy of two scene-stealing cameos that we won’t spoil here.

The steady barrage of punches, kicks, gunshots and explosions is likely to leave audiences exhausted by the end of the film’s two-plus hours, but Johnson and Statham are both so innately watchable that we don’t really mind. Hobbs and Shaw is so irrational and illogical that it’s basically a cartoon, a machismo-laden thrill ride that borders on parody and is, at times, unspeakably dumb, but in the best possible way. And rest assured, this won’t be the last we see of this unlikely team: a mid-credits sequence lays the groundwork for a sequel, which will almost certainly be greenlit in the coming weeks. We may not be seeing Johnson and Statham in the main Fast and Furious lineup anytime soon, but if Hobbs and Shaw is any indication, this duo is just getting started.