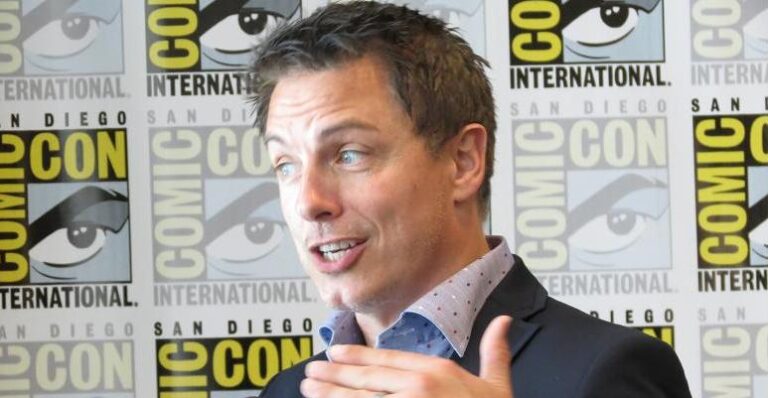 John Barrowman has a history a playing characters that defy death at every turn. From the immortal hero Captain Jack Harkness on Torchwood and Doctor Who to the villainous (and allegedly) Lazarus Pit-infused Malcolm Merlyn on Arrow, his characters just can’t be stopped.

In real life, Barrowman is also a man who can’t be stopped, and his tireless devotion to his fans and non-stop infectious energy has made him a beloved figure in the nerd community. Warner Bros. TV created a lot of highlights at Comic-Con 2014 and provided one of my personal favorites when they generously gave me time with the cast of Arrow, including the incredibly gracious John Barrowman, where he teased the upcoming third season of the DC superhero show. You can check out the highlights below, and keep bringing your browser back to NerdRep.com for more Comic-Con interviews with the cast:

On whether Malcolm Merlyn is looking for redemption in Season 3:

To jump back a little bit: The thing that Malcolm is good at – because he’s misunderstood, I don’t see him as a bad guy, right? – Malcolm can control and manipulate with his money. He can manipulate with his violence. He can manipulate and control with his destructive techniques. How he lost Tommy through emotion. Tommy became a hero because he loved somebody and wanted to save her. [Malcolm] lost Moira (Susanna Thompson), who he loved, for emotion. She sacrificed herself for [points to Stephen Amell at another table], right? He does not want to lose Thea.

So what does he have to do? He has to find a way to control people emotionally. So that, for me, is how I think it’s going to end this time… without giving you too much… [laughs] but I don’t think he wants redemption.”

On Malcolm’s motives and relationship with Thea in Season 3:

Malcolm comes from a place, we all know he’s been to Nanda Parbat – we all know what history that has [home of the League of Assassins/Ra’s Al Ghul], we all know where Malcolm, shall we say, trained – had qualities… that’s why he was able to mimic dying. Everybody says he doesn’t look [old] enough to have Tommy, but where he was has rejuvenating qualities.

If you know your history of DC, as I do because I’m a huge nerd… so take all of that on-board on what he might have to do. But I’m telling you honestly, some of it I don’t know. This is John Barrowman, fan talking, and maybe that’s going to be brought in, I hope, with Thea and maybe something across to Ollie.

[Editor’s Note: later that evening, it was confirmed that Ra’s al Ghul would appear in Season 3]

On if Malcolm’s story this season will have flashbacks:

“I don’t know. We will pick up with Malcolm and Thea where we left off. So her getting into the back of the limo, looking exceptionally hot – it’s kind of creepy to say that about my daughter – in the black leather coat and the boots, that conversation is going to happen.

We haven’t shot any of that yet, so I’m really looking forward to it. I just came back from the UK. I flew in two days ago. Then I drove to my house in Palm Springs. Unpacked my stuff. Packed again. Came here. I have all the scripts I have yet to read.

So I’m kind of going in, I know what they’ve told me, but I’m really excited to read them myself and start filming because I’ve been chomping at the bit. I’ve done the Commonwealth Games in the UK, I’ve launched my album, I’ve been in Australia doing promotional stuff for the last month and half. So I am ready to get my teeth into Arrow.”

On his love of the character of Malcolm Merlyn:

“Here is my vision for what I would love to do. If you don’t know, my sister and I write together. We’ve done a couple of comic books and we also have done a Torchwood novel and we write a children’s/mid-teen series called Hollow Earth. Which we’ll now be doing the third book, which comes out in the States next year and then we’re starting with four more.

I would love, this is my dream for this year and I’m going to talk to DC about it, I would love for Carol, my sister, and I to do a Merlyn comic. I met [Geoff Johns] last night for the first time and I thought ‘I’m not going to use this opportunity now, but I will go in and meet with them.’ Because I’ve talked to [Arrow executive producer] Andrew Kreisberg about it and he thinks it’s a great idea. Because it would… I know Malcolm.

I went back to the guy who originally drew the first Malcolm Merlyn. I can’t remember his name now, I was at a convention, I went and sat down with him and he was drawing and I said ‘Look, can you take my face, my physique, my imagery…’ and he drew what I described to him and I’m going to show it to Andrew and them because it looks phenomenal. It looks amazing.

That’s why I’m trying to get a little bit of stubble because I really like the goatee. Bring back the retro-modern feel to it. We learned this with Doctor Who, you want to do stuff for the future you have to go back to the past and you revamp it. You kind of take stuff from the past to make them look futuristic.

I just had a geek moment, which is awesome! He not only just did a facial drawing, but he did a full body drawing of me, which is totally amazing, in a tight outfit – a leather, kind of darker version. I just lost it, because that one I wear right now is so freaking claustrophobic. As they say in Glasgow, Scotland ‘I’ve got a big head.’

Yeah it’s claustrophobic, they stitch me into that mask. So when I’m in, I’m in and when I do my dialogue, I’m the one who gets all the speeches. So I get all these speeches [puts hands over mouth and makes garbled noises] so I have to go in and dub them! [makes more noises] It’s like a gimp mask! So we’re going to have to work on that.”

On what his fans mean to him:

“I’ve always said this, and this is not [a euphemism], I’m really upfront with my fans. I treat my fans probably very differently than a lot other… well, I am a celeb, right? A talent, you know what I mean? But I appreciate my fans, I adore my fans, my fans have changed my life.

For us to have this, you’re saying like a Comic-Con, that’s why I do them. That’s why I go to more conventions more than a lot of other actors because I love the interaction with my fans. It’s great when somebody comes up – this might sound weird to you guys – and says ‘watching you changed my life because I was ill and I watched the box set and I really focused on what you were saying as Captain Jack [on Doctor Who/Torchwood]’ or something like me singing ‘Springtime for Hitler’ – they’d play it over and over again because it made them laugh.

So to have that, to meet them, and you’re making that impact is really important to me. And if I’ve changed, I’ve told my fans they have to slap me. So the day you see someone walking up to me in the street and slapping me, you’ll know something has gone really wrong.”

Speaking of his fans, John Barrowman was the last to leave the press room after all the interviews had wrapped up, and took the time so snap a few photos, including one with this very fan himself, yours truly:

Arrow will premiere its third season on Wednesday, October 8, exclusively on The CW.