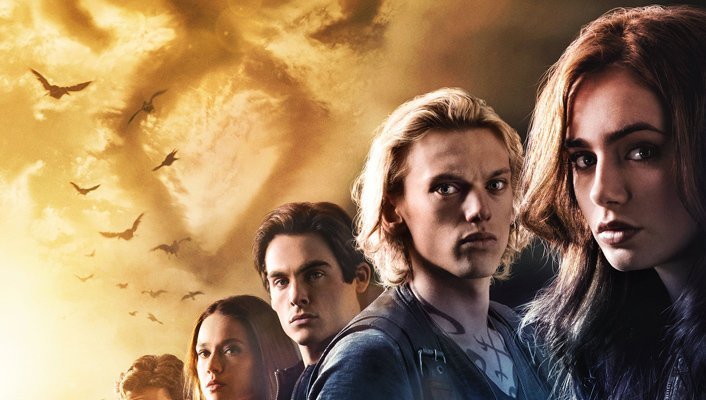 Clarissa “Clary” Fray (Lily Collins) has been living quietly in Brooklyn for as long as she can remember, when she suddenly begins to see startling and seemingly impossible things. Just as suddenly, her single mom (Lena Headey) disappears after a violent struggle. As she and her best friend Simon (Robert Sheehan) search for her mother, Clary begins to uncover the dark secrets and darker threats in the hidden world of the Shadowhunters, angel-human warriors who have protected humanity from evil forces for centuries.

Surrounded by demons, warlocks, vampires, werewolves and other supernatural denizens of the Shadow World, Clary joins forces with young Shadowhunters Jace (Jamie Campbell Bower), Isabelle (Jemima West) and Alec (Kevin Zegers) to locate and protect an ancient Cup that holds the key to her mother’s future. Discovering abilities and courage she never knew she possessed, the young woman surprises even herself as she proves to be a formidable opponent against an array of deadly adversaries.

During a recent press tour, we had an opportunity to chat with stars Lily Collins, Kevin Zegers and Jamie Campbell-Bower about the pressure of playing such beloved characters, and what to expect from this film, as well as future installments in the series.

I’m not familiar with the books, so can you tell me what it is that really sold you on this story and made you want to get involved?

Kevin Zegers: I think people’s instinct is to try to group this film in with other books that have been made into films, especially sort of young adult things. And to be honest, that was my idea when I was reading it. I was sort of thinking it’s probably going to be just another one of those kind of things and there probably won’t be a lot to do in terms of character stuff. And I found myself really surprised at how character-driven this movie is. The emphasis on the supernatural stuff, it’s certainly in there, but it’s definitely not a movie relying on werewolves and vampires and stuff like that.

This is a story about a girl in search for her mother and sort of finding out who she is, and so I think any pre-conceived notion you would have, having not heard of the books or not read the books, this is just a good film. It’s certainly the reason why I wanted to get involved, because I liked the character and the script was great.

Jamie Campbell-Bower: Yeah, the characters are all there. There’s no sort of empty calories, let’s say, when it comes to characters. For me, what I was excited about was I guess throughout recent history we’ve seen the male superhero or the male, I don’t know, love interest be this big beefcake jockey kind of… a bit untouchable, a bit like Kevin…  I was really excited to be able to try and redefine that and make him into a bit of a wily rock star.

Lily Collins: Yeah, and for me, I was a fan of the books before I was cast and what I loved so much about it is that for the first time, I really felt like a reality and a fantasy world were married together in such a great way that the second you think we’re taking ourselves too seriously in this magical fantasy world, we have a moment of humor and realness that brings it back down to earth.

And I mean, yeah, sure, there’s romance, but it doesn’t define Clary’s story. There’s drama, there’s action – the action is some of the best action I’ve seen in a film in a long time, let alone a teen franchise. And I think there’s something for absolutely everyone in this story that you’ll walk away just feeling like you’ve seen a good film. It doesn’t matter that it’s maybe geared more towards teenagers. I think it goes way beyond that.

Obviously, coming into this project this is a series that is extremely well beloved by a number of people. What kind of pressure do you feel when portraying a character that so many people have already envisioned in their minds?

Lily Collins: Well, I think coming into this situation, I was a fan of the books before I was cast because of any actress who would have played Clary, I would have definitely had expectations and my own idea of who and how Clary should be played. I just think there comes a certain point at which I had to separate myself as an actor and realize that I’m going to put little bits of myself in there and really pay honor to the way that Cassandra wrote Clary, but also take on a life of its own by making her a little bit more Lily.

So, I tried not to think about all the pressures of playing Clary when I was playing her, because I think that would only really distract me. I think once we got on set, none of us were really thinking about what expectations were put on us, other than the ones we were putting on ourselves.

Jamie Campbell-Bower: Yeah, obviously, there’s preconceived notions of who these characters are. The fact of the matter is we’re not going to be able to please everybody. But here’s the thing – we were cast in the movie. In that sense, somebody had to see something in us that stuck out that they believed in. So, with that we take elements of ourselves, like Lily just said, and we also take the bible that casting has given us, the books, and you work out who you want these people to be in just over two hours worth of footage.

Lily, you previously starred in Mirror Mirror, and Jamie, you were in the Twilight saga and in the Camelot television series. Would you say that the fantasy genre is something that appeals to both of you?

Jamie Campbell-Bower: I’m English, so I suppose I’m always cast either as the weirdo or as someone who has a little bit of something wrong with them. That’s how my career has gone.

Let’s be honest here, let’s be open – you look at the movie industry. The movie industry is an industry at the moment which is in a little bit of trouble. Studios need to make movies that they know people will go and see, so an adaptation of a book that has sold over 22 million copies is a bankable bet, put it that way.

I’m just thankful and happy and proud that we made it so good because there have been adaptations that haven’t been anywhere near as good as this. So, when it comes to fantasy I just suppose everyone likes to be taken away from the mundane elements of life.

Lily Collins: I personally have always loved fantasy. That’s why, for me, playing Snow White was such a big deal, and I grew up loving Harry Potter and anything magical. But for me, this series was the one that popped out from those, and I’m thankful that I got to be involved in it. But the idea that it is edgier and darker and a bit sexier and is quite funny are elements that I didn’t really find in the other ones.

But I definitely love to escape reality for a little while and if I get to be a part of that, and then taking other people with me in that kind of journey, then that’s awesome to say that’s my job.

I was sitting in Hall H during your panel at Comic Con – what did it feel like to be on that stage in front of that audience and get that kind of ovation?

Kevin Zegers: It’s all a bit surreal. We were all sort of cast to shoot a film, which is something we all love to do, and you go about making the film and you shoot it and you do your best and you create a character and then you finish and then this whole, that Comic Con thing included, is a completely separate side of things. It’s a little overwhelming.

Certainly for me, it’s something I’ve never experienced before, so seeing a billboard that’s the whole length of the side of a building with your face on it and 6,000 people in a hall watching exclusive…  it’s all a bit strange. It feels like something that if I were involved in watching I would go, oh, how cool would that be, except you’re sort of a part of it, so it’s a strange dichotomy of being involved in something, being proud of it, but also feeling slightly detached in the machine that is sort of putting it out there.

So, we’re just trying to have fun. You can’t take it all too seriously. It’s sort of great and we’re excited that people are excited about the movie, but it sort of becomes a machine in and of itself. The film kind of sells itself and I think even when the film comes out, certainly the three of us have seen it and you saw some footage and stuff, but the movie would really kind of sell itself. It’s a good movie and I think we’re just excited to kind of be part of it. Not to speak for all of us, but I just did.

Jamie Campbell-Bower: One has to detach oneself from it at that point. I think we’re all smart enough and we’re all mature enough to know that this may not last forever. The industry that we’re involved in is incredibly fickle. So, we take pride in every single thing that we do and we’re also very objective about it.

It’s amazing to sit in a room like Hall H and get to show something that a lot of people are excited about, and to show parts of the movie and to talk to people about it because I think we’re all very aware of the fact that without those fans, we would not be in the position we are. We would not be going around the world and getting to go back and shoot another movie. So, in that sense we’re incredibly grateful, but it’s also a little bit silly. Sometimes you have to be able to laugh at yourself and go, “this is mental.”

Lily Collins: I’ve been attached to this project for about three years now, so it’s been something I’ve believed in from the moment I read it and I’ve felt passion about it and I think every single step of the way during this process has ignited my passion more and more. And to finally have it come to fruition and to go to a place like Comic Con and share footage with people and have them be as excited as I was the first day I read the script is just the best feeling.

I’m just so proud of all of us and the work that we’ve done and I can’t wait for more people to see it. And it excites me to, hopefully, go back next year with the sequel and just continue the excitement, because I know that I get more and more excited as we get closer to opening.