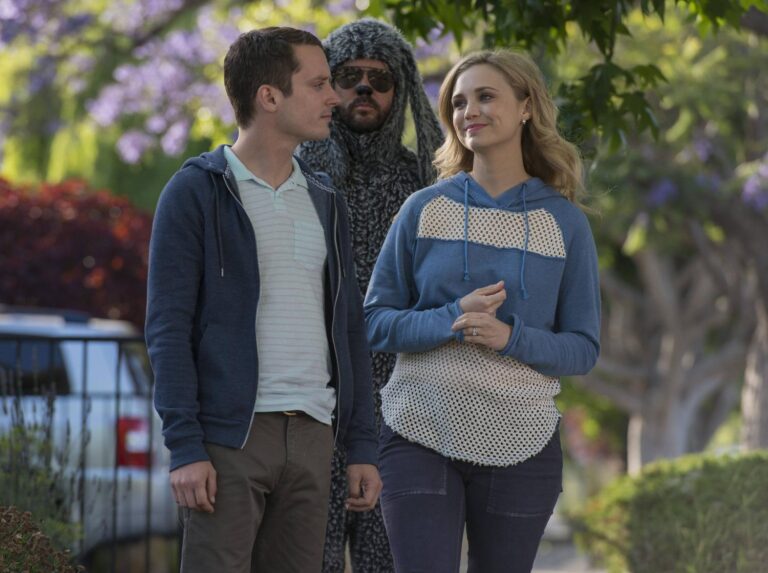 Wilfred’s third season is coming to a close with only two episodes remaining, so naturally there’s some big stuff ahead, starting with this week’s episode entitled Heroism, which will certainly get fans talking after it airs. I had a chance to catch up again with Fiona Gubelmann (read my earlier interview here) in anticipation of the new episode, this time accompanied by her on-screen husband Drew, American Pie’s Chris Klein. Here are some of the highlights:

This week’s episode, Heroism, is a lot of fun and possibly a turning point for some of the characters. Without going too much into spoiler territory, do you guys think viewers will look back on this episode as a pivotal one for the season?

Fiona: Yes. I think not only a pivotal one for the season, but a pivotal one for the series. I think that the last two episodes of the season change everything for everybody. I think the world, as we know it, is just never going to be the same in terms of the relationships for the characters, between Jenna and Ryan, Jenna and Drew, even Wilfred and Ryan. Everything is about to change. I think it’s really exciting.

Chris: Fiona said it best. I’ll leave it there.

Chris: This group of fans, this group of Wilfred fans are really, really, really cool. They’re way cooler than I am, and in a lot of ways a heck of a lot smarter than me, too. I’m always so grateful to be a part of this show and play the part that I do, because fans of the show respond to it and they think it’s funny.

[pullquote_left]Chris: [The fans] are way cooler than I am, and in a lot of ways a heck of a lot smarter than me, too.[/pullquote_left]

But what I get the most from people who appreciate the show is they always ask me what is going on over there? What in the world is going on, I can’t take my eyes away from this? That’s really a testament to the writers and the creators and a lot of what Elijah Wood and Jason Gann and the director, Randall Einhorn, bring to the show. [It] stokes me out pretty good.

Chris, do you think Drew purposely puts Ryan in these uncomfortable situations to mess with him, or is it just as a means to an end to get what he wants?

Chris: Oh, man, I really think to give Drew that much credit would be a gross overestimation of his manipulation skills. Drew is in love with Jenna, and he’s doing his thing. He’s the next door neighbor. Though we find him as an antagonist in this show every once and a while, I really believe, too, in terms of being self calculating, I think you’ll find that much more next door with Wilfred and Ryan.

Fiona: I agree with that.

What can you guys tell us that you continue to find challenging about these roles?

Fiona: I think what I continue to find challenging is just the fact that it’s constantly changing. We shoot our show out of order, so sometimes we’ll be getting scripts for the end of the season without having read scripts from earlier in the season. I think that can be a challenge just trying to figure out and track your storyline. Luckily, we have such great writers, and our director, Randall Einhorn, and they’re really great and able to really guide us and help us answer any questions that we might have.

Chris: I really agree with Fiona. Besides the fact that it’s a whole heck of a lot of fun every spring when I have an opportunity to be a part of this show, the writers and the creators and the director, Randall Einhorn, are really very hands-on, incredibly creative people that have a very, very clear, concise vision of what they want this show to be. They really, really do a wonderful job of communicating that to the cast.

Was it instant chemistry when you guys began working together or did it take a bit of time for you all to develop that?

Chris: I fell in love with Fiona immediately.

Fiona: Working with Chris has been an absolute pleasure. He is just such a sweetheart. We’re always cracking each other up and sometimes it’ll be hard because he’s just so much fun to talk to, and then all of sudden we have to do a serious scene. But it’s a blast; I treasure all our scenes together.

On a lot of other shows, a couple like Jenna and Drew would be broken up long ago because they’re so mismatched. Could you speak to the development of this couple that seems to love each other but are wrong for each other?

Fiona: Okay. I don’t think it’s necessarily that Jenna and Drew are so mismatched and so wrong for each other. I think they’ve been together a long time, since their early 20’s, and I think that they love each other very much and they’ve just grown apart. I think they’ve definitely grown apart and are wanting different things in life. But I don’t necessarily think they’re, I hate to say that they’re so mismatched and so wrong for each other. [pullquote_right]Fiona: I think in life, you meet someone, you fall in love, and then as you grow older you want different things.[/pullquote_right]

I think in life, you meet someone, you fall in love, and then as you grow older you want different things. That happens a lot and to many people. It’s hard to be with someone that you have a history with, that you care so much for, and then to have the strength to walk away from that is very difficult.

Chris: I think Fiona’s exactly right. Let’s remember, when we first met Jenna, we learned that she’s from Wisconsin and she’s moved to the big city, and she does the news and she’s into her life. Drew’s still back home and we don’t meet him till later.

There’s no question in my mind that the character of Drew is blindly in love, in a very young, country boy way. And Fiona’s right, with that, people grow and people move on. When they grow at different rates, it becomes very, very difficult for the person who’s kind of taking some steps outside of the box.

One of the most compelling aspects of Wilfred are the life lessons within, so has the show taught you personally any lessons about life?

Fiona: Don’t get stoned with a dog?

[pullquote_left]Chris: To take life lessons from Wilfred or the actor that plays him, Jason Gann, would be a cautionary tale, to say the least.[/pullquote_left]

Chris: To take life lessons from Wilfred or the actor that plays him, Jason Gann, would be a cautionary tale, to say the least.

Fiona: I’m trying to think… I think the one thing that the show has really impressed upon be is just standing up and – I’m trying to think of a way to word this. To me, it’s about taking responsibility for yourself and your actions and what you really want.

With Jenna, I think she doesn’t always do that. I think that’s a flaw that I can relate to and many people can relate to. I like that the show is this exploration of Ryan and what he needs. For me, it’s just been standing up for myself and really vocalizing what I need and what I want and communicating that to people.

Chris: I think that’s really well said. I really appreciate the close of every episode where we get to take a step back and just watch a man hang out with his dog. For me, as somebody who understands that relationship, having a dog myself, being a pet owner, Jason and Elijah [Wood] do a really groovy job of really explaining that relationship. For me, in the show when they’re going through what they’re going through, it makes it easier for me to understand because of those moments on the couch.

Since you have both been involved with the show since Season 1, now Season 3 is almost drawn to a close, what stands out to you about this current crop of episodes?

Chris: In all three seasons, this particular crop of episodes really, really dives into that Wilfred-Ryan-Jenna triangle in such a beautiful way and explains to us as audience members, we get to really see how touched all three of them are. That’s a really, really cool thing, and something that, as a fan of this show, I’ve been waiting to see more of, as well, ever since the first season when we got our first glimpse of it.