REVIEW – ‘Ain’t Them Bodies Saints’ is a haunting, beautiful fragment of a completed work. 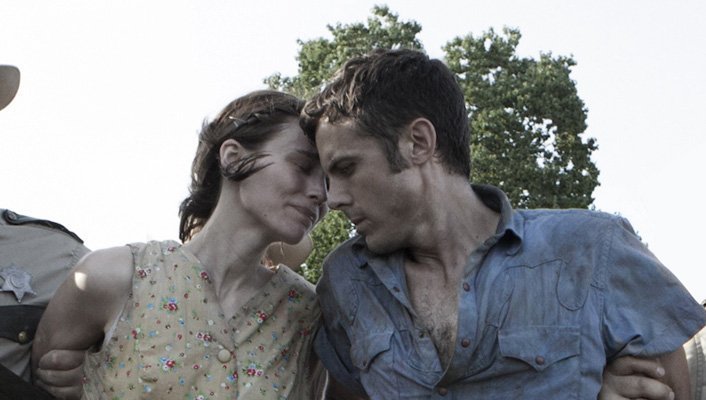 After a summer movie season full of bloated, expensive tentpole films that pour millions of dollars into visual effects and marketing campaign, Ain’t Them Bodies Saints feels like the perfect bit of counterprogramming. Set against the backdrop of small-town Texas, it tells the story of Ruth (Rooney Mara), who is struggling to raise her 4-year-old daughter while her outlaw husband Bob (Casey Affleck), serves out his sentence in the state penitentiary.

When Bob manages to escape prison and makes it clear that he’s headed back home to claim the family he left behind, Ruth finds herself faced with the prospect of going back on the road, living the rest of her life looking over her shoulder and waiting for the other shoe to drop. She loves Bob, that much is clear, but she’s happy with the quiet life she’s built for herself and her daughter, and her situation is further complicated by the attention of a smitten sheriff’s deputy (Ben Foster) who doesn’t know that Ruth, not Bob, was responsible for the bullet wound in his shoulder.

This outlaw yarn is one that we’ve seen before, and writer/director David Lowery makes it clear that his film is influenced by the likes of Robert Altman and Terence Malick, forsaking a clear narrative for haunting, beautifully-framed imagery. Lowery is less concerned with driving the narrative forward, content to allow his characters room to breathe, to simply exist – which would be fine, if the characters were just a little more interesting, enough for the audience to feel a genuine connection.

Instead, we’re left with pieces of a wonderful film and fragments of fascinating personalities, especially the retired crime boss (Keith Carradine) who runs the general store and keeps watch over Ruth. It would have been great to see Lowery’s characters fleshed out and fully realized, but we’re left with nothing but our imaginations to fill in the blanks. Ain’t Them Bodies Saints is a beautiful, melancholy film that feels like a work-in-progress, and hopefully Lowery’s next effort will tell a more complete story.