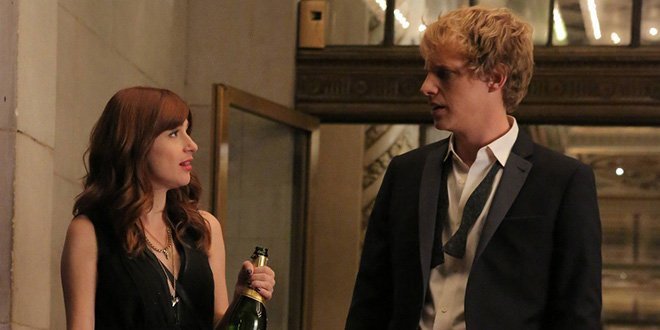 The League and It’s Always Sunny in Philadelphia may have disappeared from FX’s television schedule, migrating over to spinoff network FXX, but that doesn’t mean FX no longer has comedy offerings of its own. Last week, we spoke to Judy Greer and Nat Faxon about their starring roles in Married, and this week we’re catching up with the cast of FX’s other new comedy series, You’re the Worst, from creator Stephen Falk.

We already discussed the premiere episode with pilot director Jordan Vogt-Roberts, and this week series stars Chris Geere and Aya Cash were gracious enough to donate a few minutes of their time to chat about their roles on the raunchy, irreverent, and surprisingly sweet comedy.

When you first read the script for the pilot, did you know immediately that this was something you wanted to do?

Chris Geere: The part was originally written for an American to play, and then I read it and thought that Jimmy was so articulate and uses words in such a brash, kind of acerbic way, that I thought it lent itself more to the attitude of a grumpy British person. I was basing it off someone I know at home, who rants an awful lot and is very bitter about things, never really questions his own faults and blames everyone else. I wanted to try that, and Stephen concurred, which was fantastic. And that’s why we’re here!

Aya Cash: Yes, I did. My first response was “oh my God, I wanna do this, and they’ll never let me.” Just because I know how television and films work, and you often need names to get an audience, and I thought “I’m probably not enough of a name.” And I’m not exactly what the character description was, in terms of a typical “LA hot girl.” And I thought I could have a really good time ith this and do it justice if they had a little vision, and they did, so I get to do it.

Are there any similarities between you and Gretchen?

Cash: I think her sense of humor is close to my sense of humor, in terms of what I find funny is dry and self-deprecating and honest, and I really appreciate that about her. I also feel like, as an actor – and here’s a douchey actor quote – as an actor, you get to live out different lives through your character, so for me it’s super fun to play someone who is so narcissistic and just does whatever the fuck she wants.

So would you ever lie about having cancer to get Spice Girls tickets?

Cash: No, that would probably go too far. laughs] Though I would probably lie about a gym membership, which comes up [later]. We all tell little white lies, Gretchen just tells giant black lies.

There’s a very fine line to walk with these two characters – they border on being very unlikeable, but you manage to make them endearing.

Geere: It’s all credit to the writing, and the fact that Stephen has given us so many places to go in each episode. If it was just these unlikable people the whole time, I think people would switch off, because they would just be like “oh, he’s a dick, I don’t like him.” But every so often they’ll have a scene, and then you’re like “oh right, that’s why he behaves like that.”

We spoke to Jordan Vogt-Roberts about his work on the show, and he mentioned that he came back to shoot a few more episodes. What was the experience like working with him?

Cash: I love Jordan! Jordan is a taskmaster and a brilliant visual director, and also just a great human being. He gives a lot of notes and he works you really hard, but you have so much trust in him. He’s exhausting in the best way possible, and really pushes all of us to be the best that we can be.

Geere: He is hands-down one of the most artistic directors there is. His vision is just so original and so creative. He was wonderful to work with, and now I can very much call him a friend.

FX has always been known for pushing the envelope, but the sex scenes in the pilot are pretty revealing. Did you have any apprehension about shooting those?

Geere: Not really. If I was doing Fifty Shades of Grey, I think it would be about how sexy we both look. But I think the idea of the scene was these two people are only intending to spend one night together, therefore Jimmy’s trying to whack out his best moves, and Gretchen doesn’t really want to be there. It was about the awkwardness of these two people in this one night stand, rather than “making love.”

Cash: I’d never done a sex scene before, and I don’t do nudity, so I was terrified. But I was so excited about the script that I just didn’t think about it until we actually started shooting the pilot, and it was really scary, but more in theory than in practice. We had a lot of discussions about what I was and wasn’t comfortable with, and who would be on set, and how it would be shot and what positions would be used. And ultimately, we all wanted to make it really funny, and I think we got on the same page.

I really liked the choice to present the sex scenes as very matter-of-fact, rather than trying to make them steamy or exciting.

Geere: The first time two people get together intimately, it’s very rarely that sexy. The two parties are normally drunk, and one or both of the parties are trying to impress the other.

The restaurant scene in Episode Two is so painfully awkward, but it tells us so much about Jimmy and Gretchen as we watch them trying to be something they’re not. It’s uncomfortable, but it’s also hilarious.

Geere: Yeah, absolutely! When we read that scene for the first time, at the top of the page the stage directions were “Jimmy and Gretchen stand at the entrance to the restaurant in awkward silence,” and then in brackets, “this is the first time they’ve been together with clothes on.” [laughs] So we really played off that direction specifically. When they would call “action,” Aya and I would stand in silence for at least a minute before we said anything, just to build up that awkwardness.

Cash: That’s one of the scenes where Chris and I could not stop laughing, because it’s so awkward and funny. I think that ultimately, I come at every single scene more with pathos than with comedy, because I feel like comedy comes out of that pain. I think the more real it is, the funnier it is.

Well, I really enjoy the show, and I appreciate you taking some time for me today. I think you guys are in for a long run.

Cash: I really hope so! I’ve had a lot of amazing jobs with amazing people, and this is my favorite. I hope it goes forever. Six seasons and a movie!