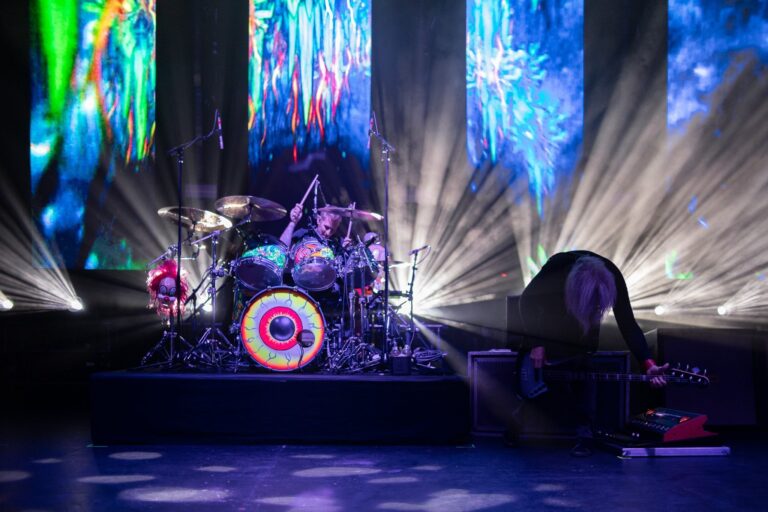 PHOENIX — Mastodon has been crisscrossing the country for the past few weeks, celebrating the tenth anniversary of their critically acclaimed fourth studio album, Crack the Skye. That celebration, a co-headlining trek with Coheed and Cambria, finally rolled into the Valley of the Sun this weekend for a stop at Comerica Theatre.

From the unmistakable opening riff of “Oblivion,” the Phoenix audience was on their feet, with fans closest to the stage pressed against the barricade, banging their head and shouting their approval. Sporting a close-cropped hairstyle instead of his usual curly locks, guitarist Brent Hinds created an interesting contrast with bass player (and fellow vocalist) Troy Sanders, whose long hair and unkempt beard remained intact. Hinds spent most of the evening laser-focused on the intricate guitar arrangements, rarely glancing up from his fretboard and leaving it up to Sanders and rhythm guitarist Bill Kelliher to imbue the stage with energy.

Performing Crack the Skye in its entirety (and with the aid of towering LCD screens displaying wild psychedelic imagery) not only served up live staples like “Divinations” and the title track itself, but also offered longtime fans an opportunity to experience more uncommon fare like “The Czar” and “The Last Baron,” all met with near-rabid enthusiasm from those in the front few rows. The remainder of the set found the band plucking a single track from four other releases — although curiously, they neglected to play any material from their most recent offering, Emperor of Sand.

After more than a month on the road, Mastodon heads to Austin, Texas on Tuesday for a show at Austin 360 Amphitheater before wrapping up the tour the following evening at The Pavilion at Toyota Music Factory in Irving, Texas. In the meantime, check out the full gallery of Mastodon photos from Comerica Theatre below, and click this link to view photos from Coheed and Cambria’s performance at the same event.