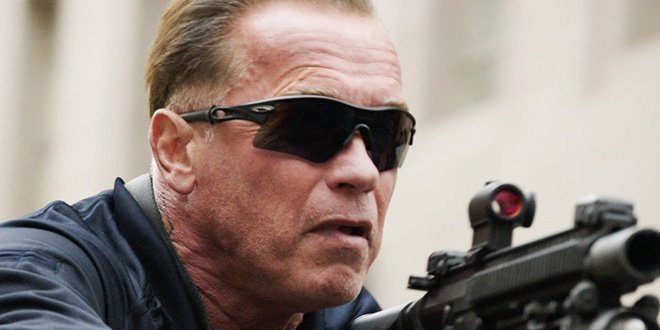 Typically when I hear the word “sabotage,” a smile comes to my face as I recall distant memories of a great Beastie Boys song and music video. Curse you for ruining that for me, David Ayer and friends, CURSE YOU! Sabotage had a lot of promise at the start; a drug bust, Breacher (Arnold Schwarzenegger) and his elite DEA team performing a little sleight of hand to help themselves to some of the cash during that bust and the domino effect created as a result of going to retrieve that money later only to find it has disappeared. A combination of action, drama and mystery that may work one day, but today is not that day.

The opening scene sets up the violent tone with ultra-bloody shots and the sometimes funny (but mostly overused) childish banter you would expect from an undercover brotherhood of mercenaries that are the best at what they do. During the tactical strike on a drug lord’s compound, we get a little peek into what types of characters make up this ragtag elite force. Mireille Enos plays Lizzy, the curs-like-a-sailor somewhat adrenaline junkie wife of fellow team member, the more level-headed, Monster (Sam Worthington). Grinder (Joe Manganiello) is a psychotic powerhouse who doesn’t stand down to anyone. Other known actors such as Josh Holloway, Terrence Howard and a few more round out the rest. At first it seems like these performances may save the film, however as time goes on these are the same characters we have seen time and time again. Passable, but nothing special.

Six months later a thorough investigation comes up short of being able to accuse Breacher and his buddies of stealing the money. While clean in the eyes of the law, everyone at the DEA suspects they did it. The team had been disbanded and Breacher has been relegated to a desk job in the hopes of forcing him out. After this attempt fails, the DEA calls the corps back into action with your typical “Here’s your gun and your badge” line (literally). After six months of no action, even trained professionals gets rusty, and when being put to the test it’s clear they are not as sharp as they used to be. After only one more exercise where Schwarzenegger puts his life on the line the team is back to performing like a well-oiled machine ready to get back in the swing of things.

It is clear the missing money is on all of their minds, however, they are putting it behind them and moving on. A task that is easier said than done when they start getting picked off one-by-one. Enter Olivia Williams to help investigate this mystery and add some sort of minor love interest for good ol’ Arnold. Good OLD Arnold. Schwarzenegger’s performance may come as a surprise to some. Sabotage has plenty of action, but don’t expect it to be the typical style Schwarzenegger usually gravitates to. Haunted by a past that reveals itself slowly, he is dark and brooding. The one-liners are sparse. For the most part, he is successful converting to the darker role, but his performance unravels towards the end and he just can’t quite pull it off. With that being said, I don’t think I’ll ever tire of seeing Arnold with a gun in hand and a big cigar sticking out of his smirking mouth. In some ways, he’s still got it.

The palpable tension of of David Ayer’s previous work is there, but after an hour and forty minutes you are ready for the obvious ending. I was actually quite surprised looking at my watch, as it felt much longer than that, and I got the feeling I was not the only one waiting to exit the theater. In a forced car chase towards the end the audience was laughing at moments that were not comical.  It felt more like an uneasy, “Ugh, I’m so done with this movie” kind of laugh. Bottom line, wait for DVD. Do you hear me? There is no need to be drawn into this trap. Are you catching what I’m saying? Listen all y’all it’s a sab…wait… CURSE YOU AYER!