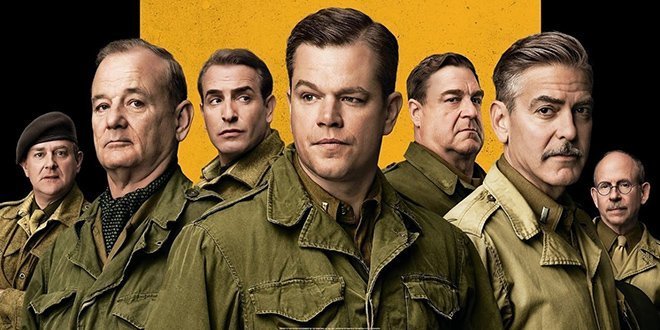 World War II movies are no strangers to the silver screen. Typically, they focus on a major battle or delve deeper into the toll it ultimately took on humanity, but amidst bridges exploding and cities being taken back under Allied control there was another story unfolding that few have shed light on in a major motion picture. Not only was Hitler grasping for world domination, he wanted the greatest art collection imaginable, and behind enemy lines thousands of pieces were being snatched up by the Nazi regime to contribute to the failed artist turned dictator’s “Führermuseum.” Priceless works such as the Ghent Altarpiece and the Madonna of Bruges were sought out, cataloged and passed along to secret locations. The Monuments Men was a special task force created to “protect what’s left and find what’s missing.”

While the actual Monuments Men unit was composed of a large group of museum curators, architects and the like (including women), The Monuments Men film focuses on a small troop of seven people sent to infiltrate the war zone in an effort to recover and return the artwork. This group is led by George Clooney (who also directed the film) with what should be an outstanding cast: Matt Damon, Bill Murray and John Goodman along with Bob Balaban, Hugh Bonneville and Jean Dujardin. Unfortunately, the cast is one of the weaker links. They’re still enjoyable, but it’s more of Clooney being Clooney, Murray being Murray, Goodman being… get the picture? There was almost a sense of George calling them up and asking “Are you bored? Wanna hang out and be in a movie?”

The history behind The Monuments Men is a fascinating premise. The Russians want the art too, however they mean to keep it as reparations for all they lost during the war. On top of that the German army which, eventually when it gets to the losing side of things, has orders to destroy warehouses full of masterpieces if Hitler is killed.  It’s a race to the finish, a race the Americans can only win by convincing a French “spy” (Cate Blanchett) that they will really return everything and not keep it for themselves.

The Monuments Men feels more like a made-for-TV movie. In what seemed like an attempt to pay homage to WWII movies of old, the music was more overbearing than mood setting. Between the Clooney monologues there was a nice balance of comedy and drama, a quick but forgettable laugh before a somber moment to draw you back in. But by the end, the film was practically drowning in its message of “Is saving the art worth the price of human life?” As it stands, this movie would be just as enjoyable when viewed on a couch in your living room, rather than at the theater.