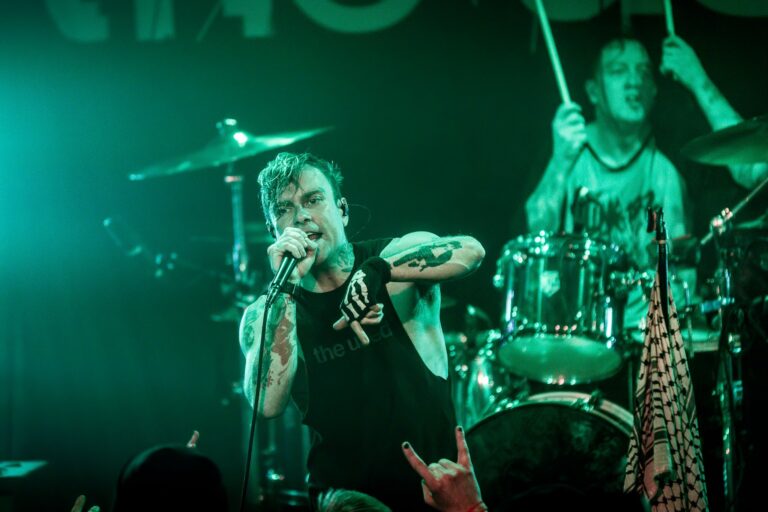 PHOENIX — After four weeks on the road, in some of the smallest venues they’ve played in over a decade, The Used wrapped up their latest tour on Saturday at the Crescent Ballroom. Frontman Bert McCracken first appeared onstage under a single spotlight, reciting the spoken-word intro to “I’m a Fake” as fans in the front row shouted along, their voices threatening to drown him out.

Over the course of nearly two hours, The Used tore through a wide range of selections spanning their 20-year history, leaning heavily on cuts from In Love and Death and their self-titled debut while sprinkling in a few newer selections, including recent single “Blow Me.” McCracken was all smiles, cracking jokes and playfully admonishing fans shouting requests to be patient. “I like the slow approach,” he confessed. “I like a lot of foreplay, I didn’t come here to just jam it in and get it over with.”

The charismatic lead singer also went to great lengths to foster an atmosphere of positivity. When an altercation broke out near the front of the stage, he intervened and demanded the offending parties distance themselves from each other, then invited one fan up for a hug and a stage-dive. Throughout the evening, he high-fived audience members in the front row, saluted fans by forming his hands into the shape of a heart, and repeatedly thanked the masses for their support over the years. And much like their last appearance in the valley, McCracken couldn’t resist a few choice words for the current President of the United States: “Suck my medium-sized penis, Donald Trump.”

Check out the setlist and full gallery of The Used photos from the Crescent Ballroom below. The band’s next effort, Heartwork, is currently available for pre-order on their official website.

Setlist
I’m a Fake
Take It Away
The Bird and the Worm
Listening
I Caught Fire
The Best of Me
The Taste of Ink
All That I’ve Got
Sound Effects and Overdramatics
Blood on My Hands
Blow Me
Paradise Lost, a poem by John Milton
Pretty Handsome Awkward
A Box Full of Sharp Objects
Choke Me