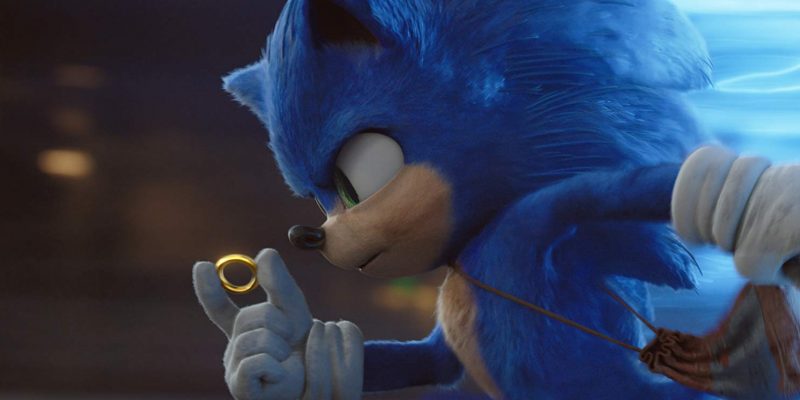 In last year’s Uncut Gems, Dinah (Idina Menzel) tells estranged husband Howard (Adam Sandler) “you’re the most annoying person I’ve ever met.” It’s easy to see why she feels that way, but it also reveals a limited point of view: had she traveled to the Pacific Northwest and crossed paths with Sonic the Hedgehog‘s titular speedster, she would find Sandler’s fast-talking New York jeweler positively delightful by comparison. As voiced by Ben Schwartz, the furry blue star of the long-running Sega videogame franchise is one of the most irritating and tiresome cinematic characters in recent memory.

Born with extraordinary abilities, Sonic was cautioned from a young age to keep his powers a secret from the rest of the world, with his surrogate mother, a kindly owl named Longclaw, offering some Man of Steel-inspired advice: “the only way to stay safe is to stay hidden.” Naturally, the impetuous youth ignores the warning and soon a group of nefarious baddies come knocking, prompting Longclaw to send Sonic to Earth with a bag of magical gold rings that act as portals to other dimensions.

Taking up residence near the small town of Green Hills (named for the opening level of the original 1991 videogame), Sonic spends his days observing the townspeople, particularly the local sheriff, Tom Wachowski (James Marsden), who the hedgehog dubs “Donut Lord” thanks to his affinity for a particular breakfast treat. He also goes out of his way to terrorize Crazy Carl (Frank C. Turner), a mentally ill local man who raves about the “blue devil” he glimpsed in the forest (a sequence where Sonic quickly disarms a series of traps on Carl’s property and then taunts him from the shadows feels especially mean-spirited).

When Sonic’s abilities manifest unexpectedly, leading to a blackout of the entire region, government intelligence agencies enlist “someone who knows technology” to investigate the source of the power surge. Enter Dr. Robotnik (Jim Carrey), a scientist with multiple PhDs and an army of drones who values machines above mankind. Dialing everything up to eleven, Carrey’s performance is a throwback to his work in the mid-90s, contorting his face and body into unnatural shapes and gleefully chortling lines such as “look what came out of my egg sack.” Clearly suffering from an out-of-control superiority complex, Robotnik insults, belittles and degrades everyone around him, bragging about his intelligence and frequently taunting the perceived shortcomings in others — in one exchange, he sneers at Tom “I was spitting out formulas while you were spitting up formula.” (Tom’s reply: “I was breastfed.”)

There’s very little about Sonic the Hedgehog that feels fresh or original. Marsden’s hapless small-town sheriff with the heart of gold is the laziest of archetypes, and Carrey spends the entire film basically recycling outtakes from the Ace Ventura films, The Mask and Batman Forever. Even the major action sequences have a “been there, done that” feeling — when a brawl erupts in a line-dancing bar, Sonic uses his speed to navigate through the crowd (who appear frozen in place), repositioning people and objects for maximum comedic effect when the action returns to normal speed. This might be a fun idea, provided that you haven’t been watching Evan Peters do the exact same thing since 2014 in multiple X-Men films.

As for the hyperactive and petulant protagonist, he certainly looks like his videogame counterpart, thanks to a torrent of internet backlash against the film’s first trailer, which prompted the studio to push back the release date in order to retool Sonic’s character model. This decision will certainly appease a vocal online fanbase who will no doubt pat themselves on the back, but will they pay money to see the little blue guy zip around the screen, talking a mile a minute and firing off painfully unfunny quips? The studio certainly hopes so, and a mid-credits scene lays the foundation for a sequel, but the thought of spending more time with Sonic or his arch-nemesis makes me want to roll into a ball and fly off a cliff at several hundred miles per hour.