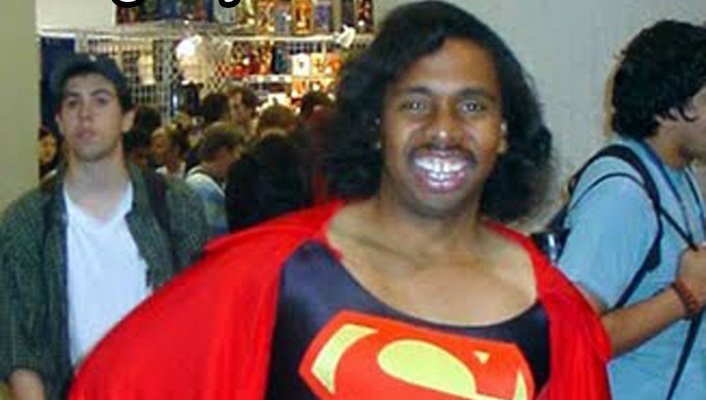 The Troxler Effect, or Troxler’s Fading, occurs when your brain gets sick of staring at the same thing. The result is that your optic nerve and central nervous system decide to join forces to fill in the blank spaces around the areas of what you’re staring at with the surrounding area. Your eyes make a choice (without letting the rest of you know) between giving you a kind of screensaver to enjoy in the meantime or suffering from an image burn-in like an old CRT TV or monitor.

This burn-in effect can result in visions of horrible creatures, relatives, ex girlfriends, The Goatman, et cetera. It’s like looking up at the sky and picking out shapes in the clouds – except in this scenario, it’s your brain and hardwired perception of past visual memory plucking horrors and other things out of thin air. It’s why playing “Bloody Mary” is so scary as a child. It’s why drinking a Bloody Mary while doing a buck-twenty in a shady van with the words “Aluminum Falcon” stenciled on the side down the 101 after 37 hours without sleep is so scary as an adult. The last thing you want to see in that situation is a cop. The second-to-last thing you want to see in that situation is anything your demented mind can cook up for you.

To fully explain why I’m even writing about this, I have to start at the beginning of my time spent as a member of the media at Phoenix Comicon. I have to tell someone now, before the images I now have permanently burned into memory come flooding back, rendering me stuck in the fetal position for days. I have to put it to words before I fight this fucking Ewok for the last of the sonic screwdriver replicas we scored off of the Gorn counterfeiter hanging out at third and Washington. The one with his meat wall of a friend that’s dressed in a bathrobe made to look like the TARDIS from Doctor Who.

This guy is a dick.

I woke up early to work my day job. A job so painfully, perfectly monotonous that something as simple as a spider spinning a web is enthralling to every co-worker within eyesight. We call one another over extensions to tell tales of dauntless arachnids filled with venom and malice.

I spend time there daily wondering what sort terrible spider thoughts they keep in their tiny minds, what sort of fucked up shit those eye clusters see every day as they’re going on spider dates, mating, and eating smaller creatures alive. I wonder if they know how awful it is to have to fight bark scorpions with a failing blacklight, and what it’s like to have sex with something and then immediately kill and eat it afterward. I guess I could just ask any number of my ex girlfriends for that answer.

After work, I downed my semi-regular cup of iced mud from Coffeebucks and parked at the transit station in Mesa, ready to hop the light rail and head to the Phoenix Convention Center. After boarding, a brutally homeless man approached me slowly, whistling the theme song from The Andy Griffith Show. I made the mistake of eye contact and immediately regretted it. The entire train was empty except for a single other denizen, but he sat next to me anyway. He was inexplicably wearing a baseball cap that looked as if it were from the late 1800s, was barefoot, and had a tattered t-shirt on with the Trojan Condoms logo emblazoned on the front and the words “Magnum Proud” on the back.  He asked me if I’d like to join him and his “sluts back home” in his hot tub. I thanked him for the offer but told him if I were going to contract Hepatitis C, I’d be getting it from Jenny McCarthy. I know she hasn’t been vaccinated.

With the song from “Damn Yankees!” stuck in my head, I left Shoeless Joe from Hannibal, MO to his own devices and proceeded off of the Valley Metro’s finest invention toward the convention hall. After meeting with Brent and Alan, I waited in line for my press pass, watching two adult men fight over which one of them had the better Superman costume. An argument that nearly came to blows. Both of the kids stopped dead in their debate when a man who could have been Christopher Reeve in his prime (the one who still had the use of his legs) walked by wearing his own Supes costume. The look of defeat on the two adolescent mountain goats’ faces is something I will cherish until the day I shuffle from this mortal coil.

I took note of a large woman (I think) in black spandex who had a fursuit interest and what looked to be a lack of funds. She had a terrifying cartoonish mask of what looked to be the bastard son of a pig and a wolf. She was roughly the size of a beached whale calf, clad entirely in black spandex. The pigwolf breathed heavily behind her (?) mask as I walked by, rotating only her head to look at me in a way that would make Stephen King start writing another book. I walked the floor with my fellow NerdRep.com comerades, taking note of all of the sights and sounds. The smells wouldn’t be apparent until the following day. The realization that the Pigwolf was stalking me didn’t set in until then, either.

3. Speed Dating and You: A Comicon Primer

My friends departed, leaving me to fend for myself in a den of disasters and delights. I was trapped in the pit in Jabba’s palace, but instead of a Rancor, I had to fight through a wall of furries in order to go anywhere. For those of you who don’t know, furries (or fursuiters) are a group of people who enjoy dressing up as anthropomorphic animals and then rubbing their genitals together. The Pigwolf was one of many. They have different offshoots, such as the cloppers, which are My Little Pony furries who write fanfiction about having sex with prepubescent cartoon ponies. In the Grand Heirarchy of Nerddom™, they are at the absolute bottom.

I wandered the showroom floor with the direction and wonder of a drunken baby, and made my way over to the meeting rooms where they were hosting the small informative panels. After trying my hand at Comicon speed dating and being made for a narc, I began poking my head into other rooms. What I witnessed was a cavalcade of Japanese animated pornography with every possible pop culture character you can dream up being penetrated. Everything is well and good until you end up looking over your shoulder to find an aroused, adult man drawing a picture of Severus Snape being given a blowjob by the Hogwarts Sorting Hat.

4. What the fuck’s an Otherkin?

I wandered past a mentally unstable man cupping his own genitals and speaking to what I had assumed was nobody. After investigation, I was educated that he was speaking to Sephiroth from Final Fantasy VII. He was an otherkin. Otherkin are a group of broken people who believe in the deepest parts of their brain that they have another living, breathing entity living inside them. Usually it’s a fictional character that someone else made up. More than usually, it’s depressing. As I walked away, he was staring at the ceiling directly above himself as if it had opened up and the bad guys from The Avengers were pouring down upon him to fight a war that only he was part of. I walked past a pretty awesome display of movie vehicles to bring myself back to reality.

I took the lightrail home that night questioning everything. Why was I doing this? Was writing this article worth losing my mind? Have I even left Phoenix Comicon, yet? Will I ever? Will it ever leave me? I stared into my glass of beer afterward, wondering if the Troxler Effect would take effect on the second day and start covering up the horrors before they were there forever. I drifted to sleep slowly that night, thinking about that god damned Pigwolf.

The sense of dread I felt as the Phoenix Convention Center came into view was assuaged when I took time to look at some incredibly well made vehicles modeled after famous cars and trucks from films. Alan and I sat in on a panel with Jewel Staite. Later, Kyle and I made an entire loop outside of the North Ballroom when Laurie Holden decided to just not do her panel in lieu of signing autographs for money. I spoke with an officer from a group called the Arizona Pathfinder Society and his enthusiasm for his hobby was heartwarming (full interview to come in a companion article). The exhibit hall was teeming with dozens of thousands of people eager to wait in line for autographs. They were cosplayers, they were fans. They were you and I. For every terrifying furry Pigwolf, there were a dozen people dressed in Star Wars costumes. For every one of those, there were five families of four. I had reached fandom Valhalla, carried there on the back of gorgeous women dressed as Elizabeth from Bioshock Infinite. This, not the terror, was what Comicon was truly about. This was my own Troxler effect, covering up the things I had seen the day previously.

And then the sun went down and the weird crept back across the Convention Center. If there ever was a god, he’s dead now. A flurry of more hentai, more fursuits, and more otherkin was waiting for me. Horrific, pathetic Bronies (adult My Little Pony fans who DON’T dress up and fuck one another) who had for ONE WEEKEND ONLY left their house danced around my brain like the heads of the creepy critters from the movie Labyrinth. Shoeless Joe crept back into my mind as I finally sought the respite of my bed that night. He whispered through his Methamphetamine-affected teeth to me.

“The night is dark, and full of terrors.”

So here I am on the final day of the Phoenix Comicon. I’m writing notes in my notebook as Wicket continues to gnaw at my kneecap in attempt to get an item that, in his Ewok mind, is the Holy Grail of geek artifacts. I’d trade it all for the chance to see my girlfriend right now. I’d trade this priceless Sonic Screwdriver for one Men in Black Neuralizer.

And I can’t wait to return next year and do it all again.