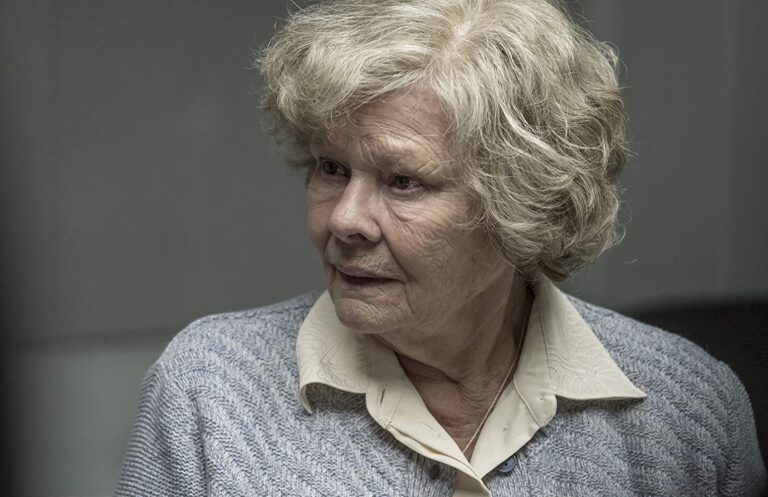 When we first encounter Joan Stanley (Judi Dench), she seems like a run-of-the-mill octogenarian, pruning rose bushes in her front yard or pausing to stare wistfully at the photos atop her mantel. But when a pair of MI5 agents show up on her doorstep to arrest her for treason, it’s clear that Joan is anything but typical.

“Back at Cambridge, you were known to associate with Communists,” accuses one of the agents. It’s a fact that Joan acknowledges, downplaying its importance and insisting that everyone was doing it at the time. “It was the age of foolishness,” she recalls, and soon we’re traveling down memory lane to 1938 as Joan (played by Sophie Cookson in flashbacks) recalls her first meeting with the enigmatic Sonya (Tereza Srbova) and her handsome cousin Leo (Tom Hughes).

The duo wastes little time in trying to recruit Joan, who seems especially naive despite being a brilliant student with a keen scientific mind. When she lands a job working on a secretive government project and, at the behest of Sonya, falls into an affair with her boss (Stephen Campbell Moore), Joan finds herself repeatedly under pressure to smuggle secrets out of the lab and into the waiting arms of Leo and his comrades — a notion that she initially resists before finally caving when she discovers, with a small degree of horror, exactly where her research is heading.

The elder Joan would have the audience (and the MI5 agents) believe that her intentions were noble, espousing her belief that giving both sides the same weapon would act as a deterrent against either side opting to use it. Unfortunately, neither the script nor Cookson’s performance are able to convey this, leaving young Joan’s motivations frustratingly ambiguous in nearly every aspect of her life, including her romantic entanglements. Chemistry between Cookson and each of her male suitors is non-existent, and Leo’s pet name for her — “little comrade” — elicits an eyeroll with each utterance.

Dench is criminally underutilized here, resigned to a handful of scenes that take place either in an interrogation room or in the parlor of her home. Most of her limited screen time is spent arguing with (and scowling at) her adult son (Ben Miles) or feigning bewilderment at the questions from MI5, as if the mountain of evidence piled on the table before her doesn’t exist. Cookson does the majority of the heavy lifting, but seems constantly at odds with Lindsay Shapero’s screenplay.

Red Joan is based on the novel of the same name, for which author Jennie Rooney drew inspiration from the real-life story of Melita Norwood, a British civil servant and longtime KGB source that was outed in her final years and dubbed “the granny spy.” Curiously, the end credits also acknowledge Norwood’s influence on the narrative, leaving us to wonder why the filmmakers didn’t just opt for a Melita Norwood movie in the first place, especially when so much of this fictional tale is lifted part and parcel from the actual events.

Perhaps it’s because the motives and actions of the real-life spy weren’t quite as noble as those of the imaginary Red Joan. But exploring those motives might have made for a more compelling drama, rather than painting a disingenuous portrait of someone who believes the best way to serve her country is to give up its secrets to a foreign adversary.