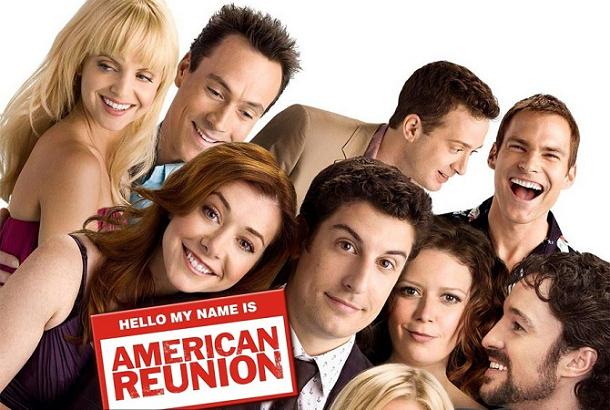 The original American Pie was my generation’s Porky’s or Fast Times at Ridgemont High. It was one of the most quoted movies of its time and brought raunchy R-rated teen comedies back to Hollywood while also launching some promising film careers. The smash hit was followed by some mediocre sequels and some awful direct-to-DVD spinoffs that didn’t involve the main cast, soiling the overall good will the series had gathered. Now the entire original cast returns to redeem what once was a breakthrough comedy franchise, and while this film is not at that level I’m happy to report American Reunion does succeed in delivering an installment worthy of the original American Pie.

[pullquote_left]A high school reunion is the perfect setting to bring back the franchise.[/pullquote_left]The thing that this film does best (outside of the mostly 90’s soundtrack of course) is return to the heart that made the first film special. A high school reunion is the perfect setting to bring back the franchise, making me wish they had held off on the other sequels, only because these two films work so well together. Part of the fun is getting re-introduced to each character and seeing where they ended up in life, sort of like the end of The Breakfast Club, but instead of a brief synopsis of their future lives you actually get to experience it. All of the characters have moved on and noticeably evolved into their adult lives while retaining some of their core personalities that we remember from the original movie, and it feels like visiting old friends.

The film focuses heavily on the boys of American Pie all returning to their 13 year (?) reunion. Aside from Alyson Hannigan’s Michelle, the girls in the film are barely given anything to do, and even she doesn’t get her fair share of laughs – as the accusatory wife, her role is reduced to a plot point rather than an actual character, but she’s still talented enough to get some sympathy from the audience. Seann William Scott steps right back into being Stifler and he’s every bit as funny (or annoying) as you care to remember him. Chris Klein’s Oz has a decent B-plot as pseudo-sportscaster celeb turned dancer with the stars, and Eddie Kaye Thomas’ Finch is odd and entertaining in his return role as a world-traveling hipster. The other completely forgettable guy in the group still acts like a whiny girl without the tiniest bit of funny going on, and should have been written off with one line of dialogue so we didn’t have to watch his grating C-plot with the wretched Tara Reid.

[pullquote_right]The real reason to see this film is Eugene Levy, who knocks it out of the park like a true pro.[/pullquote_right]But the real reason to see this film is one Mr. Eugene Levy as Jim’s dad. He was always the MVP of the franchise including taking a couple for the team in the DVD sequels. But the script by Jon Hurwitz & Hayden Schlossberg finally gives him some actual material to work with this time, and he knocks it out the park like a true pro. Jim’s dad is going through some hard stuff, and while they never let it get too tear-inducing, you still want to reach out and give him a hug. He is the heart of the film and manages to make you get a little nostalgic and emotional, but then switches gears immediately, causing you to unexpectedly laugh out loud.

American Reunion has its set of issues, including a silly plot (that went on for way too long) revolving around a girl Jim babysat for as kid that has now grown up to be a hottie. The audience knows Jim would never cheat on Michelle, so it’s annoying seeing everyone on-screen try to cover up indiscretion that never actually happened – not to mention that Michelle would never buy into the idea of Jim being so callous. And like all the other films in the series, American Reunion is quite a bit raunchy, and while most of it works there’s a fair share that becomes groan inducing. The movie also runs a bit long, clocking in at just under two hours, and had me looking at my watch by the time the cast finally made it to the actual reunion at the very end of the film.

Much like me, you might have asked yourself “Why do they need to make another one?” But it turns out there was actually some story left to tell. There’s nothing as groundbreaking or memorable as the original American Pie, and some of the side stories and “funny” situations are unintentionally bad, but fans of the franchise will still see a worthy bookend to the series. American Reunion is a nostalgic look back that has just enough mix of heart, laughs and raunch to be worth a look if you want a light-hearted laugh.

SECOND OPINION
American Pie was about a group of guys trying to hang onto their youth – American Reunion is about trying to reclaim it. With the entire original cast returning one more time, the film serves as the perfect final chapter before closing the book on Jim Levenstein and friends. There are plenty of laughs here for newcomers to the franchise, but those that grew up with the earlier installments will find this last slice of Pie even more enjoyable.