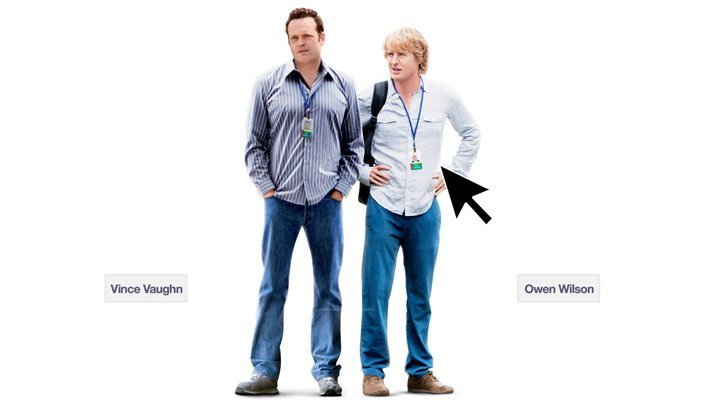 From director Shawn Levy comes The Internship, which reunites Vince Vaughn and Owen Wilson as a pair of friends who find themselves down on their luck, and in a last ditch effort, apply for a summer internship at Google. It’s actually a great title, as this movie is working hard at the start of the summer with the hopes of being ranked in the same realm as previous comedies from either actor.

Once on the Google campus as “Nooglers” they are split into teams, only one of which will be offered full time positions when all is said and done. Of course the super smart, born for this job villain of the film (Max Minghella) scoffs at them because of their age and chooses other talent, leaving Vaughn and Wilson with the rag-tag underdogs that nobody likes – you know, just like Old School, Dodge Ball, etc.

“Is there a shitty love story thrown in there so I can convince my girlfriend to go?” you ask. Why not, let’s throw one in there! Rose Byrne wastes her talents as a Google employee whom Wilson falls in love with while on campus. This, of course, is only touched on here and there and not a driving part of the story. Their date scene is actually one of the few I genuinely enjoyed, along with a great cameo towards the beginning when Wilson is trying to make ends meet as a mattress salesman.

Vaughn and Wilson return to their comfort zone as fast talking sly guys who give each other pep-talks and pet names while carrying-on like brothers more than best friends. Their performances were good, so I wouldn’t say they were phoning it in as much as turning on autopilot. They obviously have a good rapport and are used to this back and forth banter – we’ve just seen this too many times before. There are some funny moments, however they’re heavily outnumbered by too many pop culture references and jokes that withered and died in the empty space between the theater speakers and my ears.

While a younger generation that’s not as familiar with Vaughn and Wilson’s work may find The Internship enjoyable, I left thinking it was just a shell of what these two used to produce at the peak of their career. I don’t know if they needed the money or were just bored and missed being on screen together – regardless, I would pass and move on to a film that has more solid credentials.