REVIEW – ‘This is the End’ offers laughs on a cataclysmic scale. 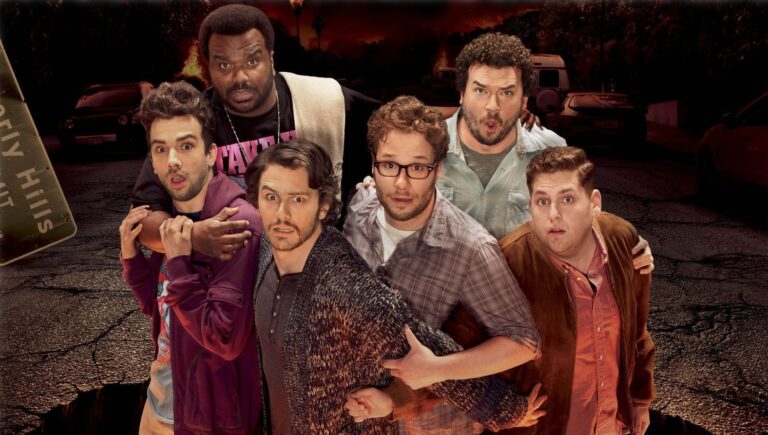 If Hollywood can be believed, global apocalypse is all the rage right now, but the team behind This is the End are taking a much more absurd and comedic approach than most of the big-budget fare currently being churned out by the studio machine. Written and directed by Seth Rogen and Evan Goldberg, the film sees Rogen and his frequent castmates attending a party at James Franco’s new pad, just as the end of the world draws nigh.

[pullquote_left]The film is genuinely funny and manages to provide plenty of surprises, particularly during the third act.[/pullquote_left]With the Hollywood hills ablaze and hellish creatures lurking around every corner, Rogen and Franco barricade themselves inside the house alongside Jay Baruchel, Craig Robinson, and Jonah Hill, with their only provisions being a few bottles of water, a Milky Way candy bar, and copious amounts of drugs. The unexpected arrival of Danny McBride sets everyone on edge, and the ensuing quest for survival includes frequent bickering, hallucinogenic episodes, an ax-wielding starlet, and a seemingly endless supply of dick jokes. Seriously, if you get offended easily, avoid this movie at all costs, because nothing is sacred.

[pullquote_right]Seriously, if you get offended easily, avoid this movie at all costs, because nothing is sacred.[/pullquote_right]The biggest appeal of This is the End will come from watching celebrities play warped parodies of themselves, such as the lecherous, coked-out version of Michael Cera who can’t keep his hands off Rihanna’s ass, or the overly affectionate and sickeningly sweet approximation of Jonah Hill that just wants everyone to be friends. But aside from this novelty, the film is genuinely funny and manages to provide plenty of surprises, particularly during the third act.

Fans of Superbad and Pineapple Express will feel right at home, especially with frequent references to the latter sprinkled throughout. Rogen and Franco are a brilliant comic duo, and the hilarious supporting cast does plenty to elevate their game. This is the End may be the most ridiculous movie of the year, but it’s also a front-runner for the funniest.