REVIEW – Frantic pace distracts from ludicrous events in ‘Now You See Me.’ 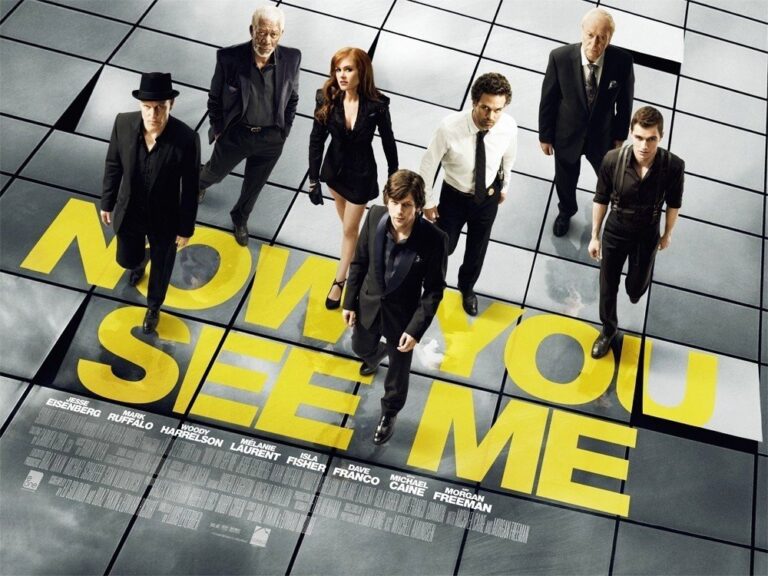 The funny thing about Now You See Me is that until just recently, nobody had seen anything about the film. The marketing only just kicked in and, seeing that this is a summer film, silence is usually a sign the studio isn’t very confident in their product. The movie is seemingly lost in the summer crowd and placed in the unfortunate position of opening against a Will Smith flick (After Earth) that will most likely spell box office doom for this film that’s utterly ridiculous but has some fun with its new take on a common premise.

The core cast of magicians dubbed “The Four Horsemen” (Jesse Eisenberg, Woody Harrelson, Isla Fisher and Dave Franco) are surprisingly NOT the protagonists (that role goes to Mark Ruffalo). The Four Horsemen are more of an unattainable goal that Ruffalo’s character is struggling against and we get to see them pull off incredible magic heists in front of “live” audiences while Ruffalo and company trip over themselves trying to bring them to justice. Eisenberg and Harrelson pick up right where they left off with their Zombieland chemistry, but Fisher and Franco are given little to do and they do very little with it. Ruffalo, on the other hand, piggybacks the film playing the audience’s eyes and ears on the ride, and it’s tough to decide who to root for because both sides are equally likable.

[pullquote_left]Many choices made failed the film, especially during major sequences.[/pullquote_left]The aforementioned ride gets started from the opening scene and moves at a manic pace, weaving in and out of elaborate action scenes and Ocean’s Eleven style heist maneuvers that leave no time to ponder the plausibility or logic behind what’s going on. Director Louis Letterier (The Incredible Hulk) has more misses than hits on his resume and pulls off some really fun action sequences and funny character interactions but ultimately over-directs Now You See Me. CG was used at times where practical effects would have worked just as well and gimmicks intended to make certain shots interesting just ended up making the scenes look fake.

One thing the film does well is the classic magic trope of misdirection. The cast is filled with the interesting actors already mentioned as well as go-to veteran actors Morgan Freeman as a “magic-debunker” and Michael Caine as the Horsemen’s financer that would appear to have predictable story arcs, but that’s not entirely true. Refreshingly to the contrary, there are quite a few unexpected plot twists that, while all didn’t totally make sense to me, I legitimately did not see coming. Now You See Me does a nice job keeping you guessing for the majority of the movie and that’s a rarity these days.

[pullquote_left]It has a really cool premise that it mostly delivers on.[/pullquote_left]The summer movie season is in full swing and there are plenty of options at the cinema, but Now You See Me certainly has an argument to be in the mix as a secondary option. But the film is also full of holes, laughable scenarios (an ancient magic order called The Eye?!), and is pretty ludicrous, to put it mildly – yet it also manages to have a really good time despite all that, making it worth a look if you’re burnt out on superheroes or are just in the mood for something a bit different from the other, louder summer blockbusters.