REVIEW – Hyper-patriotism distracts from action in ‘Olympus Has Fallen.’ 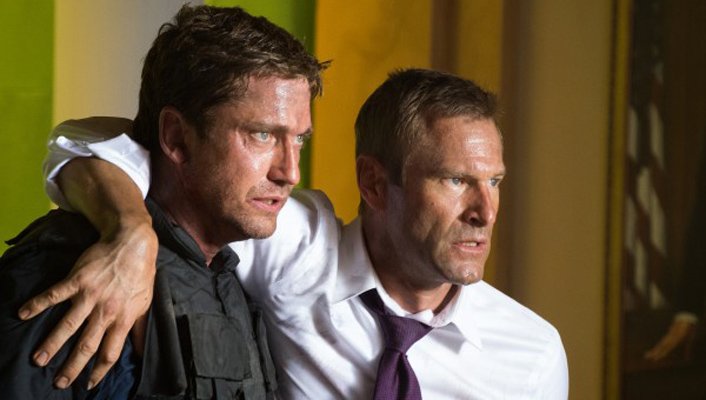 I didn’t expect much from Olympus Has Fallen. Billed as yet another “ex-Special Ops guy saves the president from bad guys” film, I sat down and prepared myself for a forgettable little popcorn flick. Instead, this was a huge blast from Uncle Sam’s johnson, all over the faces of unsuspecting audience members. There was more “America, fuck yeah!” in this film than there was in Team America: World Police, more fist bumping in front of Old Glory than in The Patriot.

Once “shit gets real” about 30 minutes into the film, every single scene featuring Gerard Butler is stunning, fun, visceral, visually offensive, and hilarious. This movie’s action scenes took the best of the Die Hard series, tossed in some Escape From New York, added a few spoonfuls of The Raid: Redemption and crammed them together for a supremely enjoyable experience. There were moments during the violence that I actually winced, and Butler achieved several serious outbursts of laughter from me. Antoine Fuqua, known best for directing the incredible film Training Day, did a solid job reining Butler in and not making the action scenes too nebulous to understand (a huge problem with action films these days).

Now comes the bad part: every single scene without Gerard Butler was simultaneously flatter than Keira Knightly and more atrociously cheesy than anything I’ve seen on a movie screen in a long time. The existence of any character outside the White House was completely pointless – I can’t even remember any of the other actors, because they only existed to annoy. The plot reduces North Korea to an entire country of despicable terrorists, and Morgan Freeman literally shows up mostly to prove South Park right and explain the plot to the audience. I can’t name a single good thing about this portion of the movie other than Radha Mitchell briefly showing up – she made me think of Silent Hill, which took me to a better place.

So, in my humble opinion you should see this movie at some point. But be sure to have a lot of wine to go with all of the cheese on screen.