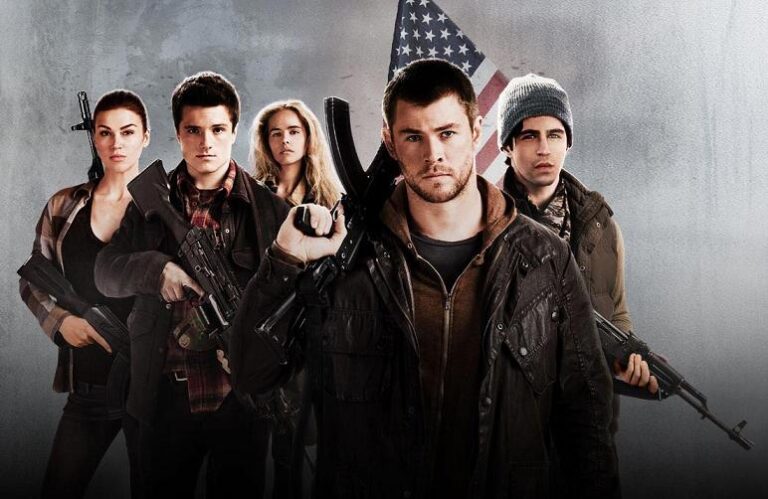 Red Dawn should have been on movie screens two years ago, but wound up getting shelved when MGM’s financial woes crippled the studio. The film is a remake of the cult classic of the same name, with a young Patrick Swayze and Charlie Sheen leading a cast full of up-and-coming stars whom are forced into guerilla insurgency in their hometown after the US is invaded by the Russians. Thanks to the budding careers of Chris Hemsworth (Thor) and Josh Hutcherson (The Hunger Games), the update found a new home and will finally be hitting screens this Thanksgiving weekend after gathering dust for a few years, but fans of the original may wish it had stayed shelved, because 2012’s Red Dawn is a weightless by-the-numbers action flick that, unlike the original, takes very few risks in an attempt to be as audience-friendly as possible.

The story is one that seemed too far-fetched to be plausible outside of the Cold War days of the original’s release: the United States is attacked on the east and west coasts simultaneously by a combined military force of North Korean and Russian soldiers, and regular American neighborhoods are turned into battlegrounds. In the Washington town of Spokane a group of high school football players and their friends, led by the quarterback’s recently returned Marine brother Jed (Hemsworth), decide to make the lives of their new occupiers a living hell and help their town fight back.

The remake does have some things going for it, including a brand new take on the disturbing yet breathtaking visuals during the invasion, some well put together action sequences and the God of Thunder himself, Chris Hemsworth, proving once again that he’s a natural movie star. In all honesty, the film will probably play much better to audiences that did not grow up with the original, as did my generation. Everything in this version feels very cardboard and lacks any real consequences. Far too few of the cast members become casualties, and the ones that do are mostly underdeveloped so you feel next to nothing when they meet their fate.

What made the original so disturbing  was the sense of dread and isolation these young high school kids felt, being cut off from any information while living in the woods, literally freezing and starving to death during the heart of winter while trying to maintain a resistance that they have no idea is even making a difference. In the 2012 version, the kids seem to be eating well, and are perfectly comfortable and look pretty while staging their insurgency from the woods, and some seem to even enjoy their new lives. Don’t even get me started on the inconsistencies and logic jumps that rip you right out of the film, like how a cell phone still works after an EMP wipes out the town’s electronics and it’s been months since the phone has been on a charger.

The cast does its best with some pretty underwritten characters, and Adrianne Palicki (Friday Night Lights), Josh Hutcherson and Chris Hemsworth hold the film up pretty well, but Hemsworth’s on-screen brother Josh Peck (Drake & Josh) is just awful and annoying. He sounds like he’s got his mouth full half the time when he speaks, and the other half he looks like he’s about to cry, but to his credit the writing didn’t help the character, having him do cringe-inducing boneheaded things to endanger his friends throughout. Thankfully, Jeffrey Dean Morgan brought his gravitas to the latter half of the film as an actual Marine that teams up with the kids and provides a ton of exposition on the state of the US, post-invasion.

The biggest divergence from the 1984 film and one of the biggest reasons the film left a bad taste in my mouth is the ending. For the sake of our readers I won’t go into details, but the new ending is your typical cookie-cutter Hollywood garbage that’s designed to make you feel nice and then completely forgotten about fifteen minutes after you leave the theater. Not to mention my personal nerd-rage realization that the most iconic and well-known sequence from the original – the “AVENGE ME!!” scene – isn’t even in this movie!! That should be the first thing you write when doing a screenplay for a Red Dawn remake!! I can appreciate wanting to separate this film from its predecessor, but it’s such a memorable moment from the original that the absence of that line is a travesty.

Clocking in at least 20 minutes shorter than the originally announced 114 minutes, the movie thankfully moves at a brisk pace, so fast that you really don’t have time to take in the scope of anything that’s happening, nor really be moved by it. The cast is fairly strong and the action feels fresh, being set primarily in suburban America (chilling unless you played Modern Warfare 2), but ultimately Red Dawn is a watered-down version of the original that may please non-demanding action fans looking for pretty people blowing things up, but completely lacks any real emotion or depth.