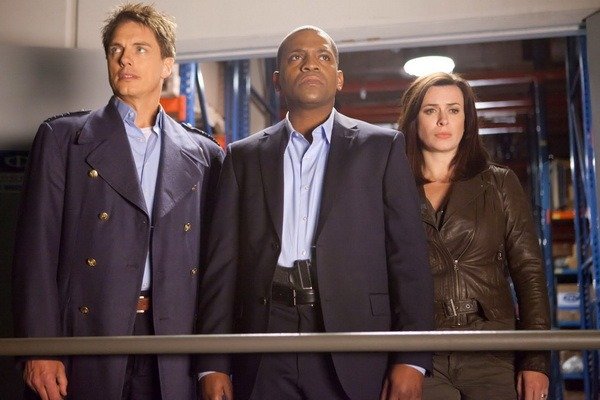 In January of this year, I began my long viewing trek through the modern run of Doctor Who, but I had an ulterior motive for doing so – I wanted to watch spinoff series Torchwood, starring the complex rogue Captain Jack Harkness. The show had a reputation for its willingness to take risks, and it turns out there really isn’t much choice when your show’s lead, played by the great John Barrowman, is a poly-sexual immortal man leading a team of defenders against the extraterrestrial.

You read that right: poly-sexual.  Men, women, aliens… it’s all a party to Captain Jack. He’s kind of awesome.

The show has evolved quite a bit from the X-Files 2.0 style of the first two seasons. The follow-up mini-series Children of Earth was incredibly dark and intelligent, and mostly well-received by critics and audiences. Now the team (or what’s left of it after the events C of E) has finished its latest adventure after jumping networks from the BBC to Starz, hence the relocating of the team to the US for the new installment entitled Torchwood: “Hey everyone! Jump on board! We’re new viewer friendly!” *ahem* sorry… Miracle Day.

In this season, the risk Torchwood took was re-inventing itself for an American audience by dialing down the sci-fi and introducing one of the more original concepts of any show in recent memory: What if one day, without warning, no one died? Oh, you can still be hurt. The human body still functions like normal. Heart attacks? Car accidents? Impaling? They still happen. But people don’t heal like Wolverine. They live on. In agony.  Pretty messed up, right? But also brilliant. Well, my friends, that’s our show.

Most notable is Bill Pullman’s totally unexpected and disgustingly riveting portrayal of convicted pedophile Oswald Danes. I didn’t think Pullman had this kind of performance in him. Not all of his material is well-written, and the overall character arc isn’t essential to the overall plot, but Pullman’s performance shines through, making Oswald Danes so intelligently creepy you can’t take your eyes of him. He stole every scene and generally saved the B-plots of the season from mediocrity.

As much as I’d like to declare Miracle Day a masterpiece of science fiction television, it’s not.  Is it good? Absolutely. Sometimes it’s even great, and fans of modern, cerebral science-fiction like Lost and the new Battlestar Galactica will feel right at home.  But the season (or “series” if you’re British) actually suffers from having too many episodes. Sounds crazy, I know. Who doesn’t want more episodes of a good show? But Miracle Day had the awkward order number of 10 episodes, which resulted in losing focus at times, and dragging at others. With a shorter run, maybe five or six episodes, they could have told a much cleaner, stronger story along the lines of Children of Earth.

Instead, they had clunker episodes that just screamed of being filler material, extinguishing any momentum they had managed to build up. It seems as though with the Torchwood series, more is less. I’m all for exploring every aspect of the far-reaching miracle, but not in a compressed season. An episode revolving around Esther’s crazy shut in sister? No thanks, can we talk about morphic fields some more? In addition, Miracle Day made the mistake of invoking some of the most boring trademarks of shows like 24, including a mole in the CIA, endless techno-babble, and unnecessary torture interrogations.

I’ve heard Miracle Day described as the most interesting show that nothing happens on. I actually think that is fair and… wait for it… yes, an actually positive assessment. Sure, entire episodes go by with little or no action. But I found myself honestly intrigued with the smaller details of society’s reaction to the events of the narrative. How do the religions take this event? What industries try to profit from it? How does the government react? How do hospitals and medical care deal with having no patient casualties?  This particular topic delves into some of the darker moments in Torchwood history. The government decides to group the wounded into three categories, eventually trying to dispose of the “should be medically dead” category (aka “category one”). The concentration camp-like solution to the increasing population seems disturbingly believable, and it’s not hard to imagine that in our reality, it would probably be handled in a similar fashion.

So in case you hadn’t noticed, we’re not battling space aliens with lasers this season, people. But it makes for smart, subtle genre TV.  Look how far we’ve come.

While the majority of the season is fairly grounded, the sci-fi does come back a bit for the concluding episode. The ending is pretty damn entertaining, with great performances all around, but the writing takes a few cheap shortcuts in its explanation of the miracle and the people involved in it. It does, however, nicely set up a continuing Torchwood series with a character-related plot twist, although word on the internet is that Starz and showrunner Russell T. Davies aren’t keen on bring the team back. That’d be a shame, but maybe now Captain Jack can make his much-anticipated return to Doctor Who and meet Matt Smith’s Eleventh Doctor.

When viewed as whole, Torchwood: Miracle Day  is the type of smart, thought-provoking science fiction television that is sorely needed in pop culture today.  The sheer scope of the narrative sometimes causes the show to explore too many tangents at once, and the show buckles under its own weight,  but the premise is so unique and interestingly portrayed that it manages to hold things together enough to solidify Miracle Day as one of the better genre shows in recent years.

Torchwood may not last forever, but as evidenced in Miracle Day, that’s probably a good thing. I highly recommend you give it a shot.