REVIEW – Come on in, the water’s just fine in ‘Pacific Rim.’ 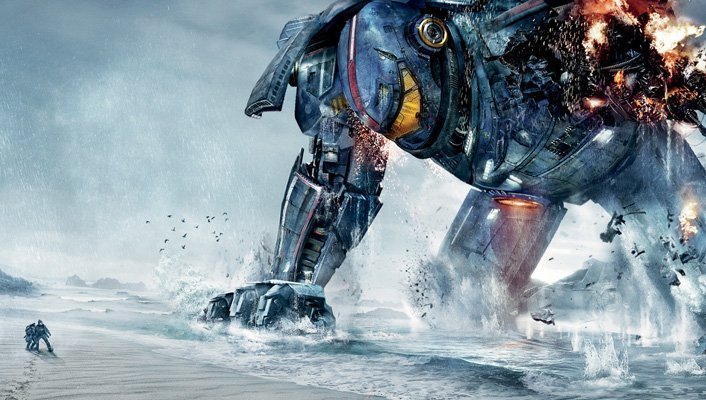 There are two things you need to do before walking into the theater for Pacific Rim. First, take everything you know about science and physics and leave it at the door. Second, go back to the cashier and trade in your 3D ticket for a regular one, otherwise you may miss out on all of the great monster-on-robot action! More on that later.

The film has a great opening that explains how the monsters, known as kaiju, are emerging from an inter-dimensional portal deep in the Pacific Ocean. After the first Kaiju takes far too long to bring down, and at the cost of too many soldiers, he world comes come together to build titanic robot defenders known as Jaegers. In come brothers Raleigh (Charlie Hunnam) and Yancy (Diego Klattenhoff), who pilot the American Jaeger known as Gipsy Danger. The machines are so massive that it takes the mental capacity of two people performing a “mental hand shake” to bond in what’s called “The Drift.” This is a sweet spot where they connect through sharing memories that strengthen the bond. I actually like this idea – it make sense and comes into play later as an interesting plot device in a couple of ways.

During a battle with one of the larger kaiju, Raleigh’s mental connection is severed when his brother is viciously ripped out of the cockpit. He is forced to pilot the Jaeger back to shore on his own mind power, which has only been done once before. After suffering the loss of his brother, Raleigh shuns his talent as a Jaeger pilot and disappears into society. The Jaeger program continues without him and is a roaring success.

Flash forward and the world is hurting again. The Kaiju attacks are happening on a more frequent basis as well as penetrating further into the coast, not to mention the fact that they are getting bigger, felling Jaegers left and right. The world government believes the robots are no longer cost effective, and instead want to build a giant wall to keep out the big baddies. The Jaeger program is disbanded and the Marshall, Stacker Pentecost (Idris Elba) is forced to take it underground to form what he brands as “The Resistance.” He has a plan to end the war once and for all, but it requires a certain pilot to take the helm once again.

It was hard for me to figure out if I liked this film or not – it’s a blast in some parts, but it feels like it could have had more fun with itself. Wait, that sounded bad. Anyway, the film is focused on two primary Jaegers: Gipsy Danger from America and Striker Eureka from Australia. The three-armed Crimson Typhoon, piloted by a team of Chinese triplets, and Cherno Alpha, a Russian model that looks like a tank combined with the cooling tower of a nuclear power plant, are extremely under utilized. But listen to those names! Look at those descriptions! Director Guillermo del Toro was having fun and it shows on screen. With that being said I don’t see how they could have crammed more action into a movie that is clocking in at 2 hours 11 minutes. Aside from the fantastic Jaeger designs, the Kaiju are also very stylized, taking on similar traits to animals of Earth. It’s clear they are very ‘del Toro,’ and it was fun to see which new creation was emerging from the abyss.

Let me expand on my earlier comment about 3D. I’m not using that technology to take the movie’s rating down at all. After all, that’s not entirely the movie’s fault, as you do have the option to see it without those fashionable glasses. But there are portions of the physics-defying fight scenes that are hindered by it. A lot of the fights take place on dark and stormy nights, and dark lighting is not so good for 3D. In its defense, there are some brighter scenes that do look great. One in particular features scientist, and comic relief, Newton Geiszler (Charlie Day) trying to avoid a particularly persistent monster.

Let’s talk love story. There’s a female interest introduced in the form of Mako Mori (Rinko Kikuchi), who is seemingly the Marshall’s right-hand woman and ultimately becomes the second pilot teaming up with Raleigh. Through entering ‘The Drift’ they have a bond that lightly touches on love, yet they never say it, nor do they beat you over the head with a victory kiss. Again, the way del Toro uses the mind meld is appreciated in that respect. And it wouldn’t be a proper review without referencing Elba’s line from the trailers: “Cancel the apocalypse, but not your plans to see this movie!” Wakka wakka! By the way, stay in your seats during the credits for a little something extra.

Pacific Rim is not a movie that’s gunning for an Oscar and it knows it. Turn your mind off and prepare for knock-down, drag-out clashes on an epic scale. When you get down to it, the story is really nothing new but does a good job of carting you along from battle to battle, which is why everyone went to the theater in the first place. Throw in the odd style and flare that Guillermo del Toro brings to all of his movies and you’ve got yourself a solid film that fits right in with the summer movie season.