SXSW Interview: Constance Zimmer on ‘Results’ and Returning to ‘Entourage’ 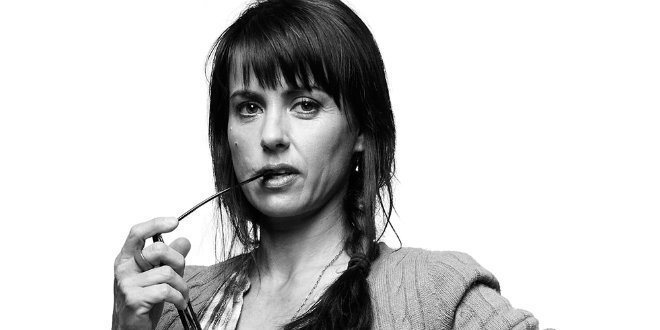 Constance Zimmer is probably most recognizable for her role as Dana Gordon in the hit HBO series Entourage – although her portrayal of political reporter Janine Skorsky in Netflix’s House of Cards has also won her plenty of acclaim. With a starring role in an upcoming television series, and an ongoing voice-acting gig, she manages to keep herself busy – but she still finds time to do films here and there, including popping up in Andrew Bujalski’s latest effort, Results.

I sat down with Constance Zimmer at the Intercontinental Hotel during the SXSW Film Festival to talk about her role in Results, as well as her work on the new Transformers animated series and her upcoming return to her most iconic role in the Entourage film. Check it out below.

Nice to meet you. I’ve been a fan of your work for a long time.

I appreciate it. I get excited when people actually know who I am.

Of course I know who you are. You’re Dana Gordon!

It’s funny, I can be standing on a street corner and people will be like “Dana Gordon!” And I’m like “Yes, that’s who I am.” [laughs]

So let’s start by talking about Results. What attracted you to it, what made you want to be a part of it?

Well, I was a fan of Andrew [Bujalski] to begin with, and I think for me… the foray into indie films, I felt like who better to do it with than Andrew Bujalski, who’s kind of one of the kings of indie filmmaking. I was also excited because the part was something I don’t get a chance to do very often, because in television I’m very much put inside a box and playing a very specific kind of woman. And I really liked that Mandy was the complete opposite of me as a person, and being able to portray this woman that, by all accounts, has her shit together – and in a completely different way than the other women that I play have their shit together…

It’s different shit, right? Which is kind of cool. And you know, to have sex scenes with Guy Pearce, I feel like you don’t really turn that down. [laughs]

Can he possibly be that handsome and charming in person?

Yeah, he is! It’s quite terrifying. And especially because he and I had such a short amount of time, because I’m not in the film very much and our stuff takes place over these little bit pieces. And in the short amount of time that we were together, it was as if I had known him for years and he was like my soulmate. [laughs] But he’s amazing, he is quite that amazing.

There’s this scene you have, where you’re talking about crossfit and paleo and all these fitness buzzwords are just pouring out. Do you relate to any of that stuff?

No, that was the stuff I had to research. I knew of paleo, but I didn’t know the logistics of it. Especially when we have our scene where we’re eating dinner at this paleo restaurant, Andrew was like “alright, just improv what you guys would be talking about at a paleo restaurant.” And I was like, thank God I did some research, otherwise I wouldn’t know what I’m supposed to be eating.

So no, that stuff I had to research, because I don’t do any of that. And I know that for my health and the future of my life, I should be exercising all the time. But I feel like I walk so much, and I do so much with my kid, and I live a very healthy lifestyle as far as what I eat and what I put in my body. So I’m doing that for myself. I don’t work out, even though I should. I just hike a lot.

I’m the same way, I love hiking and being outdoors.

I will tell you, though, I was a hip hop aerobics instructor.

I was. [laughs] You heard it here first, I haven’t told many people about that, but I feel like this might be a good time to talk about it.

I demand an explanation.

When I came out of high school, and I moved to LA and I went to the American Academy of Dramatic Arts, I didn’t want to be a waiter, I didn’t want to do the things that all actors do. And I thought, “I can get in shape and have a job at the same time.” So I was a hip hop aerobics instructor, I think it was at a 24 Hour Fitness, in Pasadena. That’s a time of my life that I kind of forget about a lot. And maybe that’s why I don’t like to work out now, because I had to do it so much and so often.

You mentioned earlier that you tend to get put in this box for most of your TV roles. I feel like that box is filled with a lot of bad words, because most of the characters you play tend to have a bit of a potty mouth.

Yes! You know, I think people really like women saying bad words and getting away with it, and it feeling like their second language, as opposed to using it in a fight or an argument. But I don’t know where it comes from. Maybe I have a potty mouth in real life and it just comes naturally, so we just kind of throw that stuff in there.

But I will say that I think it was also the foray into HBO having a show where you could curse, and it was so exciting and it felt like “oh my God, you can curse on television!” We all curse in real life. Network television tends to make versions of people that exist in the real world, whereas with cable, you can be the people that we are. You can curse, you can be crude, and you can get away with it.

Look, I talk that way more than I should. But now, having a daughter, I can definitely monitor myself a little better. But I love it, I find it incredibly freeing to be able to curse as much as I do. [laughs]

Do you ever find that sort of language creeping into your personal life when it shouldn’t?

Probably, because I do it in my work as well. I’m on a new show now, and we’re not allowed to curse as much as I would like to, and as much as I think my character should. So now it’s about trying to find bad words that you can get away with that aren’t horrible.

Like, I really fought to say the word “pussy” on this show, and they were like “I don’t think we’re going to be able to say that, you have to say hoo-ha.” And I was like, “I won’t do it, I refuse to do it.” I would rather say “vagina” than “hoo-ha.” People don’t talk like that.

Which is why I think the characters in Results are so relatable. The characters are real, they exist, they’re flawed, and that’s okay. Nobody is trying to be a perfect version of that character that exists in real life, right? So when we start monitoring these people, it makes them not seem real. Anyway, I won the battle, and I do say “pussy,” so I’m very excited. [laughs]

It’s the worst! Like, it’s fine if my seven-year-old says it. But even then it’s like “please, who are you fooling?”

Results is the first film you’ve done in awhile. You’ve been doing a lot of television work lately, but what made you decide to jump back into film?

Well, I don’t get offered many films. I did another movie right before this one with Taylor Lautner, called Run the Tide. So that was kind of great for me, because I did two movies in one year. But for this one, even though the part was small, it felt like I had a purpose. I do get offered a lot of roles in indie films to play a version of Dana Gordon, and that’s something I’m not interested in doing. I want to use films to show all the other stuff I do, besides that, you know?

Speaking of doing other stuff, you’re working on the new Transformers cartoon, right?

How has that experience been?

That’s honestly one of the greatest jobs I’ve ever had. The animation world is something I’ve been trying to get into for so long – and voiceovers, in general. Everybody has always said “you have such a great voice, why are you not doing voiceovers?” And I’m like “you guys, I’m trying, but nobody will hire me.” So it’s kind of exciting that the first cartoon I got was Transformers. It’s great, it’s so much fun.

But I felt so bad, because I didn’t watch Transformers – I’m a girl, and it just wasn’t in my repertoire of being a kid. The guy who voices Optimus Prime walked in, and I didn’t know who he was. I had no idea. And all the guys in the room, they all got down on their knees and they were all like “oh my God, we can’t believe you’re here.” And I was like “who is that?” I was such a girl. But of course, now I see the genius that he is, and what he’s created.

There’s a whole different kind of fandom that comes with doing something like this.

I’m excited, though! I love it! I have to say, I like the fans. I have a career because of fans, we all have careers because of fans. We would be nowhere without them, so I’m kind of excited to go into that world. We went to Comic-Con in New York, but the show hadn’t premiered yet. We were just showing Transformers fans that there is a new cartoon coming, and it’s definitely geared more towards younger kids. It’s funnier, and it’s lighter, and it’s more about good versus evil – and how good always wins. [laughs]

We mentioned Dana Gordon earlier, and you got to come back to that role for the Entourage film. How was that?

It was great. It really felt like a reunion, because we hadn’t seen each other in like two years. And when we all got together for the table read, it was as it we had all worked together yesterday. That’s a big family that has really all grown up together. And it was so exciting – how often do you get to be on a show that becomes a movie?

I haven’t actually sen it yet, but I’ve heard from everyone who’s seen it that it’s amazingly good, and that it’s gonna give everybody what they want – the fans, the critics, everything like that. I was just so excited that Dana was in the movie.

I don’t think you could do an Entourage movie without Dana Gordon.

Thank you, I appreciate that. I did tell Doug [Ellis], when we were shooting a scene, I said ” you know what everybody wants to hear. You know the line that everybody wants me to say. We have to have it in the movie.” And he was like “yeah, alright, let’s just throw it in somewhere.” And I hope that it’s in there! Everybody just wants to hear me say “fuck you, Ari.”

That’s all everybody wants. I’ll meet people on the street and they’ll be like “just say ‘fuck you’ to me.” I’ve turned into Eddie Murphy.

Results will be available on VOD and in limited theatrical release on May 29th, from Magnolia Pictures.