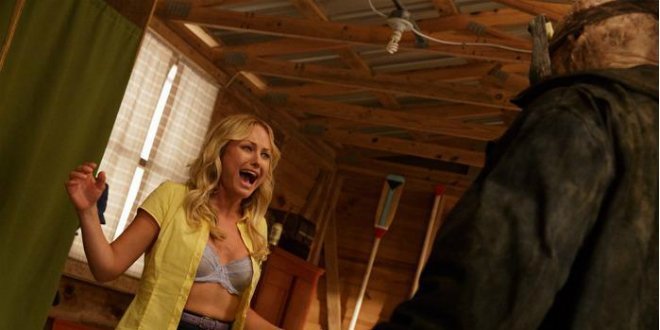 The Final Girls was one of my favorite movies from the 2015 SXSW Film Festival, and seeing it with a late-night audience at the Paramount Theater was an unforgettable experience. It’s a great mixture of spoof and tribute, with a clever premise and a talented young cast, and I can’t wait for the theatrical release so I can see it again.

Due to scheduling conflicts, we weren’t able to sit down with director Todd Strauss-Schulson during the festival, but he graciously agreed to chat with us via email about the film. I sent over a list of questions to him last week, and he sent his replies over the weekend. So let’s get right to it, shall we?

How did you get involved with this film?

I went to college with Mark Fortin, who is the co-writer of The Final Girls, and we were friends. And we both moved out to LA and would hang out. He started dating Josh Miller, who is the other writer on the movie, and we would just get dinners and shoot the shit and hang out and try to think up things to write, and watch weird art films and try to out cinephile each other.

One night Mark pitched the seedlings of The Final Girls: kids get stuck in Friday the 13th and the dead mom is the star, etc. And I was like, “that’s a great idea,” and that was the last I heard about it for a long time. And then I went off and made my first movie, and while I was editing it they sent me a draft of Final Girls, and I read it so fast, and just thought, “fuck, this is a great idea.” It was very different than it is now, but the idea was there, and I thought it was genius.

The biggest thing about it was that it broke my heart when I read it the first time. It genuinely touched me. My father had passed away weeks before I booked my first film, and so while I was off shooting it I just wished that he could have been alive to see this all come to pass. He was my best friend, and so supportive of my filmmaking, and he died right before I got my first movie. So when I read Final Girls, which is fun and horror, and meta, and all that, what really excited me was this idea of being able to see your dead parent one more time. To spend one more day with them. To talk to them, to bring them home with you – that really affected me. I understood it. I felt it all so so vividly. And I got involved.

What are your favorite horror films from the 80s?

I loved Bad Taste and Dead Alive – the latter especially. That movie knocked me on my ass when I was a kid. I also loved the Nightmare on Elm Street films, especially 3, 4, and 5, when they started hiring music video and commercial directors and they got super weird and full of imagination and insane imagery.

Did you have a list of 80s slasher tropes and clichés you wanted to make sure were included? And if so, were there any that wound up getting cut from the film – or any that you thought about, but decided to avoid altogether?

There wasn’t a list, really. But I knew that was part of the fun of the idea: not just horror tropes, but also movie tropes. Being stuck in a movie and having the movie itself function as an antagonist. Being stuck in a movie, having scenes loop every 92 minutes, being stuck in slow motion, interacting with credits, etc. That was really what I thought would be a fun game to play with an audience. There was a point, after I got involved, that there was a lot more of that meta stuff in the script, and we realized at a certain point that the balance was off. It was too clever and irreverent. It was hurting that central emotional story. It was getting in the way. So we got rid of some really fun ideas, but we had to. I wanted people to cry at the end of the movie.

Where did you shoot? Were the sets built, or did the location already have existing camp facilities?

We shot in Baton Rouge, Louisiana, which was lovely. We found this Girl Scout camp that let us have the property for a month, and that’s where we shot a majority of the movie. We designed almost the entire camp. We had a great art team led by Katie Byron, who was fearless. A decent amount of the movie takes place in this main cabin – one key sequence especially, where the kids set up a booby trap that I knew I wanted to shoot with a motion control camera.

We all felt that it had to be built and super designed in order to pull of that sequence – the camera literally wouldn’t fit in any of the pre-existing cabins. I think the crew had like seven days to build, paint, and dress that entire lodge from scratch. It was nuts. We also wanted the movie to feel kinda dreamy and hyper real, more Wizard of Oz than anything else. So beyond building the lodge, we dressed everything heavily – fake flowers, lush greens, teepees, Pendleton’s, everything was painted in our color scheme. The entire thing was super designed and controlled.

Is “Camp Bloodbath” a reference to the nickname given to Camp Crystal Lake (“Camp Blood”) in the Friday the 13th series?
Fortin and Miller, who wrote it, always said it was definitely a nod to Friday the 13‘s camp, but it was also the most inane name for a B-grade horror movie we could come up with. As a title, it doesn’t even make sense, and that somehow made it feel right. We wanted to lean into the idea that the movie the kids are trapped in isn’t a classic, since that felt like there would be so much more comedy to mine. I especially love the tagline we came up with: “KUM-BA-NOOOOO!”

Speaking of Friday the 13th, that series seems to have the most influence on this film. Was there something particular about pulling from that source – or was it just the easiest one to take shots at?

Miller and Fortin grew up watching those in particular. They always thought there was something weirdly comforting about how repetitive and predictable they were. Is it an easy target? Sure. Lots of targets to hit there. But since we were making a movie about death, Friday the 13th’s world seemed the most apt for our story: what does it mean to try to deal with and understand death in a world where death is a given, and life is totally cheap?

It felt like a fun experiment to try to make death and grief the subjects of a slasher world, rather than gore and violence. And that’s where the funny and the sad, for us, came from. That led to some decisions regarding restraint on violence and nudity.

Obviously, there are very recognizable archetypes in this film – but did you model any of your characters after specific people from 80s horror flicks? Are any of the character names or appearances particularly meaningful?

Josh and Mark always said Nancy was named for Nightmare on Elm Street, of course. And Max’s name is androgynous, a given for any Final Girl-in-training. Kurt was named for the homophobic douchebag in Heathers. It’s a bit of a soup of 80s trivia, really. The only character that was a true composite of slasher cinema’s most memorably loose gals was Tina – she was inspired by a character from Pieces, and Jodi Draigie in House on Sorority Row, who, for our money, gives the greatest (read: amazingly bad) line readings of anyone in a slasher movie ever – but Lynda Day George in Pieces gets an honorable mention.

How close is the finished product to the original script?

We spent years on the script. The movie doesn’t really resemble the original draft I read very much. But over the years Josh and Mark and I worked on it a bunch, adding in lots of the set pieces, and the meta stuff, and the comedy. By the time we were ready to shoot the script was really tight and sharp. It had to be. We were up against the clock everyday while we were shooting it, so having a really sharp, clean, tight script was a must for me. If you read the shooting script and watch the movie at this point they are almost identical except for a few jokes and improvs.

Did the success of Cabin in the Woods have any influence on the making of this film?

I do love that movie, but I never thought of Final Girls in those terms. To me I was more interested in stuff like Back to the Future, or Pleasantville, or Purple Rose of Cairo, or even All that Jazz, which is a deeply personal movie about mortality but told with a lot of pizzazz.

Are there any deleted or alternate scenes to look forward to on the eventual Blu-Ray release?

Almost everything is in the movie – even the gag reel is at the end of the movie. We had an alternate ending which could end up on the DVD, and we had a longer prologue that could make it on there as well. We have a lot of pre-viz animated videos of some of our key sequences that will hopefully be on there, so you get a window into what it took to pull off something so ambitious with our moderate budget.

And seriously – if this does well, can we expect a sequel?

I would love that! I loved making this movie, I loved our cast and crew. We were all a bunch of kids let loose at camp with very little adult supervision and, to me, it felt like we were getting away with something. With making something funny and weird and beautiful and stylish and unique. I wish I were back there shooting this everyday. It was great, I know Josh and Mark and I have some rough ideas for a sequel. So let’s just hope people turn out to see this movie and get passionate about it, so we can get back to camp!

The Final Girls is expected to be released sometime this year, but details have not been finalized.