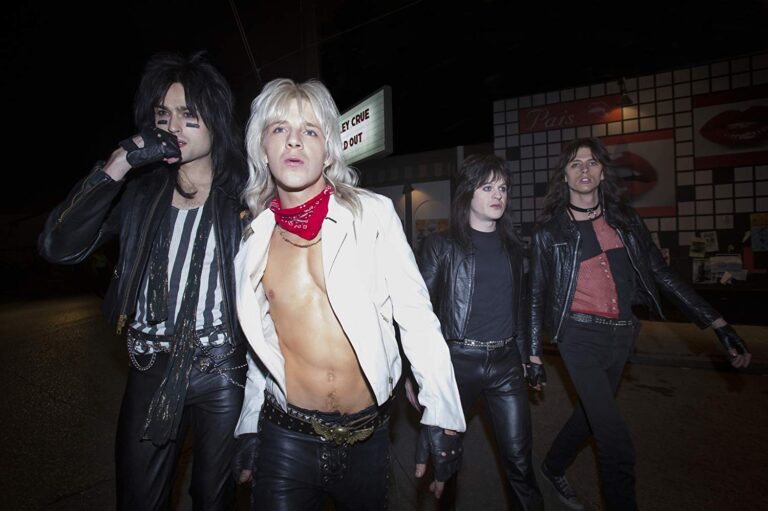 The past few years have sparked something of a resurgence in music biopics, with Hollywood tackling subjects ranging from Beach Boys genius Brian Wilson (Love and Mercy) to gangsta rappers NWA (Straight Outta Compton) to celebrated rock quartet Queen (last year’s Bohemian Rhapsody). Surprisingly, the outrageous and flamboyant hair metal bands of the 1980s have been overlooked by the genre, but that changes with the arrival of Netflix’s The Dirt, based on Mötley Crüe’s bestselling memoir of the same name.

A brief narration from bassist Nikki Sixx (Douglas Booth) welcomes us to “the worst fucking decade in human history” before plunging immediately into depravity. Within the first two minutes, Nikki lights his arm on fire, frontman Vince Neil (Daniel Webber) is shown screwing a female partygoer in the bathroom while her date pounds on the door, and a woman forcefully expels an unknown liquid from her nether regions in the midst of a crowded living room, much to the delight of drummer Tommy Lee (Colson Baker, aka rapper Machine Gun Kelly) and the horror of everyone else.

Director Jeff Tremaine, best known for helming all three of the Jackass theatrical releases, seems to regard Crüe with the same “boys will be boys” attitude that he reserved for Johnny Knoxville and his cohorts. The band were notorious for their offstage antics — trashing hotel rooms, throwing televisions out windows, snorting mountains of cocaine — and Tremaine attempts to mine as many laughs as possible from these misadventures. One infamous incident featuring Ozzy Osbourne (Tony Cavalero), a trail of ants and a puddle of urine is spectacularly disgusting, but The Dirt treats it as the absolute height of comedy.

While Tremaine doesn’t shy away from what he clearly sees as harmless mischief, the film never reckons with the reality that Mötley Crüe reveled in being mean-spirited egomaniacs, a fact plainly evident to anyone that’s actually read the biography on which the film is based. Whether or not the band was corrupted by their meteoric rise to stardom, or whether fame and fortune simply allowed them to indulge in preexisting impulses, is a subject that could be debated into oblivion, but the film comes nowhere close to asking this question. Nor does Tremaine acknowledge the rampant misogyny, especially problematic in a post #MeToo world: women are either seen as vehicles for sexual gratification or inconveniences, and nothing in between. One female character seems to exist for no other reason than to orally service band members as they sit around their favorite table at a certain club.

The Dirt spends so much time glorifying the band’s antics that it can’t handle the more harrowing aspects of Mötley Crüe’s story. Nikki’s downward spiral into heroin addiction (at one point he’s declared clinically dead), the drunken auto accident that killed Hanoi Rocks drummer Nicholas “Razzle” Dingley, and the tragic loss of Vince’s daughter should all be moments that pack an emotional wallop. Instead, they feel like afterthoughts, given little weight (despite their undeniable impact in the pages of the memoir) and only included because longtime fans will expect them to be part of the narrative.

The film’s saving grace comes in the form of its cast, with Game of Thrones alum Iwan Rheon emerging as the standout with his understated portrayal of guitarist Mick Mars. Rheon may have previously embodied one of the most diabolical villains in the history of television, but he imbues Mars with a surprising amount of humanity, especially for a character whose demeanor suggests that he hates pretty much everything and everyone. Booth is solid as Nikki, who serves as the narrator for the bulk of the film, and Baker’s pitch-perfect embodiment of Tommy is equally impressive.

Those with fond memories of the Mötley Crüe catalog will be thrilled with the inclusion of numerous hits, including “Take Me to the Top,” “Shout at the Devil,” “Home Sweet Home” and plenty more. Tremaine recreates the energy and excitement of the band’s live shows in painstaking detail, from the pyrotechnics to the outrageous costumes, and these sequences are so well-done that it almost excuses the disappointing film they’re contained within. The Dirt is recommended for die-hards, but casual fans will find little to strengthen their affinity for the Crüe.