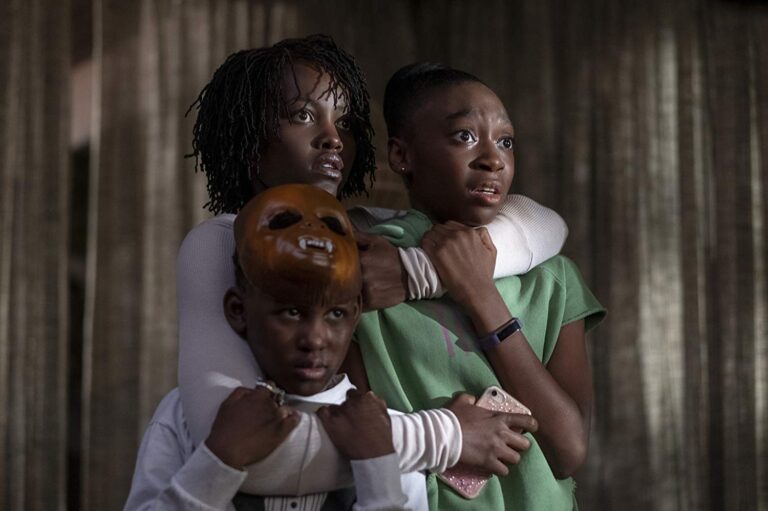 Sketch comedy star Jordan Peele shocked the world with his 2017 directorial debut Get Out, a brilliant undertaking that was equal parts thriller, comedy and social satire. The film grossed $175 million domestically and won an Oscar for Best Original Screenplay, cementing Peele as a bold new cinematic voice and setting expectations impossibly high for his follow-up.

Thankfully, Peele’s latest effort lives up to those expectations, and then some: Us is bigger, scarier and much more ambitious than his debut, with incredible moments of tension and visuals that are destined to become iconic. Spectacular performances from a fully committed cast allow the director to wield humor and horror with the expertise of a seasoned veteran, and although some elements of the film don’t work quite as well as others, you can’t help but admire the fact that Peele is swinging for the fences.

Us begins in 1986, when young Adelaide (Madison Curry) wanders away from her family on a visit to the Santa Cruz beach boardwalk. Stumbling into a funhouse maze, she encounters something so horrifying that it leaves her catatonic. Three decades later, the adult Adelaide Wilson (Lupita Nyong’o) is vacationing with her husband Gabe (Black Panther‘s Winston Duke) and their children, Zora (Shahadi Wright Joseph) and Jason (Evan Alex) when a trip to same beach triggers an inescapable feeling of unease.

As the family retreats to their cabin and settles back into normal routines — Zora fixated on her iPhone, Jason teaching himself magic tricks, and Gabe trying to romance his wife — a quartet of strangers appears in their driveway. Clad in red jumpsuits and brandishing razor-sharp shears, these trespassers clearly have something sinister in mind for the Wilson family, and you’d be forgiven for assuming Us was heading down the path of other home invasion thrillers like Funny Games or The Strangers.

But here’s where it gets interesting: these mystery assailants are exact replicas of the Wilsons, at least in terms of appearance. Gabe’s counterpart seems larger and more physically imposing, perhaps due to the permanent scowl and wild, unkempt facial hair. Zora’s twin is equipped with a devilish smile, Jason’s wears a creepy white mask over his face, and Adelaide’s wild-eyed doppelganger establishes herself as the one in charge, and seemingly the only one capable of speaking.

Not that her voice is the sort of thing you’d care to listen to. The croaking, guttural rasps sound like dry twigs and dead leaves rubbing together, and her halting, awkward manner of speech is immediately unnerving. I’ll not spoil the tale she spins for Adelaide, but the gist is this: the Wilsons are fucked. Their doubles have no intention of allowing them to live through the night, but they’re also not about to let the family go quickly and quietly, either. This event has been meticulously planned and plotted, and they’ve savoring the moment.

There’s a finite amount of horror that can be wrung from this scenario, but Peele is too creative to adhere to the formula, opting instead to let the action (and gore) spill out onto a much larger stage. Each member of the Wilson family is given multiple opportunities to face off against their malevolent mirror images, and the various setpieces that Peele manages to concoct are chock full of surprises, not to mention the occasional moment of much-needed levity (the usage of rap group NWA’s most recognizable song is a stroke of sheer comedic brilliance).

Like his previous film, Peele also uses Us as a vehicle for social commentary, with themes like wealth inequality, classism, identity, duality of the self and fear of outsiders all baked in among the requisite bloodshed. This is heady stuff, perhaps too much so for some audiences, and the more subtle nuances are likely to sail right over the heads of moviegoers hoping for nothing more than a few thrills. For those on the lookout for deeper meaning, however, there’s a significant amount to unpack by the time the credits roll.

While the entire principal cast is tasked with playing dual roles, it’s Nyong’o that truly impresses with two strikingly different performances, both full of emotional complexity. We’re rooting for Adelaide from the very beginning, but her ability to humanize Adelaide’s imposter and to make us empathize with such an outwardly monstrous character is a credit to Nyongo’s strength as an actress. Performances in genre pieces are often dismissed and disregarded, but make no mistake: Nyongo’s work in Us is some of the very best of her career.