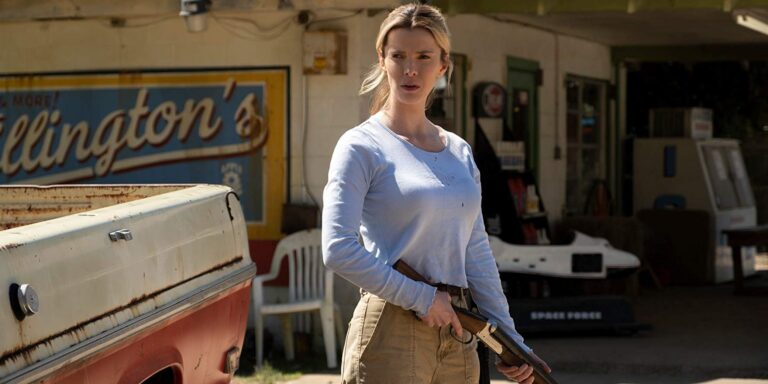 Originally scheduled to hit theaters last fall, The Hunt became mired in controversy shortly after the release of its first trailer, which featured a group of seemingly normal folks awakening in a remote location to discover another group is hunting them for sport. It’s a setup inspired by The Most Dangerous Game, but with a politically-charged twist: the hunters are wealthy “liberal elites” and their prey is a random assortment of working class folks they’ve designated as “deplorables.” The outcry from conservative pundits and right-leaning media outlets came swiftly, and even President Trump got into the fray, Tweeting “Liberal Hollywood is racist at the highest level. The movie coming out is made in order to inflame and cause chaos.”

Granted, no one had actually seen the film by this point, and all of the strongly held opinions about The Hunt were predicated solely on the content of that initial trailer, which is more than a little misleading. But that didn’t matter: people had already decided what the film was about, and in the the wake of mass shootings in El Paso and Dayton, backlash continued to grow, ultimately prompting Universal to shelve the film indefinitely. Six months later, the film resurfaced with a new marketing campaign that leaned into the controversy, displaying negative remarks on its poster like a badge of honor. Now that The Hunt is finally hitting theaters, is it worthy of the negative press it generated?

Truth be told, it’s much ado about nothing: penned by Damon Lindelof and Nick Cuse, the latest from mega-producer Jason Blum is an over-the-top satire that lampoons both sides of the political spectrum, playing up stereotypes and misconceptions to their most absurd levels. Led by a mysterious benefactor named Athena (Hilary Swank), the hunters are smarmy, ultra-rich, virtue-signaling assholes, patting themselves on the back for achieving the ultimate level of wokeness. Meanwhile, the “deplorables” caught in their crosshairs are comprised of climate change deniers, firearm enthusiasts and conspiracy theorist podcasters ranting about “crisis actors” and “the globalist cucks who run the Deep State.” It’s all ridiculously silly.

The Hunt is violent, to be sure, but the mayhem is presented in a cartoonish, wildly overblown Evil Dead 2 sort of way. Bodies begin to stack up very quickly, with at least a half dozen casualties in the first 30 minutes as director Craig Zobel introduces us to multiple characters that we assume will be important, only to have them blown up, dismembered, or impaled moments later. When we finally zero in on Crystal (Betty Gilpin), a stone-faced badass from Mississippi whose survival skills are remarkably well refined for someone who works the counter at a rental car company, more than half of the hunted have already been wiped off the map in gruesome fashion.

That Crystal will eventually slaughter her way to Athena’s doorstep for a final showdown is a foregone conclusion, but the journey is not without its surprises, mostly thanks to Gilpin’s delightfully eccentric performance. Crystal rarely cracks a smile, but she’s prone to gleefully deadpan remarks, delivered in a slow southern drawl that borders on monotone. She’s also eerily calm in the face of conflict, like some kind of bayou-bred zen master, dispatching foes at point-blank range with the tranquility of someone pouring a cup of coffee, or self-cauterizing a wound as though it’s no more strenuous than thumbing through a magazine. The climactic battle between Crystal and Athena is an incredible bit of action choreography, a brutal close-quarters brawl that showcases tremendous work from Gilpin and Swank, punctuated by conversations about grilled cheese and George Orwell.

At one point, Crystal accuses Athena of not actually caring about the truth, to which the latter replies “I do, but I know I’m right.” She’s not, of course, and there’s an argument to be made that The Hunt is trying to say something deeper about the dangers of clinging to ideology when it’s disputed by evidence and facts. Then again, maybe Lindelof and Cuse are just trying to illustrate that being a closed-minded, self-righteous asshole is not a trait unique to one particular side of the political divide. Whether or not audiences derive an actual message from The Hunt is anyone’s guess, but I appreciate the film’s willingness to call both sides out on their nonsense.