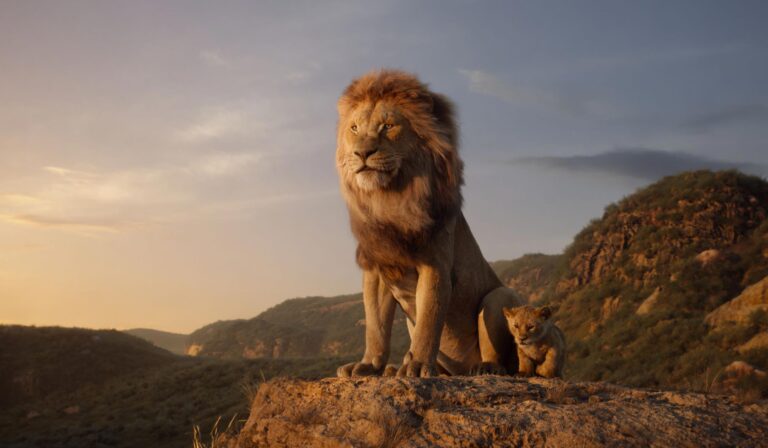 25 years after the release of The Lion King, one of the most successful animated films of all time and arguably the pinnacle of the “Disney renaissance” period, the studio is employing the same technology used for 2016’s The Jungle Book to revisit this story with stunningly lifelike visuals. To call this a “live action” remake would be a misnomer, as the entirety of the film has been created through artificial means, but the artistry on display is so impressive you’d be forgiven for assuming the studio had dispatched a team of wildlife photographers to capture footage on the African plains.

The story beats are identical to the animated version: Mufasa (voiced by James Earl Jones), king of a vast empire known as the Pride Lands, welcomes into the world a son named Simba (JD McCrary), who will eventually ascend to the throne. This doesn’t sit well with Mufasa’s younger brother, Scar (Chiwetel Ejiofor), who plots to eliminate the young prince to ensure he remains next in the line of succession.

Directed by Jon Favreau, this update of The Lion King hews so closely to the original version that it’s practically a shot-for-shot remake. In some respects this can be thrilling, such as the “Circle of Life” sequence that opens the film, and viewers with even the faintest attachment to the animated version are likely to be astounded at seeing one of the most iconic Disney moments recreated with such painstakingly vivid detail. To further evoke nostalgia, it appears Favreau repurposed the tribal chanting from the original soundtrack for this sequence, although the lead vocalist is clearly a new recording.

Elsewhere, the film’s determination to mirror its predecessor so closely is to its detriment. There’s a certain amount of freedom in animation, where exaggerated features and physical impossibilities create a particular sense of personality for the characters and the world they inhabit. But when your story takes place in a world meant to resemble our own, with lifelike animals bound by the laws of physics, much of that personality can be lost in translation. This is especially evident during musical numbers like “Can’t Wait to Be King” and especially the truncated “Be Prepared,” — both feel nothing short of forced, inserted only to appease fans that would have protested their removal.

The return of James Earl Jones to the role of Mufasa was a cause for celebration while The Lion King was in production, but the end result is something of a mixed bag. Jones is mostly tasked with regurgitating the same lines from the 1994 version, which only makes it natural to compare the two performances — and for the most part, there was more emotion and more gravitas in the original film than what Jones delivers here. But there are a handful of moments that he positively nails, particularly his gentle admonishments of Simba and his lessons on being a noble and just monarch. “While others search for what they can take, a true king searches for what he can give.”

That Jeremy Irons wasn’t asked to reprise the role of Scar has caused a bit of grumbling among some sections of the Disney fandom, but Chiwetel Ejiofor is unsurprisingly stellar with his take on the character. There’s no humor or levity in Ejiofor’s performance — just frustration and envy and bitterness — and combined with Scar’s gaunt frame and scruffy features, he comes across as significantly more menacing and villainous. Much like Idris Elba’s portrayal of Shere Khan in The Jungle Book, Scar is legitimately scary.

The Lion King receives a jolt of energy around the midway point, precisely at the moment Billy Eichner and Seth Rogen arrive (as Timon and Pumbaa, respectively). While the majority of the dialogue in the film is exactly the same as the animated version (for better or worse), Eichner and Rogen were clearly given a tremendous amount of improvisational freedom in the recording booth. This not only results in the film’s biggest laughs, but also makes the characters feel more genuine, and it’s a shame these same courtesies weren’t extended to the rest of the cast, because the film instantly feels more alive whenever Timon and Pumbaa are around.

Donald Glover and Beyonce Knowles-Carter acquit themselves nicely as the adult Simba and Nala, and their duet on “Can You Feel the Love Tonight” is positively aces. Beyonce’s other contribution to the soundtrack, the original song “Spirit,” is a solid addition and smartly utilized to build toward Simba’s eventual return to the Pride Lands. It’s unfortunate that we aren’t allowed a bit more time with these characters, though, because everything about their reunion feels rushed, and there are certainly other moments in the film that could have been trimmed down to allow more breathing room for Simba and Nala.

A project as ambitious as The Lion King is bounds to have flaws, and most of them are borne from its strict adherence to the previous film. The incredibly realistic visuals never cease to be impressive, and if you played the footage alongside an episode of Planet Earth II you’d be hard-pressed to distinguish between the two, but the film’s emotional beats rely almost solely on the audience’s familiarity with — and affection for — the original film. I’ll readily admit that I was moved to tears on three separate occasions, but to be fair, watching the animated version elicits the same response during those same moments, so it’s difficult to credit the remake with inducing those emotions.

There’s no denying that Favreau and his team have crafted a brilliant technological achievement, an undeniable visual masterpiece, but whether The Lion King is a great film on its own merits is a subject that will likely inspire a fair amount of debate. Indisputable, however, is that Disney will no doubt have another box office smash on its hands when the film opens next weekend.