Tribeca 2021 Review: My Heart Can’t Beat Unless You Tell it To 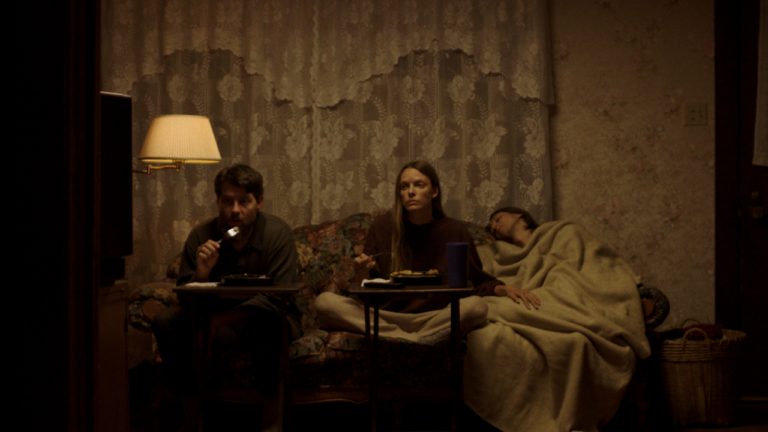 In a forgotten rural town, Dwight (Patrick Fugit) and his sister Jessie (Ingrid Sophie Schram) care for their younger brother Thomas (Owen Campbell), a frail thing perpetually swaddled in a blanket who can barely muster the energy to walk from one room to the next. Thomas suffers from a mysterious illness the film never explicitly names, but when we learn that he never goes outside, is awake during the wee hours of the morning and feeds exclusively on human blood, it’s not exactly difficult to piece together the nature of his affliction.

My Heart Can’t Beat Unless You Tell it To provides virtually no backstory — we don’t know the origin of Thomas’ condition, nor the whereabouts of the trio’s parents — but the characters are so fully realized that we’re instantly drawn into their world.The boy’s supply of nutrients comes primarily from Dwight, who goes out at night to pick up vagrants, dispatch them and drain their blood before disposing of the bodies. This pattern has clearly been going on for some time, and the weight of Dwight’s actions, necessary though they are, is becoming almost impossible to bear. “We shouldn’t be doing the things we’re doing,” he tells Jessie, who shrugs off her brother’s concern.

Both Dwight and Thomas are desperate for human interaction apart from their own household; Dwight frequently visits a local prostitute and tries to convince her to run away with him, while Thomas longs to befriend the neighborhood children he often hears outside his bedroom window. Dalliances with the rest of the world are forbidden, and Jessie bristles at the notion that either of her brothers would dare break the rules, leading to a series of arguments, outbursts and betrayals with horrific consequences.

Written and directed by Jonathan Cuartas, My Heart Can’t Beat Unless You Tell it To steers well clear of genre tropes, preferring instead to hone in on the relationships and family drama at the core of its narrative. Campbell’s childlike portrayal of Thomas has a haunting, almost ethereal quality, and Fugit conveys the inner torment of a man bound by duty to his family but guilt-ridden over his actions. The film’s somber tone and deliberate pacing are reminiscent of Let the Right One In, but the events depicted here feel weightier and more tragic, despite the former being a better film overall. Some horror aficionados may find it lacking in scares, but pathos and poignancy are in ample supply, and it’s a solid debut feature for Cuartas.