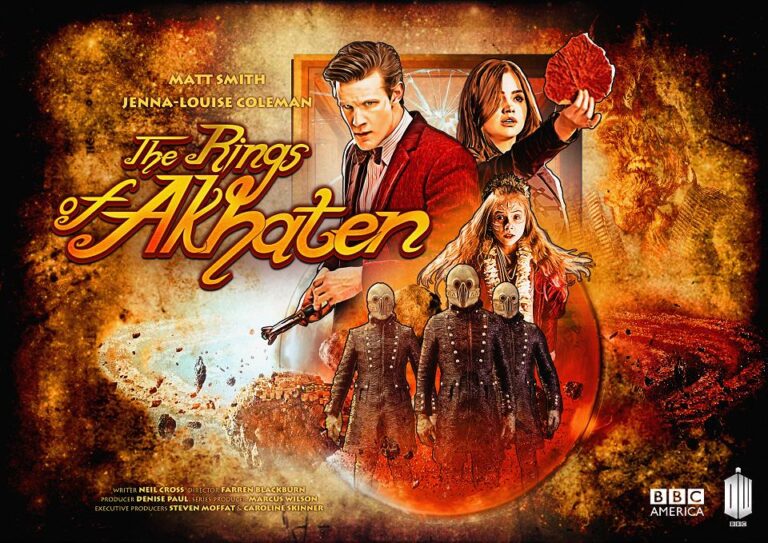 This week Doctor Who returns to hard sci-fi (yes, that’s a Party Down reference) with The Rings of Akhaten, a sometimes silly but heartfelt romp that continues the mystery while letting The Doctor and Clara have their first official adventure in The TARDIS. Clara wants to see something “awesome” so off they go to the Rings of Akhaten, where a society of multiple aliens thrives and trades.

While visiting a market that looks like the Mos Eisley cantina on steroids, Clara runs into the young “Queen of Years” Merry Galel (Emilia Jones) and finds her nanny/governess skills kicking back in as she decides to care for her while on the run from an ancient ritual that threatens their very existence.

The Rings of Akhaten marks the debut of writer Neil Cross, best known for his work on the multi-award-winning BBC crime thriller Luther, and he seems to have a good handle on the characters, infusing a nice bit of humor along with some strong emotional scenes near the end that are only matched by the striking visuals associated with them. There’s a feast for the eyes in this episode, from the countless creatures in the market to the epic cosmic showdown during the conclusion. There are a few clunky looking scenes here and there that seem to be the plague of sci-fi shows on television these days, but the good far outweighs the bad in this episode.

The intro and callbacks toThe Bells of Saint John throughout the episode are excellent and add some nice continuity to the puzzle that is Clara, and the audience should be increasingly intrigued, as is The Doctor. Matt Smith also has another one of those fantastic monologues that will give goosebumps and maybe leave a few viewers feeling a tad verklempt.

While this is one of the weirder episodes that Doctor Who offers, it never loses focus on what makes the show work: Matt and Jenna. They sell everything with gusto and therefore the audience buys in, making the absurdity of what is going on around them inconsequential. Series 7b has been a whole lot of fun so far and The Rings of Akhaten keeps the momentum of the premiere going strong, leading into next week’s trapped in a submarine episode Cold War.

One or two really bad visual effects. A couple of silly moments in the market. The vagueness of how the villain is defeated.

Another extremely entertaining adventure for Series 7. Its unexpectedly emotional and full of beautiful moments in what seemed to be an over the top cosmic heavy sci-fi episode but ends up being much more fulfilling.