TV Review: ‘Tales from the Loop’ 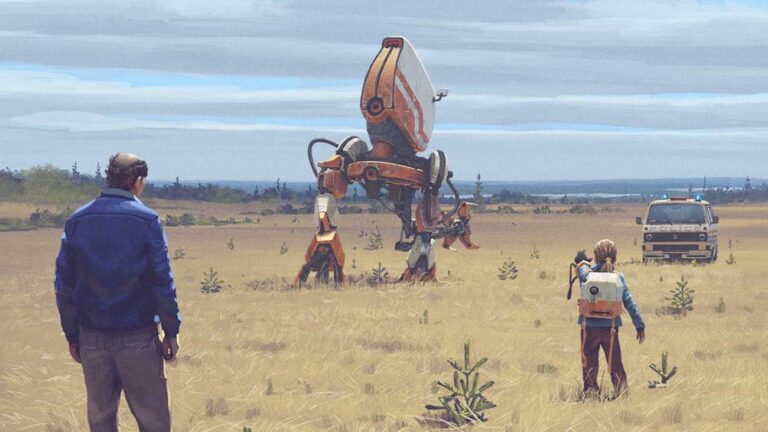 Amazon Prime Video’s new anthology series Tales from the Loop has the DNA of a stunning “used universe” of sci-fi imagery and small scale personal stories of love, loneliness and loss to create semi-interwoven tales of quiet humanity. From executive producer Matt Reeves and based on the acclaimed art of Swedish artist Simon Stålenhag, the series requires a level of patience, but should win over some sci-fi hearts and minds with its intimately personal tales and overall exquisite artistry.

Amazon was kind of enough to provide us with three episodes (of the overall eight) that they felt best suited the kind of stories and tone the series was trying to convey. While all the stories can somewhat be viewed as stand-alones, the series explores the inhabitants of a town that lives and works above and within “The Loop,” a mysterious sci-fi macguffin machine built to access and explore all different kinds of time and space.

First of those provided to us is Episode 1, titled Loop, which introduces us to Jonathan Pryce’s Russ, a minor character and narrator for this particular episode, whom doesn’t return to the narrator work for the other two episodes provided. Russ’ family is central to “The Loop” and many of the stories hover around himself or members of his family in the town within the anthology.

Loop might not be the best of the collection provided, but is certainly the most interesting and establishes the world that will be the sandbox going forward. In it, a young girl (Abby Ryder Fortson) returns home to find her entire house, including her mom, have vanished into thin air. Characters within like Loretta (Rebecca Hall) begin to emerge as important central figures to the small bit of overlying continuity going on between each tale. The direction the slow-burn episode eventually goes to is fairly predictable, but it still has great individual character moments and interesting seeds planted for the series.

While the first episode is a bit more of a twisty sci-fi mystery, the next one provided is Episode 4, titled Echo Sphere, bringing an emotional gut punch of a story that highlights coping with the ideas surrounding our own mortality and showcases Jonathan Pryce’s exceptional acting talent. The character of Russ is front and center in this one as he is diagnosed with a terminally ill disease. The episode reveals a surprisingly human and heartbreakingly regular existence compared to the small glimpses given of him in Loop. While the subtle vibe of the ending is one of the natural circle of life, the episode doesn’t sugarcoat any kind of superficial happy ending. The overall experience of this story feels very real and is at times tough to watch – bring a box of tissues.

Episode 6, titled Parallel, is the final one provided and essentially the most satisfying of the collection — as well as my personal favorite. Ato Essandoh is fantastic in dual roles as a security guard that finds himself unwittingly sent to a parallel world. There he meets his doppelganger that just so happens to have the life and love for which he’d always dreamed. This episode has its tough emotional moments too, but the reflective and thoughtful way the story stays with its small themes of longing and relationship envy are poignantly explored and closes with the largest feeling of hope yet.

Bingers take note though — Tales from the Loop isn’t about exploring multiverse ideas or largely exciting sci-fi tropes, it’s purely about small human stories with a mild sci-fi backdrop. Disappointingly, the robots and technology inspired by the Stålenhag’s work are also merely set dressing in the episodes viewed, despite being one of the most intriguing elements of the marketing. While very contemplative and poised, the series also doesn’t have that one moment that elevates it above good to greatness judging by what was presented.

Despite those issues, everything in Tales from the Loop is presented with the highest quality, including the melancholy and beautiful score by Paul Leonard-Morgan and Philip Glass alongside the tremendous performances from each cast member. It’s difficult to say if the series works as a whole, not having seen the final episodes. Story finality with “The Loop” itself might make the journey more gratifying, but the sum of its parts that were made available are only pretty good, occasionally flirting with its missed greater potential.