TV Review: ‘Under the Dome’ – “Heads Will Roll″ 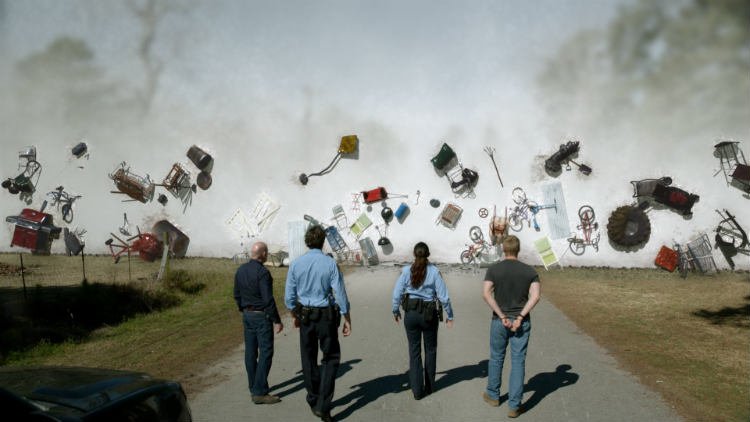 Under the Dome is back for its second season premiere, Heads Will Roll, penned by Stephen King himself, and those heads certainly do get to rolling – metaphorically speaking, just not quite in the way you might expect. My review will be spoiler free though, with the exception of anything in the official episode description, so feel free to read on and you won’t have any of the twists ruined for you.

When last we left Chester’s Mill our “hero” (heavy on the quotation marks) Dale “Barbie” Barbara (Mike Vogel) was facing a good ol’ fashioned hangin’ in the town square with Big Jim (Dean Norris) and Junior (Alexander Koch) ready to pull the lever. Simultaneously, the Dome has become magnetized, wreaking havoc across the town and creating some fun (and sometimes unintentionally hilarious) scenarios. Kind of what the show is good at, right?

Meanwhile, a mysterious new stranger named Sam Verdeaux (new cast member Eddie Cahill) helps Julia (Rachelle Lefevre) rescue a young gal that appeared, apparently out of nowhere, in the middle of the lake. But soon after the magnetized power of the Dome continues to increase, everyone in town finds themselves in various types of unexpected dangers, leaving no one safe.

That last aspect is one of the best things about Heads Will Roll, which left me questioning many times just who was going to get out of this one alive. Stephen King was definitely having fun teasing the show’s viewers with many fake-out deaths. There wasn’t anything quite as fun as the Dome destruction in the pilot episode, but the sequences resulting from the magnetism did provide some silly action and suspense. Also, the on-location shooting in Wilmington, NC still really adds a bright and beautiful backdrop to the surreal ongoings in Chester’s Mill.

In addition to the already mentioned Sam Verdeaux, we get introduced to local teacher Rebecca Pine (Karla Crome), who becomes involved in an extremely ludicrous attempt to counteract the Dome. Both characters seem lightly setup to be thorns in the side of Barbie and Julia’s budding romance.

Sam’s involvement and connection to the story comes into spoiler territory, but Cahill is likable and creepy at the same time, making it tough to place just what his role will be. Meanwhile, Rebecca doesn’t fare quite as well with her goofier attempt to defeat the Dome, but Crome does the best with what she has to work with and could be a fun, nerdier character if written right.

If you plan on tuning in to get some big answers to the show’s developing mysteries, don’t get your hopes up. Heads Will Roll only adds to the head-scratching enigma, while shuffling the cast around a bit. Probably one of the most talked about aspects of the episode will be what happens to Junior as a result of the magnetism and the implications it might have going forward for him and the town. But as one would expect, Stephen King saves the biggest for last and leaves a cliffhanger that is both a perfect scene for him to write, and totally out-of-nowhere crazy. Not everybody makes it out of the episode folks.

Under the Dome has not magically become Shakespeare during the season break, but there’s still something very irresistible about this completely ridiculous show. Part of it harkens back a bit to my nostalgia for Lost and all the potential and intrigue it had in its early seasons, but this show isn’t nearly as good. Head Will Roll is more of what you’ve come to expect from it though, and if you’ve enjoyed the road so far, this guilty pleasure should still satisfy your summer TV craving.