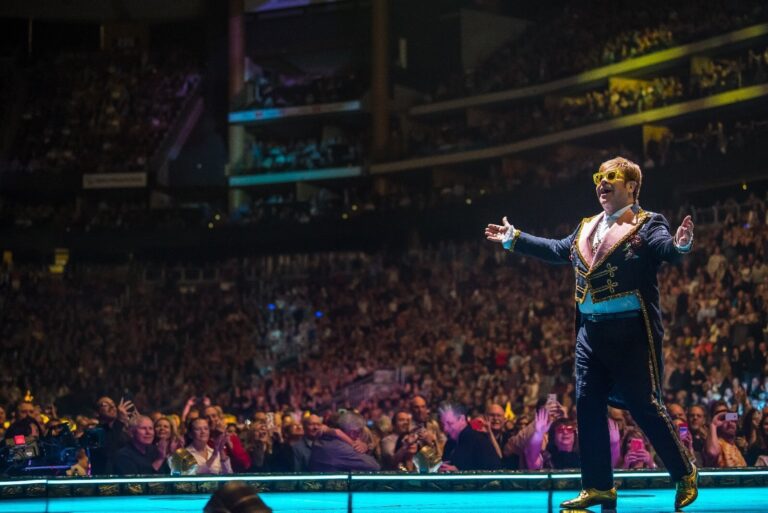 GLENDALE — After five decades of live performances, Elton John is hanging up his sequined jackets and oversized sunglasses, but not before making one final lap around the world. The “Farewell Yellow Brick Road” tour brought the iconic singer to Arizona’s Gila River Arena last night for a rollicking three-hour show, with John’s powerful voice complemented by a stunning visual display.

Comprised mostly of selections from John’s prolific output in the early 1970s, the evening kicked off promptly at 8:00pm as he strode onto the stage amid a thunderous ovation. Leading with “Bennie and the Jets,” John showcased an energy and zeal that belied his 71 years of age, proving that his talent and charisma have only grown stronger with age.

An Elton John performance could scarcely be complete without a wardrobe change or two, and when the singer emerged for his encore clad in a green silk robe and heart-shaped glasses, the crowd roared their approval. His voice remained powerful for the entire duration of the show, and although many of the songs were sung in a lower key to avoid those troublesome high notes, fans were no doubt left with the impression that John could’ve played another three hours without breaking a sweat.

The setlist was stuffed to the gills with nearly every hit song one might expect, such as “Rocket Man,” “Tiny Dancer” and “I’m Still Standing.” But John also catered to the die-hards, making room for deeper cuts like “Daniel” and “Indian Sunset,” and repeatedly gave thanks to his longtime collaborator, Bernie Taupin, with whom he’s been cowriting songs for more than 50 years.

But the gratitude wasn’t just reserved for his writing partner, nor longtime bandmates Nigel Olsson and Ray Cooper (although he praised them as well). Sir Elton has always been especially gracious to the audience, and last night’s show was no different as he paused to acknowledge his dedicated fans. “You bought the albums, the eight-tracks, the cassettes, the CDs, the merchandise, but most importantly you bought the tickets to the show,” he said. “I would like to say thank you for all those wonderful years of kindness, loyalty, love, and support you have thrown my way.”

Perhaps most deserving of thanks is John himself, having produced a staggering amount of material over the past fifty years that has meant so much to so many people — and that’s not even accounting for his charitable contributions and other philanthropic efforts. Not only is John one of the greatest musicians of all time, but he might just be one of the greatest humans, too.

Setlist
Bennie and the Jets
All the Girls Love Alice
I Guess That’s Why They Call It the Blues
Border Song
Tiny Dancer
Philadelphia Freedom
Indian Sunset
Rocket Man (I Think It’s Going to Be a Long, Long Time)
Take Me to the Pilot
Someone Saved My Life Tonight
Levon
Candle in the Wind
Funeral for a Friend/Love Lies Bleeding
Burn Down the Mission
Believe
Daniel
Sad Songs (Say So Much)
Don’t Let the Sun Go Down on Me
The Bitch Is Back
I’m Still Standing
Crocodile Rock
Saturday Night’s Alright for Fighting