INTERVIEW – Joss Whedon and Clark Gregg suit up for ‘Marvel’s Agents of S.H.I.E.L.D.’. 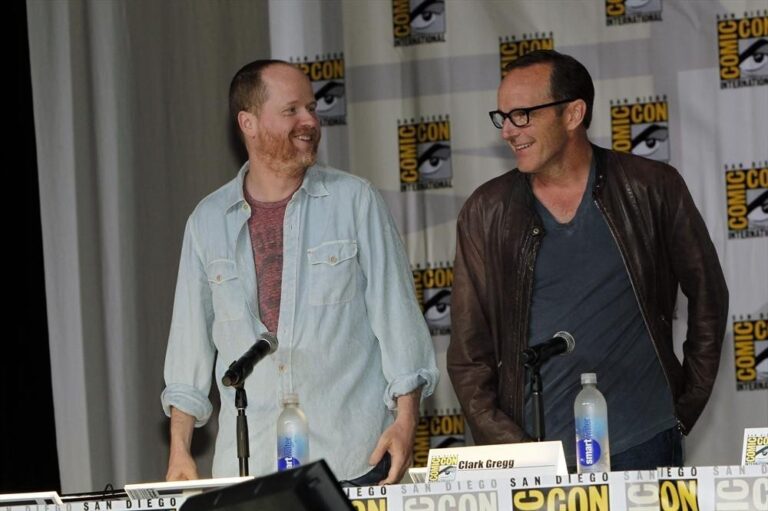 What do you get when you mix a rabid fanboy audience, the 3rd highest grossing film of all time, fan favorite character Agent Coulson and nerd mastermind Joss Whedon? You get the biggest and most anticipated show of the 2013 Fall TV season in Marvel’s Agents of S.H.I.E.L.D.

This past July at San Diego Comic-Con, ABC was gracious enough to let me take part in the press room for the show, where I got to speak with the cast and creative team behind Marvel’s first foray into live-action TV. With the premiere coming this Tuesday, September 24th on ABC, it seemed like the perfect time to share with our readers all they had to say.

We’ll start our first of multiple interview pieces from Marvel’s Agents of S.H.I.E.L.D. with the names fans already know and love – the always hilarious Joss Whedon and Agent Coulson himself, Clark Gregg.

How much of what happens in the Marvel cinematic universe is going to affect the world of Agents of S.H.I.E.L.D.?

Joss Whedon: The whole show is kind of based on the change in the world that happened in The Avengers. Now everybody knows, so when something really important happens anywhere in the Marvel universe, we will have to take that into account. Ultimately we’ll dodge it a little bit because, you know, we’ll be up in our air place… solving problems. There will still be a Marvel Universe, there will still be a S.H.I.E.L.D. But you know, if there is a big change we are part of the Marvel cinematic universe. We might be the mascot, but we’re part of the team.

Is there a road map for the show on where events and characters are heading long-term?

Joss Whedon: Yeah, we always have a road map for the show itself and we know release dates for all the movies and what happens in all the movies… and here’s how it goes! First Thor… No, we try mostly to stay out of the way because trying to get too intricate becomes a dance… what if we get pre-empted and they push the episodes a week? It’s tricky. But being able to throw a little something in there and for everything to feel like it’s part of the same big story is exciting. We’re not going to pass up that opportunity totally. We’re just not going to build off it.

Coulson Lives! as the internet tagline says, so how does it feel to escape the infamous “beloved character deaths” that Joss has become know for?

Clark Gregg: Listen, there are a few actors from the “Whedon-verse” that are not happy with me.

Do you and your fellow actors fear similar fates on this series?

Clark Gregg: In the “Whedon-verse” you can never count out that degree of the macabre, people being cashed in. This is a world where people are vulnerable so I don’t think anyone is safe, including Agent Coulson.

That said, it’s a hopeful show, an optimistic world. What’s fun about this to me is, and what I’ve always loved about the comics and about sci-fi is, there is a way you can tell a story in an imaginative universe that you can’t in strict realism. That we can take who we are right now and project it forward a little bit or put a slight spin on it to make us look at who we are through a lens that’s more real than real.

TV feels like the perfect serialized version of that, so to see the first couple of scripts and see the way that they’ve found the thing that’s bigger than anything I’ve seen on TV and yet really the people from that world, the thing people responded to in Phil Coulson, the humans  – to see the humans of that world represented is really exciting to me.

Normally big government or corporate agencies are the bad guy types in your stories, so what was it like writing S.H.I.E.LD., a big government agency, as the heroes this time?

At times did you feel any irony that now you’re working with ABC, a Disney owned network viewed by some as one of those big corporate entities?

[pullquote_left]They’re never going to say “Don’t say a mean thing about corporations” because they know that part of storytelling is about rebellion.[/pullquote_left]Joss Whedon: [in a British lady’s voice] “I’m sure I have nooo comment what so ever!” [pantomimes smashing mics] Smash, smash smash! Yeah, but that’s always the case. I remember Eliza Dushku turning to me on the set of Dollhouse and going “Are we part of an evil empire?” and I said “Yes sweetie, we’re running the daycare on The Death Star.”

Not that I think Disney is evil. We have a responsibility to them. They pay for everything we do, but I’m also very excited by what we’re able to do, what they are letting us do. They’re never going to say “Don’t say a mean thing about corporations” because they know that part of storytelling is about rebellion.

What can you say about why Agent Coulson is now recruiting regular humans and not superheros like he was doing with The Avengers?

Clark Gregg: Well, I think the Avengers have been recruited and I don’t know, I think we’d have to talk to Director Fury about why he’s now tasked him to do this but I think it’s clear he sends Coulson to the hottest zones he’s got. We’re in a a world after The Avengers where people have gone from knowing about Tony Stark, and The Hulk for a moment before he was contained, to a world with a wormhole and alien invaders in New York and these guys from Asgard who are trouble. A lot of people want in on that action. Some of them aren’t very nice. That said, I think it’s a vehicle for dealing with other new superheroes from the Marvel universe sometimes, but all kinds of old and new S.H.I.E.L.D. business.

Can we expect some hurt feelings and extreme reactions from characters upon learning of Coulson’s return/resurrection or whatever his situation turns out to be?

[pullquote_right]Obviously there are some Avengers, and Pepper Potts, that are going to be really upset and feel manipulated.[/pullquote_right]Clark Gregg: One thing that I really enjoy about playing this guy and being in this world is that Marvel are like grandmasters of chess. There are an infinite number of possibilities of the way the pieces can get moved and as a fan I look and I think, whether it involves my character or not, I really hope they exploit that spectacular opening.

So far they just, I think the reason people are going to see these movies is not because people have an endless thirst for superheroes but have an endless thirst for a developing story where they keep taking the coolest possible opportunities. Obviously, there are some Avengers, and Pepper Potts, that are going to be really upset and feel manipulated. I don’t know if when they find out everything they’ll still feel that way. I don’t know.

What’s it like getting to flesh out the character of Agent Coulson and will audiences learn more about his backstory since very little is known?

Clark Gregg: Every movie I’ve done I’ve learned a little bit more. They had me in Iron Man 2 saying “Oh, I’ve gotta go. I’m going to New Mexico” and at the end [of filming] I asked “What’s in New Mexico?” and they said “Nobody told you? It’s Thor! The hammer’s there! You’re gonna find the… guess what is the post-credits thing in this movie!” That’s how I find stuff out. It’s a chain letter that I’m always happiest to read because then I get to act it. So far the two episodes of S.H.I.E.L.D., each one of them I’ve learned something more about Phil Coulson.

There’s been a painful trend of your shows being cancelled before their time, so do you have concerns coming back to network TV after your success on the big screen?

Joss Whedon: You know, it did hurt. I’m not going to lie. But you know there’s no free ride. We’ve gone through all the hoops to make this work and the network has dealt with us like they would with any show. Only difference is they really knew what we were giving them and what they wanted. So during the process we’ve had a real feeling of support as opposed to a feeling of “Wha?” as what I had on my last two.

What do you think makes the fan love of Agent Coulson so strong?

I really think the show and the response and the “Coulson Lives!” thing is really because Joss took what was there already instinctively and turned it into this thing that revealed what was really there – that he was a fanboy and that he had a ridiculous embarrassing man-crush on Captain America. I think that’s really what made this whole thing happen.

Comic-Con 2017: Greg Cipes on Beast Boy in ‘The Night Begins to Shine’ Event