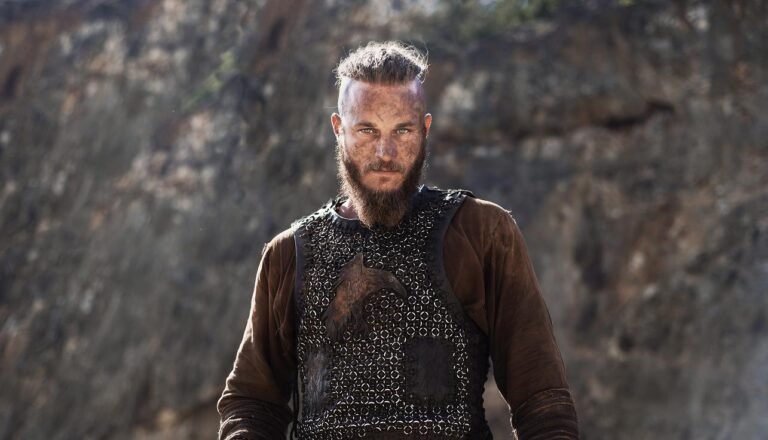 In the last of our series of interviews leading up to the Season Two premiere of History’s Vikings, I spoke to Ragnar himself, Travis Fimmel via conference call, and the somewhat shy Australian, now living in Ireland, gave us the lowdown on what’s to come in the season premiere and beyond for Ragnar and his complicated family. Here are some of the highlights, and beware some mild spoilers below:

How hard was it to get back into the character of Ragnar for Season Two, after having been away during your break?

On any job, the first week you feel like you’ve done the worst job in the world. You always want to reshoot the first week of work on any job, because you sort of haven’t really got into it yet. We know everybody on set, we work with a couple of the same directors, we’re all friends. It’s a very friendly set, so it’s not too hard to get into it. The sets and the costumes are so good that they really help put you in that world again.

Was it difficult to say goodbye to Nathan O’Toole who played Ragnar’s son Bjorn, since he’s being replaced by an older actor?

Oh, we all love Nathan. We all love him. He’s such a great little actor. Local Irish guy. I was very sad to see him leave but I think it was a great opportunity for an up and coming young actor to be on the show. But Alexander [Ludgwig] is fantastic too. He [Nathan] was very well replaced. We all miss Nathan a lot, but Alex does a tremendous rendition and he’s a big big boy. He [Bjorn] grows quick in four years.

Did you have any fun experiences doing the combat scenes this season, especially with George Blagden (Athelstan) getting to take part for the first time?

George does a great job this season, he was so excited to do some fighting stuff. He does a really great job. It’s a big part of the show, the fighting. I’m getting too old to do it. [laughs] I’m happy for other people to do my side of the fighting, you know. I try to avoid it, I’m a bit lazy to do that stuff. It’s better than trying to remember lines though!

Vikings has had some fantastic guest stars, including Gabriel Byrne in Season One and Donal Logue in both Season One and Two, so are they any actors on your wishlist to have on the show?

That’s a good question, mate. Of course I loved and it’s great that Donal Logue and Gabriel Byrne were on. I’d love to have some more characters like that. I respect so many actors, mate. I’d love to have… shit, I don’t know, but I hope they bring in some new guys! There are new guys actually, King [Ecbert] this year, Linus [Roach] is fantastic in the role and it’s great doing scenes with him and I hope I get to do some more scenes with him.

Does the cast and crew treat you any differently since you’re the leader on-camera, and do you all ever go out in full Viking costumes and have some Grog?

Oh, we all get on very well, mate. I don’t let anyone treat me any differently. It’s great crews out there and we all make fun of each other. I actually live in the country right next to one of the sets on one of the lakes, everybody else lives in town. I drink with the locals. They all lived in town, the other actors. But I drink with the locals and a lot of the crew. We work about an hour south of Dublin and I don’t want to travel in the car for two hours everyday.

Ragnar has very different relationships with Lagertha and Aslaug. How is this triangle going to play out over the season?

Both relationships developed in a different way. Aslaug, played by Alyssa Sutherland, she is a tremendous actress. She does an amazing job this year and Ragnar really falls in love with her and Lagertha seems to be chasing a bit more power. She wants to be an Earl. It’s not about our community. She’s had a bit of a taste of power and it’s more about that now. Aslaug is all about our family and taking care of our four kids.

What’s it like working on the full-sized boats? The show is on The History Channel, so how accurate are they?

We had a lot of tremendous fun on the boats, this year we got out on the ocean and it’s just beautiful, beautiful land. The boat stuff is very enjoyable and they’re made to scale from what the Historians believe. They were built, I think, in Eastern Europe somewhere. They definitely float and they definitely work and definitely sail. It’s a lot more fun that sitting at the table doing a scene talking to someone.

I think Ragnar never wanted to be an Earl, he just wanted the opportunity to go West. As it happened, the only way that he could do it easily was becoming an Earl. It’s not that he wanted the power or any of that stuff. He’s like me, I hate talking in front of people. He doesn’t want to get up and talk to the room full of people and that sort of stuff. He doesn’t want to be the judge of people. He just wants to sail West and find lands that are better for his people. It’s not about becoming Earl, Earldom gave him the chance to have control of the boats.

There’s a scene in the Season Two premiere that has some humor in it from Ragnar. Will we get to see more of that from him this season?

Mate, I hope so. I’ll always do it, but it’s not up to me what they put in. It was fun to do that stuff and it was a lot longer too. They cut out of lot of my stuff that they could have left in. I hope so, mate, because every good drama has to have some humor for sure. But you can only act in it, you don’t know what the editors are going to put in, it’s not up to me. But I’m with you. I think humor should be in everything.

Do you keep your Viking hair year round or is it something you’re eager to get rid of when filming ends?

Both years I had extensions. The first year, my hair was only like an inch, then they put extensions on that. But yeah, it’s pretty embarrassing to have to shower with a shower cap on everyday so that it doesn’t fall out.

After all they’ve been through, what can we expect from Ragnar and Rollo’s relationship in Season Two?

It’s going to be pretty hard to ever trust Rollo again. But he’s blood, and the most important thing to Ragnar is his family and his blood. He certainly has a lot to overcome with Rollo, but they have a good arc this season, the two brothers. A lot different from last season. I think the audience will really enjoy the relationship this year.