PHOTOS: Sleeping with Sirens, Circa Survive and Sum 41 sweat it out for Rockstar Disrupt Festival 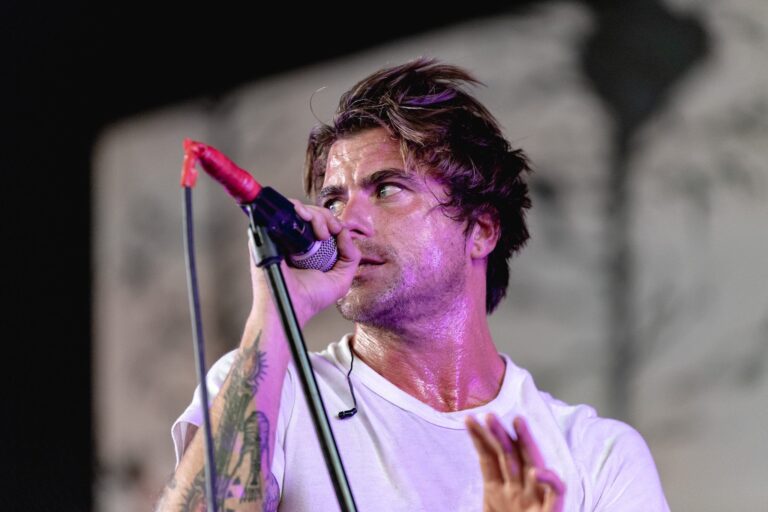 PHOENIX — An unforgiving sun beat down on the crowd at Ak-Chin Pavilion on Saturday, where thousands had gathered for the inaugural run of the Rockstar Disrupt Festival. The sweltering heat forced fans away from the lawn and under the shaded pavilion, where they huddled together for hours of live music.

Orlando-based Sleeping with Sirens served up a blistering early evening set that featured two new tracks from their upcoming release How it Feels to Be Lost, along with live staples “Kick Me” and “If You Can’t Hang” and a smattering of other selections from across their discography, with the notable exception of any material from 2017’s Gossip.

Sleeping with Sirens Setlist
Kick Me
Do It Now Remember It Later
Leave It All Behind
We Like It Loud
Better Off Dead
Break Me Down
If I’m James Dean, You’re Audrey Hepburn
If You Can’t Hang

Prog rock mainstays Circa Survive took the stage shortly before sunset, with frontman Anthony Green commenting “there’s nothing more beautiful than playing music in the desert at sunset.” Green’s soaring melodies on “Child of the Desert” offered a stark contrast to the snarls and screams on heavier tracks like “Get Out” and “Act Appalled,” and the band sounded absolutely incredible.

As darkness fell, Ontario pop-punk legends Sum 41 lit up the night sky with … Most of their set consisted of tracks from Does This Look Infected and All Killer No Filler, including their biggest hits “Fat Lip” and “In too Deep,” but they also surprised fans with a punked-up cover of Queen’s “We Will Rock You.” Lead singer Deryck Whibley also confirmed the band would be trekking back through Phoenix this fall on their own headlining tour.