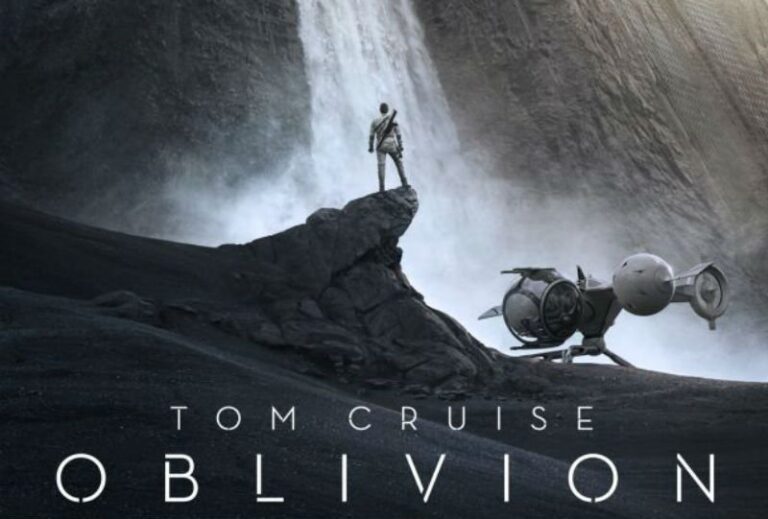 If there’s one thing you can expect from a Tom Cruise film, it’s probably going to look pretty. Oblivion is certainly no exception to this rule, having been directed by second-time only director Joseph Kosinski (Tron: Legacy) whose visuals were clearly the best part of his first film. This time out he tackles the end of the world with mixed results, as Oblivion is gorgeously designed and quite fun at times, but perhaps pays too much homage to 70’s science fiction to the point it feels a bit recycled.

Jack Harper (Tom Cruise) is part of the post-apocalypse cleanup crew on Earth after an alien race called Scavs (Scavengers for short) destroyed the moon and laid waste to the Earth. The humans fought back and won, but lost the planet in the process and had to relocate, so now Jack is left pulling Wall-E duty on the remaining drones and devices that are trying to salvage what’s left of the planet.

Kosinki does a real nice job on the pacing in the early part of the film and you really get to appreciate the wondrous visuals of the world he created, as well as Cruise’s understated but quite layered portrayal of Jack. This film is stunning in IMAX and a perfect showcase for that outlet with Kosinki’s sweeping shots of Iceland, where the film was primarily shot, and lush sunsets and sunrises all done with practical shots.

Where the film drops off in quality is when the story takes a Twilight Zone/Planet of the Apes style twist that thrusts the action into a rehash of other science-fiction films. Sure, the scenes look neat and are fun, but they feel hollow compared to the character piece that the film was shaping up to be.

In lesser roles, Olga Kurylenko (Quantum of Solace) and Andrea Riseborough are pretty strong, especially Riseborough in what could be a breakout role for her – she’s radiant and fantastic as Harper’s wife, who has no interest or desire to seek out more than their regimented daily lives. Morgan Freeman is Morgan Freeman and you appreciate his presence, but he’s an exposition device and not much else.

Oblivion will please the average Tom Cruise audience with its twists and visual beauty. There are some truly cool ideas presented in the film and they’re only held back by lack of exploration. The world feels real and the action has punch to it, but when the final act begins you can’t help but feel that you’ve been there before, and it was a bit better.