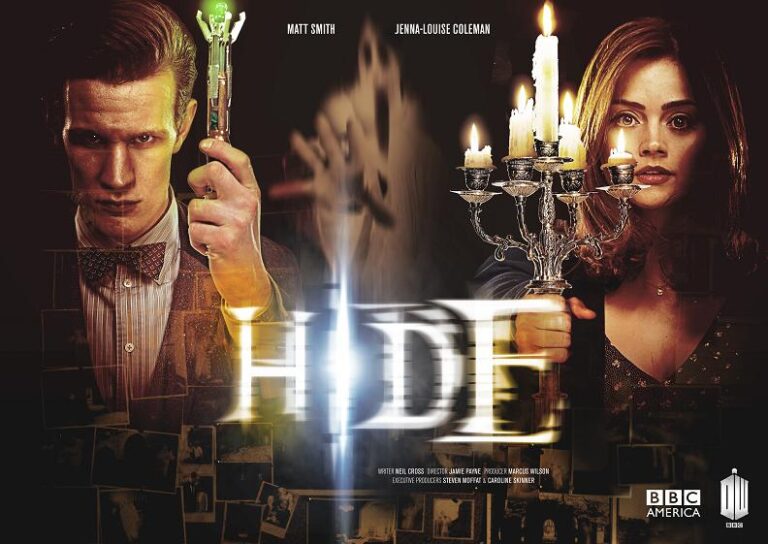 One thing Doctor Who excels at is mashing up different genres and this week’s installment, Hide, is a good example.

On the surface this week’s adventure is a classic ghost story, taking place in a haunted mansion as a professor and a psychic try to solve the mystery of the spirit trapped within. The Doctor and Clara decide to show up for a little bit of fun, because who doesn’t love a good ghost hunt? But The Doctor’s good time is quickly soured when he realizes there’s more than a ghost at the heart of the Witch of the Well.

Neil Cross returns to writing duties this week after his debut in The Rings of Akhaten and has similar results: some truly great ideas but a lot of muddled storytelling to get there. While the beginning half focuses on the romantic tension between professor Alec Palmer (Hemlock Grove‘s Dougray Scott) and psychic Emma Grayling (Jessica Raine), the second half completely flips the genre of the episode with some neat explanations of the phenomenon taking place in the mansion that fit a little bit better into the vibe of the show than ghosts and spirits.

Clara is still acting less confident this time around, but it seems to be an actual plot point and not just uneven writing as I suspected last week in my Cold War review. She is indeed starting to wonder if she made the right decision joining The Doctor, and starts to question his actual intentions after he shows her some unsettling things and Emma gives her some insight into The Doctor’s heart using her abilities. The TARDIS also gets about as interactive as it’s ever been since The Doctor’s Wife in some neat scenes with Clara that are the highlight of the episode.

Hide has some interesting tidbits furthering the overall arc for the season weaved in throughout, and is plenty entertaining, but feels a bit weak when compared to the rest of series 7B. There’s some scares and monsters and sci-fi but outside the communication breakthrough with The TARDIS, it’s largely a fun but forgettable episode.

The real reason behind the ghost. The TARDIS and Clara bonding! The honeymoon with The Doctor and Clara seems to be over.

The ghost segments are pretty generic. The real plot takes too long to kick in. The “love” story (and not the one you think. you’ll see).

A passable and engaging enough episode that has some neat ideas but spends too much time on the generic ghost story making for a step down of quality compared to recent episodes.