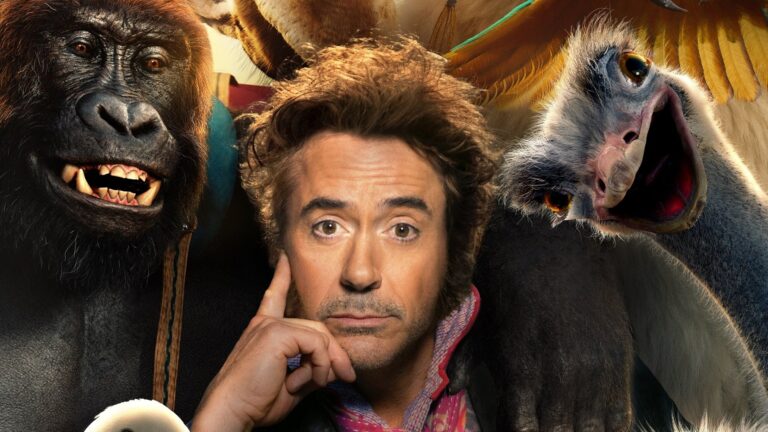 Robert Downey Jr. has enjoyed a modicum of success with portraying updated versions of classic literary characters — the Sherlock Holmes films were great, silly fun. Dolittle, the former Iron Man actor’s latest, is unfortunately a low point in his modern career and a rare dud, despite the best efforts of the charismatic actor and talented voice cast.

The film takes a Hook-like approach in telling a new story of the famed Dr. Dolittle, years after his main adventures, in which the character is no longer the man we remember. After a clear and unsuccessful attempt to mimic the emotional gut-punch of the opening of Pixar’s Up, we find Downey’s Dolittle a broken man, cutoff from human interaction and no longer practicing his veterinary skills beyond the animal friends already living on his estate. Adventure once again comes calling for Dolittle as the Queen of England is in dire need of his expertise, just as a young boy (Harry Collett) with the burgeoning proclivity to also speak with animals unexpectedly shows up on his doorstep.

Dolittle is the type of the film that will really only work for a small demographic: namely, kids 7 years or younger. The humor is beyond juvenile from start to finish with corny puns, slapstick pratfalls, and low level potty humor full of farts and shots to the genitals. Some jokes land here and there, but anyone with the mildest level of maturity will roll their eyes far more often than laugh out loud.

The plot is also convoluted and full of McGuffins of the most basic nature for a family film, boringly used to move the characters from set piece to set piece. Some of the action is well executed and entertaining when the visual effects hold up, but there’s a distinct unevenness to the look of the film throughout. Thankfully the film moves briskly through its nonsense allowing for a hollow, quick ride that really only tastes bad after the fact.

The terrific voice cast, along with Downey and Martin Sheen as Dr. Blair Müdfly, the goofy antagonist, certainly try their best to sell the bad jokes and weak dialogue, but there’s only so much they can do. John Cena is surprisingly good as the chilly polar bear Yoshi, Tom Holland is cute but forgettable as the loyal dog Yip, and Emma Thompson brings just a touch of old-timey class to the otherwise uncouth group as the matronly parrot, Poly. Craig Robinson’s squirrel with PTSD, Kevin, also got the most legit laughs out of me during the film.

Unfortunately, not even Downey comes out clean from this one, with his performance at times being a detraction from the entertainment. The actor certainly wasn’t phoning it in, but his decision to have some type of odd whispering Irish/English hybrid accent was off-putting and at times indiscernible. Other odd decisions such as making Downey and Collett make bad animal noises, rather than dubbing in real ones, to communicate with the furry friends made quite a few scenes unintentionally laughable and ridiculous for a film that already excels in those areas.

Dolittle is perfectly fine as an afternoon weekend spent at theaters with your very young ones, but adults won’t find themselves engaged like a good family adventure should. One silver lining is that older audiences should find at least some enjoyable bits to cling to such as the treasure trove of a cast and the film’s shorter than normal runtime for such a big release.