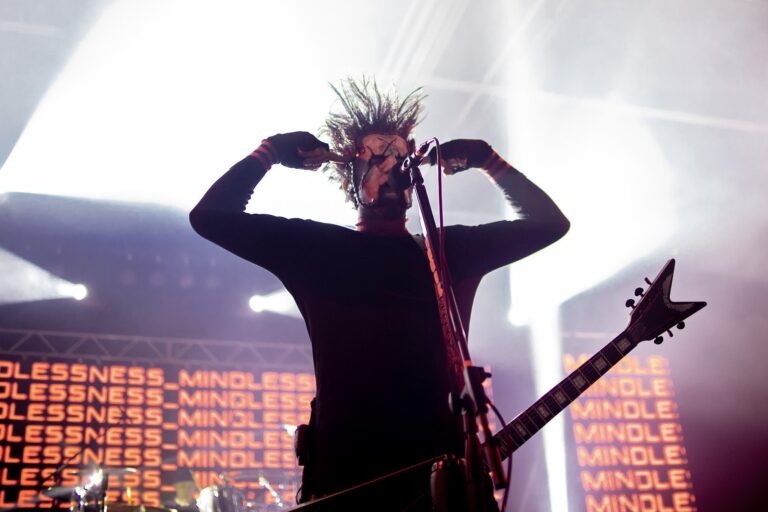 TEMPE — A roar went up from the crowd at the Marquee Theater on Tuesday evening as the house lights came down and LED screens flickered to life with the Static-X logo. Fans had gathered to celebrate the 20th anniversary of the band’s seminal album, Wisconsin Death Trip, and pay tribute to late frontman Wayne Static, who passed away from a drug overdose in 2014.

The surviving members of the original Static-X lineup — bassist Tony Campos, guitarist Koichi Fukuda and drummer Ken Jay — have taken an unorthodox approach to that tribute, generating a fair amount of controversy long before the tour kicked off. Intent on recapturing the essence of their 1999 tour, the band enlisted an unidentified vocalist named Xer0 (rumored to be Edsel Dope), who appeared in promotional materials clad in a ghoulish, decaying Wayne Static mask, with hair spiked up into the late singer’s signature style.

While a certain segment of the Static-X fanbase may have been taken aback by this decision, the remaining band members sought the approval of Wayne’s family before commissioning the mask and moving forward with touring plans. It may be deemed by some as being in poor taste, but those closest to Wayne acknowledge that he always had a macabre sense of humor and would likely have found the whole charade hilarious.

As far as whether or not this unorthodox approach translates to an enjoyable live experience, the answer is a resounding “yes.” With the aid of teleprompter screens placed at floor level on either side of the mic stand, each displaying lyrics and musical cues that he never actually seemed to rely on, Xer0 did a commendable job recreating Wayne’s growls and snarls and evoking his energetic stage presence. Beloved tracks like “Bled for Days,” “I’m With Stupid” and “Push It” all sounded great, and for anyone not in the first few rows, it would have been easy to imagine that Wayne himself had been spirited from the past to say goodbye.

Check out the full gallery of Static-X photos from the Marquee Theater below, and click here for pictures of Devildriver’s performance at the same event. Tickets for remaining shows on the Wisconsin Death Trip 20th anniversary tour are available at Static-X.org