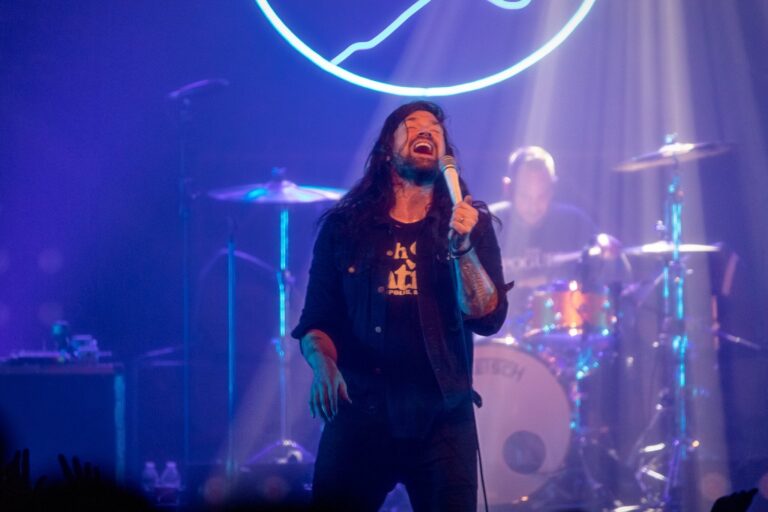 TEMPE — Taking Back Sunday have been on the road of late, celebrating their 20-year anniversary with a series of shows featuring full-length album performances. The band took the stage at the Marquee Theater on Friday for the second night in a row, with a set that showcased their debut record, Tell All Your Friends, as well as its follow-up, Where You Want to Be.

From the first chords of “You Know How I Do” to the overlapping vocals of “Cute Without the ‘E’ (Cut From the Team),” the capacity crowd in Tempe shouted along with every word. Frontman Adam Lazzara was electric as he twirled across the stage, whipping the microphone around his body and crooning some of the band’s most recognizable songs while guitarist John Nolan harmonized.

Lazzara took frequent breaks to relate anecdotes from Taking Back Sunday’s history, including the origins of the piano-based intro to “The Blue Channel” and amusing stories from his years as Nolan’s roommate. He also spent plenty of time interacting with fans, whether it was playfully teasing a clearly inebriated fan who had requested a song the band had already played, or offering his sincere gratitude to the audience for buying their records, merch and concert tickets over the past two decades.

Check out photos from Taking Back Sunday’s show at the Marquee Theater below.

Setlist
You Know How I Do
Bike Scene
Cute Without the ‘E’ (Cut from the Team)
There’s No ‘I’ in Team
Great Romances of the 20th Century
Ghost Man on Third
Timberwolves at New Jersey
The Blue Channel
You’re So Last Summer
Head Club
Set Phasers to Stun
Bonus Mosh Pt. II
A Decade Under the Influence
This Photograph Is Proof (I Know You Know)
The Union
New American Classic
I Am Fred Astaire
One-Eighty by Summer
Number Five With a Bullet
Little Devotional
…Slowdance on the Inside

Encore
Flicker Fade
What’s It Feel Like to Be a Ghost?
All Ready to Go
MakeDamnSure