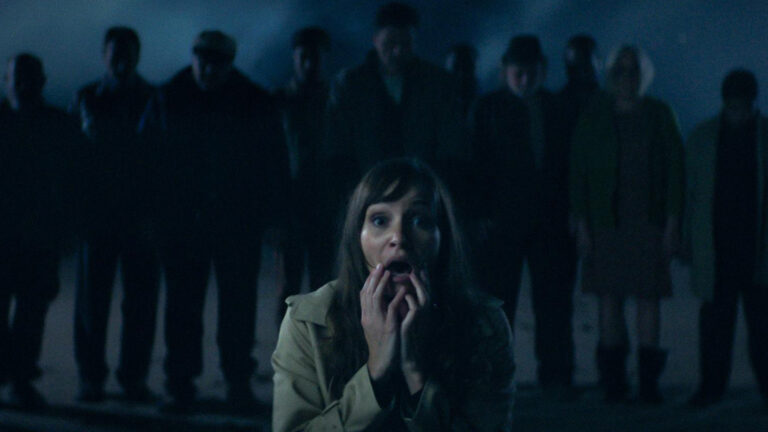 Horror director and SXSW alumni Mickey Keating (Carnage Park) returns to the Austin-based festival in 2021 with his latest feature, the nightmarish thriller Offseason, starring Jocelin Donahue as Marie, a woman who travels to a secluded island town and unwittingly becomes trapped in a series of increasingly terrifying circumstances.

“I wanted to do something that was evocative of old Southern Gothic literature,” Keating told us last week during a Zoom call with Donahue. Noting that his previous work had been more along the lines of “loving references” to specific directors or films that had inspired him, Offseason was conceived as something “something that would be a little bit less what you’d expect from a traditional horror movie, and a little more surreal and strange.”

Marie arrives in the sleepy little town of Lone Palm just as the tourist season comes to a close, accompanied by romantic partner George (Joe Swanberg). From the early moments of the film, it’s clear their relationship isn’t in great shape, and the fragility of their bond makes for a unique dynamic. “You just don’t usually see people in this kind of tense situation where their relationship is also unstable,” said Donahue. “We’re dropped in on them during this very tense moment, but meanwhile they have this existing backstory and history that makes it harder for Marie to trust what she’s going through.”

The film was shot in and around New Smyrna Beach, not far from where Keating grew up, but the town had changed considerably since his early years. “When I got there to scout, I hadn’t realized how much it had grown,” he told us, noting that the actual town isn’t quite as desolate as the seaside village depicted in the film. “I didn’t realize all the Canadians come down during that time of year, so while we were filming we had to clear out the main street of this little town, and we had all these Canadian tourists upset because they couldn’t buy their custom olive oil or whatever.”

Keating employs a number of techniques to give Offseason an oppressive, almost claustrophobic tone, with the seaside town often shrouded in thick layers of fog. The visual style is reminiscent of a popular videogame series, and Keating wasn’t shy about acknowledging the influence. “Silent Hill 2 scared the shit out of me when I was twelve years old,” he said with a laugh. “I’m a huge Silent Hill fan, a huge Fatal Frame fan, so if you saw some inspiration, that’s great!”

Offseason features a brief but pivotal appearance from Richard Brake, a prominent character actor and frequent Rob Zombie collaborator. In fact, it was his opening scene in Zombie’s 31 that left Keating dying to work with him. “This dude walks into a close-up and stares at the camera unblinking for minutes on end,” Keating exclaimed excitedly. “He was just so captivating. I thought I was going to have to beg him [to be in the film], I didn’t think he would ever even take my phone call.”

Donahue was also excited for the opportunity to work with Brake, and the two share an incredibly tense sequence during the film’s third act. “The chance to face off with him in a scene was amazing,” she recalled. “Richard is just such a strong presence, and he’s so scary in this movie. That night was just so intense, he’s such a pro.”

“He’s the sweetest guy,” Keating revealed. “But he plays the most vicious characters. He’s one of those actors that you can just set up the camera, and he goes absolutely wild.”

Neither Donahue nor Keating are strangers to the horror genre, but neither of them get particularly spooked by the supernatural. “Stuff like this, that’s nightmarish, gets under your skin,” said Donahue. “But real-world horror is what really freaks me out.”

“The things that get to me are the things that people do to people,” echoed Keating. “That’s what frightens me. As you can see with Richard’s character in the movie, blind devotion to anything is potentially a very dangerous thing. I’m definitely very scared of that, of mob and cult mentality and the lack of reason that can come from that. That kinda keeps me up at night.”

“Also, deepfakes are scary!” he said with a laugh, but we’re not entirely sure if he was joking.

Offseason premieres on Wednesday, March 17th as part of the SXSW Online lineup. Find more of our SXSW 2021 coverage at this link.