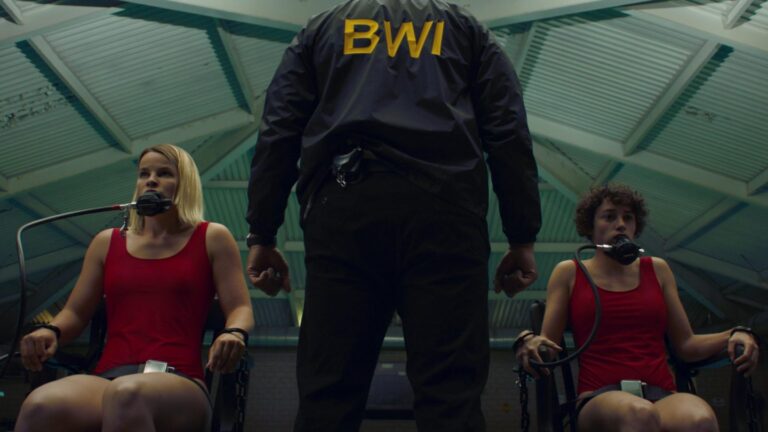 The SXSW Film Festival has always welcomed genre films with open arms, and even though the ongoing COVID-19 pandemic has turned the festival’s 2021 edition into a strictly digital affair, the lineup still boasts a number of spooky stories for horror fans to check out. One of our “must see” picks for SXSW 2021 is Witch Hunt, writer-direction Elle Callahan’s follow-up to her 2018 film Head Count, which posits a modern-day America where witchcraft is not only real, but prohibited by law.

“I’ve always wanted to make a movie about witches,” Callahan told us via Zoom last week. Partly inspired by HBO’s True Blood, where vampires attempt to integrate into society, she wondered “what would it look like if I dropped witchcraft into modern day? If witches just turned up overnight in America, how would we treat them? How would our laws shift to account for magical others?”

The film centers on Claire (Gideon Adlon), a young woman whose mother Martha (Elizabeth Mitchell) offers a safe haven for fugitive witches as they wait to be smuggled out of the country by an Underground Railroad-esque network of sympathizers. “There’s so much danger that she’s involved her family in,” Callahan said of Mitchell’s character, who pretends to share a neighbor’s prejudiced beliefs to avoid suspicion in a scene which Callahan cites as her favorite. “You can really see how smart and calculated Elizabeth’s character actually is, and how she’s really in control in this kind of soft, delicate way.”

Callahan incorporates many well-known superstitions about witchcraft, including the “sink test,” where a woman suspected of practicing witchcraft is bound at the hands and feet and thrown into a body of water — if she bobs to the surface rather than sinking into the depths, she’s definitely a witch. That Witch Hunt shows this “test” being administered by government agents to a group of teenage girls feels especially harrowing.

Witch Hunt draws clear parallels between the treatment of witches and the real-life prejudice levied toward marginalized groups. To help drive this point home, most of the witches are depicted as having fair skin and red hair. “I wanted to touch on the fact that people who look different will often be persecuted because of it,” Callahan explained. “So I wanted to give them some kind of physical, identifiable trait that would hint that they were magical.”

But there was also a secondary reason for Witch Hunt‘s magic users to share similar physical characteristics. “My sister is a redhead, and was always ranting to me about how there weren’t enough redheads in the movies she was watching,” Callahan revealed. Wanting her sister to feel represented on the screen, Callahan not only made most of her witches redheads, but also ensured they were depicted as “the most powerful people in America.”

“So there you go, now you can’t complain anymore!” she joked.

A digital premiere might not have been Callahan’s first choice, but she acknowledges the unique circumstances under which the film is being released. “I think there’s a magic about seeing a film with an audience,” she said. “But there’s also excitement [about a digital release] because so many more people get to watch it — you’re not restricted by physical seats. I think that’s so exciting for a filmmaker, because my one goal in life is for people to enjoy my art.”

That being said, Callahan is keeping her fingers crossed for a theatrical screening sometime in the future. “I like to watch people squirm,” she admitted. “You can’t pause it when you’re in the theater, you can’t turn down the volume. There’s no escape.”

Witch Hunt premieres on Wednesday, March 17th as part of the SXSW Online lineup. Find more of our SXSW 2021 coverage at this link.